Here's a fun and clean riddle for the New Year! I found the material for it on Krabbe's site. I will provide the link when it is solved.

How many times can this position be repeated, with both sides helping, before either side can claim a draw repetition? No cheating, please! 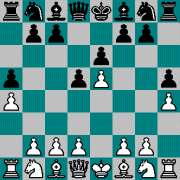 Addendum 1/7/20201: With the acceptance of the answer, here is the link to Krabbe's AD magazine article "TWEEëNTWINTIG FOTO'S," which translates to "Twenty Two Photos."

The board layout can be repeated at most 11 times with White having the move, the 12th will be a draw.

9.2.2 Positions are considered the same if and only if the same player has the move, pieces of the same kind and colour occupy the same squares and the possible moves of all the pieces of both players are the same.

is not a repetition of the original position (it's Black's turn now), although it is the same board layout.

Not the answer you're looking for? Browse other questions tagged problems mathematics threefold-repetition or ask your own question.

18
How many such positions are there? (chess/math checkmate puzzle)
8
Does playing tournament chess help one in the field of chess-related math?
0
EXTENDED New Year's Math Riddle: 5-fold repetition & 75-move rules