How do you read this opening table presented in Modern Openings?

How do I read this table presented in the book "Modern Openings"? Specifically, what do the rows, columns and the dashed lines represent? Finally, there are also little letters like (a) which are probably related to explanations that come up later in the book. 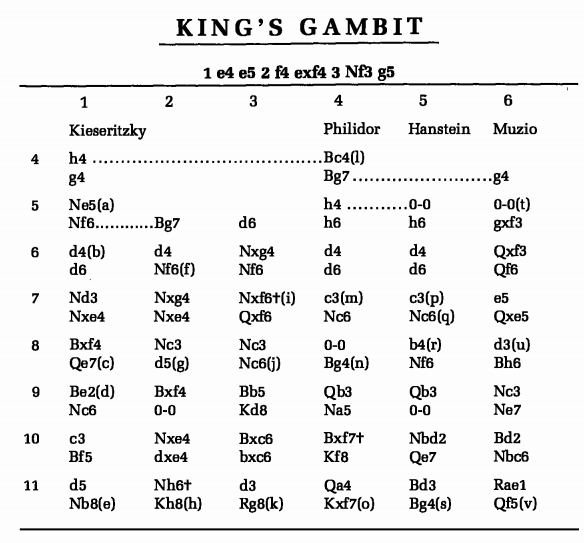 The columns represent the main variants which continues the movements at the head of the table. White's moves are followed by Black's in the same column. The numbers to the left of the table are the movement numbers.

The lower case letters in parentheses are notes, which follow the table, which show alternative lines considered less important or that show possible pitfalls. The mark in the last move of each column refers to the model game. The evaluation of the final position is expressed with words instead of symbols such as = (equal) or + / = (the target is slightly better).

Each column corresponds to a line of play.

A row corresponds to a move; the dashed line indicates where columns diverge from previous columns.

The letters are footnotes which should be at the bottom of the page (sometimes they overflow to the next page). They give comments on the move, most frequently showing why an alternative move does not work out.

23
What is a tabiya and what is their importance?
6
Is 1. Nf3 Nf6 2. c4 e6 3. g3 b6 a QID even though White hasn't played d4 yet? What would you recommend me against it?
1
Books/resources on Scotch (as white) and Petroff (both sides but mainly as black)
2
Advice on how to draw with White
15
Wrong lines of play to illuminate right lines
5
Can anyone recommend a Chess platform that, well, you better read further
12
Books on opening theory organized around tactical/strategic motives, not opening lines
4
Good and in-depth books on Queen's Gambit and French Defense?
3
How much does adding an opening book to a relatively weak chess program affect its strength?
1
How to study highly theoretical openings like the Najdorf, the Grünfeld, or the Ruy Lopez