How to interpret lines of play computed by Stockfish during annotations

I am learning how to use Stockfish to analyze my games, and I had a question on how to understand Stockfish's output.

Consider the screenshot when I request stockfish 12 to annotate my games inside SCID.

As the number in the square brackets refers approximately to the "advantage" (however that may be defined) I would have if I followed the moves in the suggested lines. This is why lines that have the same initial set of moves, have a different score when they diverge e.g. lines 9 and 10 in the output which have scores of 1.12 and 1.25 respectively.

Basically, the fact I am asking these two questions suggests, that I approximately (but not completely) understand what Stockfish is outputting. Sure, SCID annotates via arrows the best move at each position. But what EXACTLY are assumptions for each line of play that Stockfish is outputting? Clearly, it is not outputting disastrous lines of play, so it is not listing the advantages for ALL possible lines of play up to a certain depth.

Also, the lines are numbered from 1 to 21 in the output above, but why is line 2 missing?! The image has not been edited! 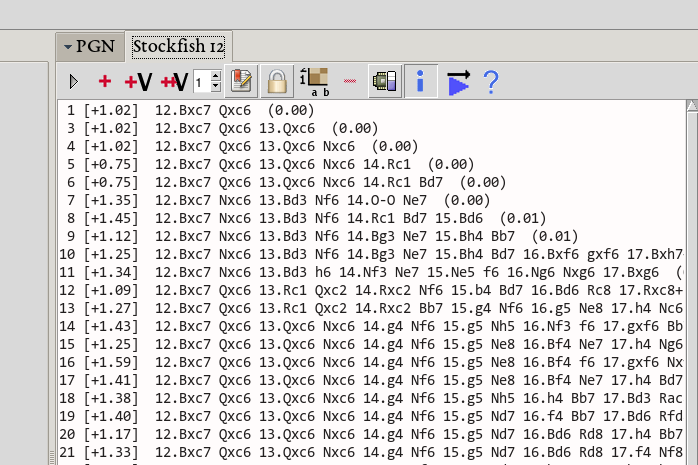 The above output from Stockfish is what's called the Primary Variation (PV), what it considers the best line of play for both sides. But the output is the PV at each search depth: 1 ply from the start position, 3 ply, all the way up to 21 plies.

So at a search depth of 21 plies (moves by both sides), it still considers 12. Bxc7 to be the best move in the current position, with an evaluation of the position resulting after those 21 plies to be +1.33 in White's favour.

If you want to see the evaluation of other moves, then hit the +V button in the toolbar. Click it once, and when Stockfish analyses the position again, it should show the two best variations at each search depth.

I tend to have Stockfish show either 4 or 6 variations, so I can see the relative scores between the moves -- to see if one move is significantly stronger than another.

Stockfish -- as with most "brute force" chess engines -- uses a min-max approach, which ensures that it's considering the best move for both sides. There's various algorithms for pruning and reducing the size of the tree as the search-depth grows, which could have the effect of ignoring what in the longer-term proves to be a stronger move.

If you are interested in the algorithms and patterns that make up Stockfish, try Stockfish on Chess Programming Wiki: which gives a breakdown of the board representation, the searching algorithms and the evaluation algorithms that Stockfish, as well as other engines, use.

7
Why is the latest Stockfish (2.2.2) infinitely slower (than 2.1.1) in Scid?
6
Caro-Kann, Smyslov variation : Can Black punish early 5.c4 in this position?
6
What is the best line in the Fried Liver
4
Output whether the best move is "much better" or only "slightly better" than the other moves
6
Question about the move h5
4
Leaving the score aside, what are the criteria allowing Stockfish to choose its "best move"?
22
Why is Leela so good at beating Stockfish in the French/Slav?
2
SCID vs ChessBase - play, analyse, visualization - ubuntu
2
The best move in this Crazyhouse position according to Stockfish
0
What are some free chess software for showing the best moves in the final output analysis?