An online dictionary of fairy chess pieces indexed by move

While trying to accurately describe the intended movement of the "doubled knight" in this chess puzzle, I realized that what I really wanted right at that instant was a "dictionary" that would let me look up the established name for a fairy chess piece based on its movement (or lack thereof).

Ideally, I'd like to be able to load up a graphical board like in lichess's editor, drag-and-drop pieces (including a placeholder for "my mystery fairy piece") to create a position, and then mark subsets of the squares as "attacked" or "not attacked," something like this: 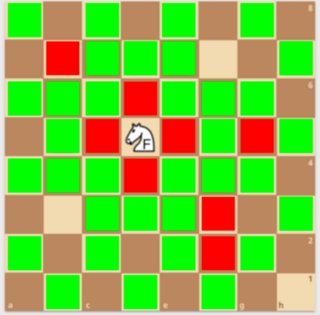 and then the tool would tell me, "Ah, the piece you're referring to is commonly known as a 'Marseillais knight'," or whatever. (Note that I still don't know what my piece's name is.)

Does such a tool already exist anywhere? I've found glossaries such as this excellent one by Stephen Emmerson for the British Chess Problem Society, but nothing that would actually let me look up a piece by "allowed moves," and certainly I've found nothing interactive.

(If, as I predict, no such tool exists yet, I'd be interested to hear about difficulties one might encounter in implementing such a tool, and good authoritative sources of fairy-piece names other than Emmerson's.)

The best tool (online, but not a web tool) was (note past tense) the list you referred to. You need to learn about movement rules (the square root notation, or x/y notation) and base piece movements, but then you can just search for movement rules. (In a few cases, you may need to update it first ...)

It is almost certainly not up-to-date anymore, though, even though it's only two years old, and that makes it non-best by the standards you set. Keeping it up-to-date as well as complete ... is probably a kind of job that very few people would do without being paid for it. Do it once, yes. Do it for five years, ... doubtful.

Some fairy pieces (generally called Mimics, but that term is not in the glossary as far as I can find) get their movement rules from other pieces on the board (see Imitator and Joker for two.)

Some have movement rules that separate movement and attack. In, say, Rifle Chess they apply to all pieces, and may thus be seen as a general rule or condition, but individual rifle pieces have been observed. And many of the conditions described in the glossary can also be applied to individual pieces.

So for pure movement, this might work. But it would require the user to know beforehand that the piece is a pure 'mover', and not a mimic or another type of piece, or the lack of search find would be misinterpreted. That user is probably advanced enough to be able to go to Emmerson's list, or to Encyclopedia of Chess Problems and the relevant articles (Combined Pieces, Hoppers, Leapers, etc.), or perhaps the Piececlopedia. Even so, the probability is fairly high that the piece won't be listed.

Fairy pieces are invented fairly rapidly: a 'piece finder' would not stay up-to-date more than about ... 6 months (guess)? Encyclopedia of Chess Problems warns that its list of combined pieces is far from complete. So there's also a management problem: someone must keep all this updated.

That also leads to the question of being 'authoritative'. As there's no clearinghouse for naming of fairy pieces, this means keeping track of names and discussions in all chess problem literature, probably to the level where actual chess problem activities would be hurt. And one person would probably lose interest after some time, so there must be an active and working hand-over system to ensure it stays alive. (The chess problem community is not known for doing that kind of thing well.---personal note)

I suspect that if there is a tool such as you describe, it will be short-lived. Instead, let the would-be searcher after fairy pieces create his problems without bother about terminology, and then send them to an appropriate fairy chess journal, and the editors will help with the piece names.

(I think it was J. Berger or perhaps Ph. Klett who said that unorthodox chess should be regarded as a disease. You may be seeing one of the effects of such disease ... :-)

(Added: and it just strikes me that fairy chess boards, such as grid boards, or circular boards, or torus boards would probably also add to the complexity of identifying a mover piece.)

(Added again: I would not be surprised if there already was a sub-type of fairy chess problems, where the moves are listed, and the problem is to identify the fairy piece types and their positions that make that solution 'correct'. Hm ... )

There is the Wikipadia page "Fairy Chess Piece" with a table of popular and well known fairies. You can re-order the table by Betza notation or Parlett notation to get an ordering by move pattern. I think this is the best resource available, given your demands.

Not the answer you're looking for? Browse other questions tagged software websites unorthodox-pieces or ask your own question.

19
Resources on chess variants
11
How to solve this puzzle of Martin Gardner?

6
Online Sites For Earning Money Through Chess
6
Other than Fairy-Max, is there a variant [fairy] chess engine that is compatible with XBoard?
16
Why can a chess move improve the chance of winning, according to the computer?
5
Fairy chess: KNNvK
7
Is there a good program to play chess online in ubuntu?
3
Which online chess websites allow you to download their games?
1
Custom message for an online chess game
7
How are online chess engines' architecture designed?
2
Can pieces follow different paths from one square to another in a single move?