What happens if the chessboard is kept with black square on right hand side instead of white square? I think that the notations will change.

Why this is considered a wrong placing of the chess board? Addtionally, does White or Black have an advantage, and will strategies and tactics change?

It's wrong because the rules say so:

Of course, those rules are based on what has been common practice for a very long time. Apparently, an incorrectly placed board happens often enough to warrant a rule for what to do when that happens:

7.2.2 If during a game it is found that the chessboard has been placed contrary to Article 2.1, the game shall continue but the position reached must be transferred to a correctly placed chessboard.

Since the pieces have the same position relative to each other, it doesn't affect strategy and tactics. Notation won't change; the column of the starting positions of the queens is still column 'd'. If you have a board with numbers/letters, it's even easier to spot the problem.

I don't think there's anything in the game that's strictly tied to the colors of the squares. You can still number the ranks and files from the bottom-left corner and e.g. Bishops would start on opposite colors than usual, but the diagonal moves still work the same.

Though, if you set the board up using the mnemonic that the queens are placed on squares matching their color, i.e. white queen on a white square, black queen on a black square, then the setup would be different and the game along with it. But not by much, what you'd end up is this: 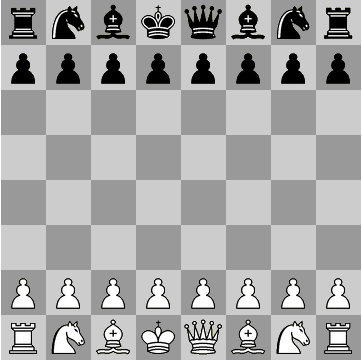 That's just the regular starting position flipped. Since all moves are also symmetrical with regard to left and right, it still technically makes no difference other than that now you'd have to number the squares starting from the lower right to match the notation of a regular chess game. (Counting from lower right, the kings here are at e1 and e8 as in a normal game.)

(Castling is the one move which works differently to the left than to the right, but it's defined by the sides where the king/queen start at, and anyway basically reduces down to "king takes two steps and the rook jumps to the square the king passed" which is direction-independent.)

It makes no difference at all in any way, even if the kings and queens are reversed left to right, or if Black goes first. It's just convention, the thought process, how to play, etc. It's identical other than the callout above about psychologically. Which bishop means more in the French is the example cited, but that's just because that player has that "rule" memorized The reasoning is no different, however.

Not the answer you're looking for? Browse other questions tagged rules chessboards or ask your own question.

24
Another Unusual Mate in One

5
What is the correct placement for the King and Queen on the chessboard?
3
Symmetries in chess
14
What is the result? (Rules + puzzle)
8
Mate with both hands: Result?
27
Why is this a checkmate?
12
FIDE Laws: what exactly does 'colours reversed' in 7.3 mean?
0
Escaping a double check
1
Are there any protocols for folding chessboard, where the dividing line should appear?