leads to a sort of King's gambit reversed. I've had a large winning percentage for this opening as Black in club games. Would this opening be good for a 1500-Fide level tournament?

Yes, I believe so.

The key point here is this:

Play what you know best, and are most comfortable with, and at 1500 FIDE Latvian Gambit is sound enough; this is is probably true even at 2000 FIDE if not higher.

I took a look at some statistics on Latvian Gambit at lichess.org database 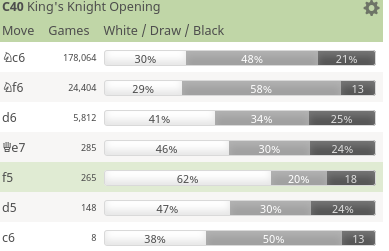 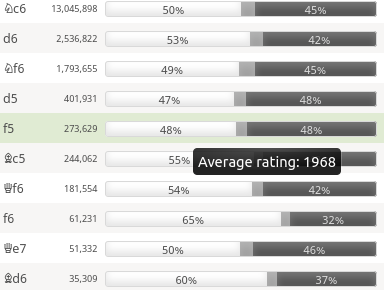 The results indicate that Latvian Gambit is very questionable on Masters level, but at lower levels has good practical results.

It might barely be playable at 1500 FIDE. However, as others pointed out, if someone prepares for you, then you will be in big trouble. My recommendation to to avoid playing this gambit at all costs.

I'm around ~2170 USCF, and my main repertoire is non traditional(morra gambit, kings gambit, alekhine, dutch....). This is coming from someone who's played many gambits over the years.

I tried earnestly to incorporate the Latvian gambit as some sort of surprise weapon. It is just unplayable. Even when my opponents were significantly weaker than me and obviously didn't know what was going on in the opening, they usually get an edge, and it could be a big one too. If they happen to have studied the latvian, then you are pretty toast. I don't even recommend it for blitz. This is just my anecdote, but it's clear to me that for strong chess players the latvian is not sound, and it is not hard for white to deal with.

Absolutely. You can. Even if your opponent plays well and gets an edge, at the levels we are discussing that won't be decisive. But the question is "why?":

If you enjoy or feel comfortable with that particular type of position, and it will make you have a nice time playing the kind of chess that you like, then sure. Go for it!

If your choice is based on results only, then is the Latvian really the best you can do? Of course it's a nice surprise weapon and you can use it against the type of player that will have a hard time against it, but I bet the time you need to have a decent knowledge of the Latvian gambit would be better invested in something like the French (not only in the short term due to the objective advantages but also in the long term as your chess will improve)

I'm assuming you're asking if this would be good for Black to play. If so then it seems fine for a 1500ish level. However, if your opponent is specifically prepared before the game (e.g., with engines and/or a coach), then you might run into some trouble.

You could incorporate this gambit into your repertoire, but I'd recommend playing other lines too, in order to make it harder for opponents to potentially prep for you. If you alternate between 5 lines and this is one of them, it becomes that much harder for people to be ready for you.

19
Bird's Opening and the Dutch Defense
17
Looking for an aggressive opening for black vs 1. d4
12
Is the Grand Prix Attack a poor response to the Sicilian?
6
King's Indian c5 against Samisch
3
What is a gambit?
4
Exchanged Slav defense. Gambit the c6 pawn. Why not?
5
Are there any lines in the Lopez Opening / MacLeod Attack that are actually good for White?
13
What to play if someone ignores your King's Gambit?
2
The Bishop's gambit variation of the King's gambit
1
Lisitsin Gambit Traps