Building up a dataset for image recognition of hand-written scoresheets

I am trying to build up a training dataset to train a convolutional neural network (well, the pipeline will probably be a little more complex, but probably a CNN will be at its core) to convert handwritten scoresheets into PGN.

Does anybody have a (larger) body of scoresheet images + respective PGNs or knows which persons/entities could potentially provide those? Since score sheet formats vary widely between countries and federations I'd be interested in a great variety of them.

Does anybody have a (larger) body of scoresheet images + respective PGNs or knows which persons/entities could potentially provide those?

Aside: As somebody who has been the chief arbiter in a norm tournament I can tell you that such a program, if successful, would be very, very welcome.

Additionally some federations, leagues and tournaments have policies of trying to submit PGNs for FIDE rated tournaments where norms are not available. The English Chess Federation is one such and in it the 4NCL (4 nations chess league) are very good at publishing PGNs.

Entering scoresheets into the computer is often difficult and can be boring. Some people (me, for instance) are not that good at processing a stack of, say, 100 scoresheets. Other people are very good indeed. In England there is one star who is quite brilliant. That is International Arbiter and IM Jack Rudd. I don't know what he does with scoresheets after he is finished but if he doesn't throw them away he will likely have a very large pile. You will see him on the list of arbiters officiating at mega tournaments like Gibraltar and Isle of Man because he is so good at this.

To be useful your program will need to handle languages other than English, including languages which are written from right-to-left like Arabic, Hebrew and Thai.

I should add that arbiters are not particularly strict when it comes to enforcing rules around scoresheet legibility and entering the moves correctly. For instance, although the abbreviations for the pieces may be in your native language, the files must be written in English ("a" through "h") however many players use their own alphabets for these and I don't think I have ever come across an arbiter who enforces this.

Finally, here are a couple of scoresheets from a tournament where I was chief arbiter a few years ago. 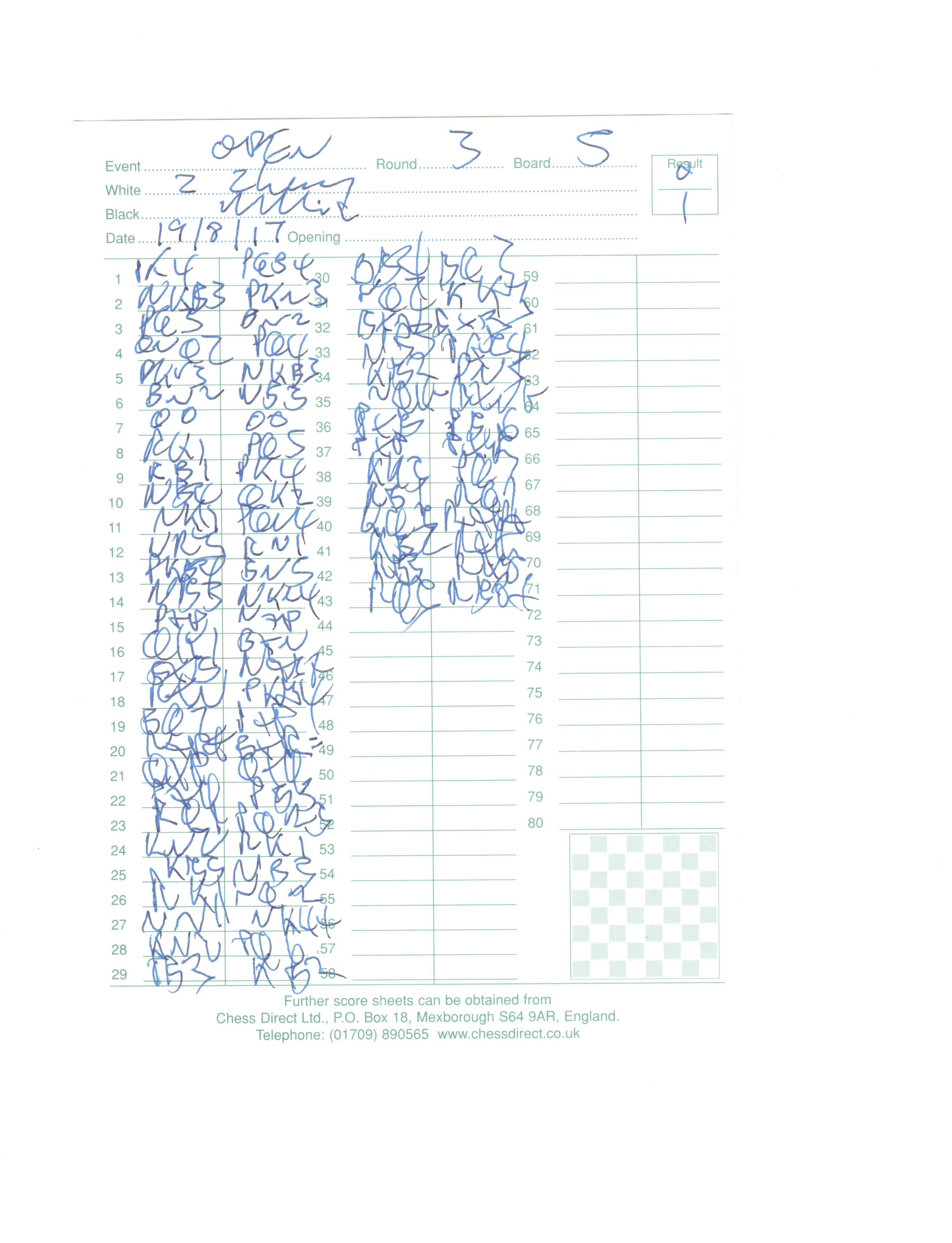 Surprisingly this is one of the more legible scoresheets from this player. He did, though, use descriptive rather than algebraic notation.

Here is a more legal one (algebraic) 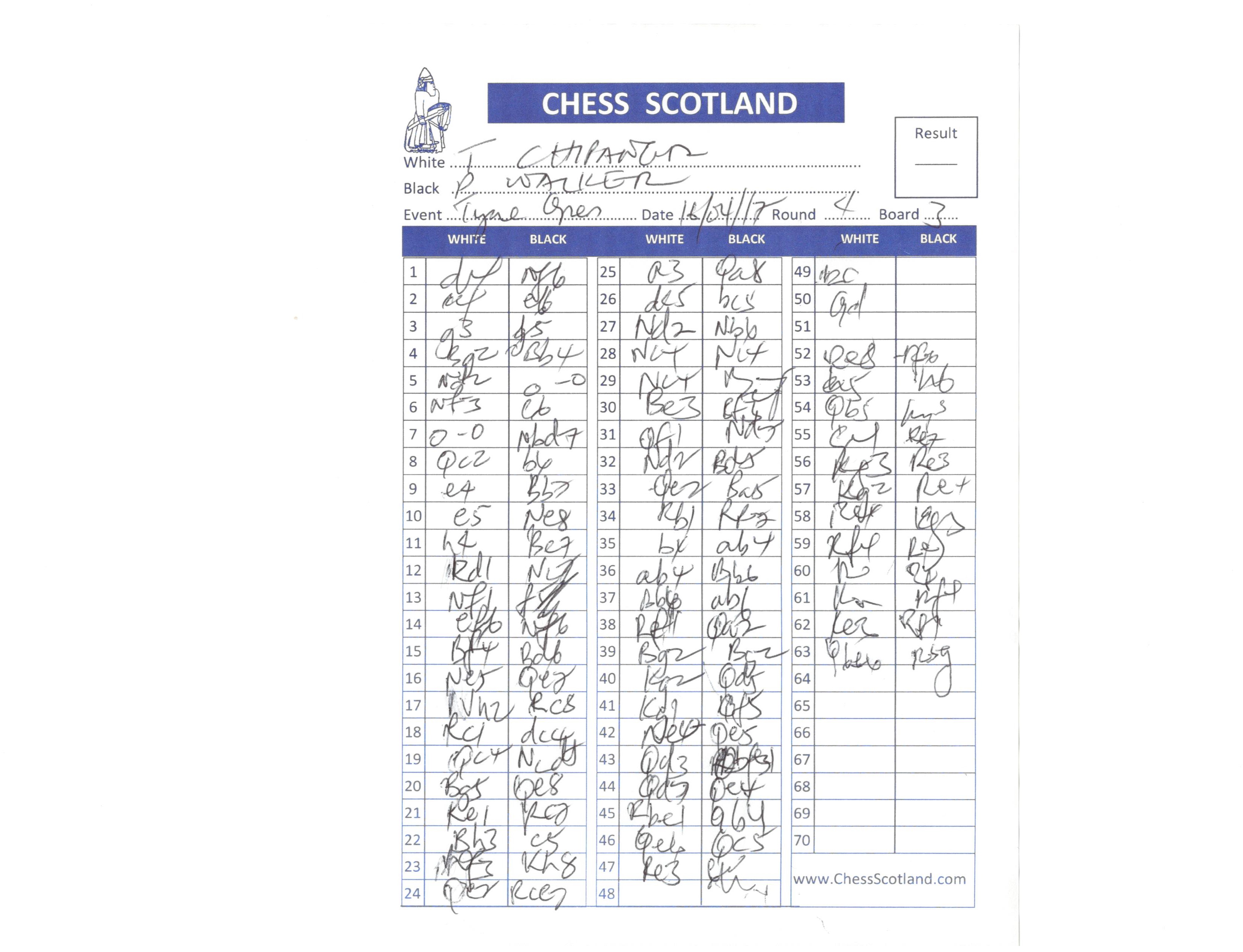 I wish you a lot of luck with your project but I don't think you really understand the problem. Playing chess can generate very high levels of stress in the players and this often leads to problems with how they write the moves.

PS You can download the pgn file for the tournament these games came from from the FIDE website here.

Not the answer you're looking for? Browse other questions tagged pgn notation scoresheet or ask your own question.

15
Is there a text editor with syntax highlighting for PGN files?
2
Where can I find images for vector chess diagrams?
16
Tools for automated notation: webcam movie to PGN
2
What are the most commonly used open digital formats for chess games?
5
What are all of the possible tags for PGN?
13
How is notation done for similar pieces capturing the same piece?
7
Should any information written on the scoresheet by the players be accurate?
8
Question on chess commentary in written form
7
When are both the rank and file required for disambiguation of a move in PGN/SAN?
4
What is the algebraic notation for the bishop?