I have been taking a look at 1.e4 2.e5 2.Nc3, which is known as the Vienna Game. At this point I have become familiarized with a substantial amount of variations and main lines. The principal bifurcation comes on 2...Nf6 or 2...Nc6 by Black, which provides two quite different "systems", since 2...Nf6 allows a strong 3.f4. Apart from this, I have studied quite a number of master games. My overall conclusion is that the Vienna Game is a sound, promising line for the 1.e4 player. It offers positional, strategical struggle in some lines, and sharp aggressive play on others, so players of all styles may find it enjoyable. Of course, Black has the chance to equalize if he knows what he's doing, but in what opening is this not the case?

I then want to ask the opinion of more experienced players than myself: do you consider the Vienna Game to be equally good to other 1.e4 lines, such as the Ruy Lopez or the Scotch? Inferior to them, but still god? Or not even good at all? My question comes from the fact that this opening is hardly ever seen in master play, and it is usually only played on blitz/rapid games as a surprise weapon.

The International Master Gary Lane in his book about the Vienna game wrote in 2000 that this opening "has a long history and a bright future". He added

"in these days of computer databases [already 20 years ago!], opening theory has become so intense that some variations have been analyzed to move 30. It is hardly surprising that some 'forgotten' opening variations have been revived by players to looking into unknown territory, and the Vienna is a perfect arena for this."

So, if Vienna suits you, if you like the obtained positions, if you know the main theme (e.g. which pieces to swap, which promising pawn structure to get, ...) go ahead!

In the Big database 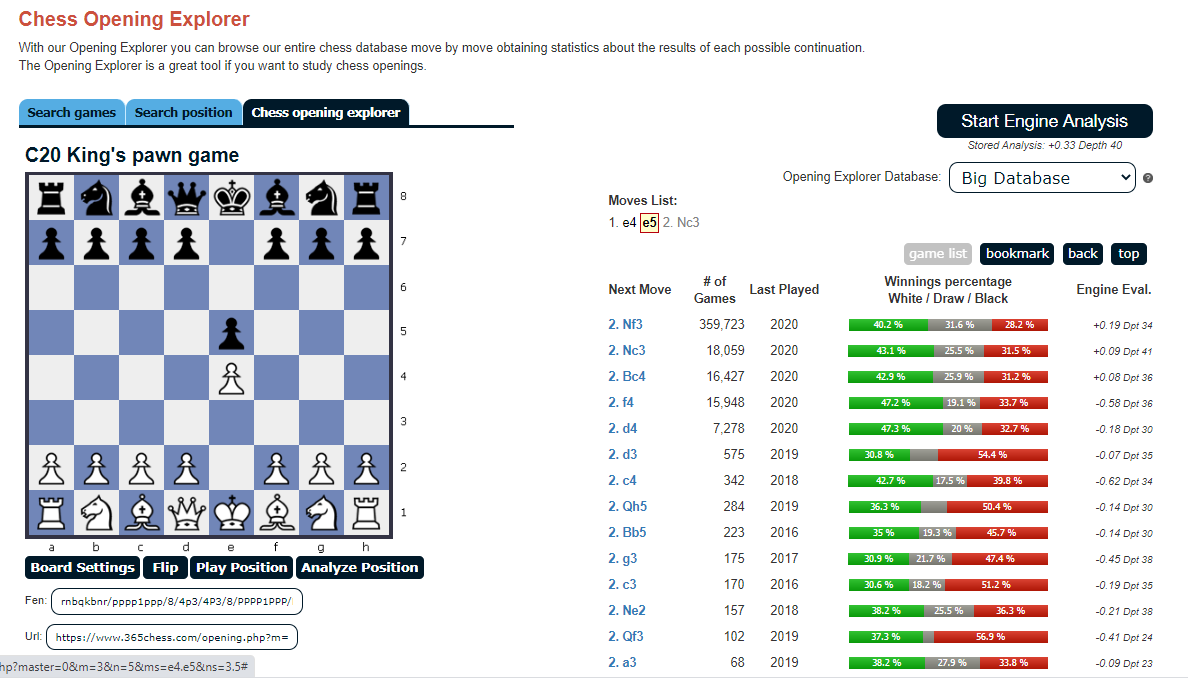 In the Masters database 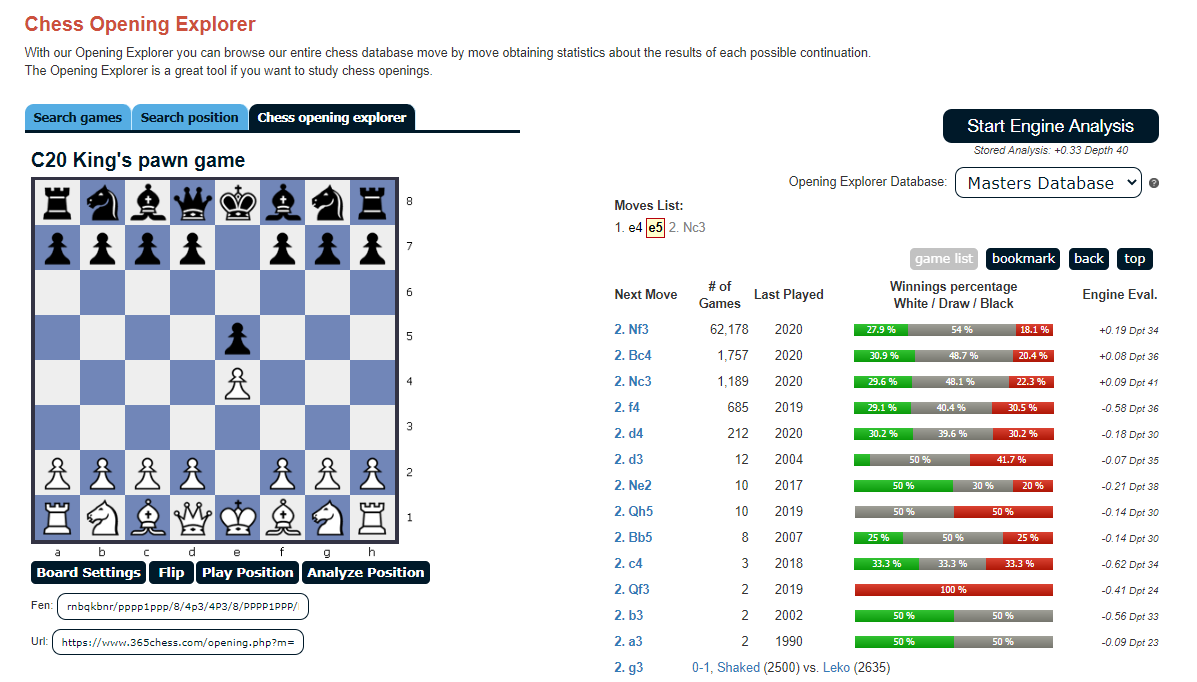 After 1.e4 e5 2.Nc3 Nf6 3.f4, White has definitely a playable position, but it's not that "strong". Indeed, this is the main line and Black should be about equal with correct play. Other lines will most likely tranpose into other 1.e4 e5 positions (say 2...Nc6 3.Nf3 Nf6)

So yes, the Vienna opening is indeed a playable one, probably not "the best", but the difference is not big enough to refuse to play it except maybe at the highest levels of play (if you are rated 2500 or below, you can play it with no problems, and indeed it can be a dangerous, surprising weapon)

However, if you aren't playing at top level (I doubt you are, simply because almost everyone on the planet isn't), then the Vienna is certainly viable. "Winning" in the opening is mostly a matter of reaching a playable position one is familiar with while the opponent isn't. At club level you can certainly expect opponents to know a lot more about 1.e4 e5 2.Nf3 Nc6 than they do about the Vienna. In fact it's entirely possible that your opponent is out of book after 1.e4 e5 2.Nc3 Nf6 3.f4. This move flips Stockfish's eval to negative, but if opponent has never seen this position before, will they even know that 3...d5 is the only move that doesn't lead to an advantage for White? I doubt it. They could very well react with 3...exf4 (after which 4. e5 Qe7 5. Qe2 forces Black to play 5...Ng8) or something even worse like 3...Nc6 (after which 4.fxe5 Nxe5 5. d4 pushes Black off the board). Wikipedia says as much:

However, lines other than 3...d5 give White at least an edge, making this a good choice for aggressive play at lower levels, where opponents are unlikely to know that 3...d5 is best.

Of course if you keep playing against the same people they will quickly learn the nuances of the opening, and an opening edge becomes harder and harder to find. But until they develop as good a grasp of the Vienna as you, you will likely continue to score easy wins.

Viewed the above way, the Vienna is a great opening because it's easy to get. If you play 1.e4 there's a very good chance the opponent responds with 1...e5. This is in contrast to, say, the Scandinavian where you might prepare a line but never get the chance to use it.

The Vienna is one of the better openings below international level. Objectively it's probably equal but that's true of nearly every opening. There's only a few openings that can even try to claim a small advantage nowadays (Ruy, Queen's gambit)

It's great until you reach 2000. After that don't use it as a main repertoire. The main repertoire should be the main lines. Then along the way you can get creative.

Not the answer you're looking for? Browse other questions tagged opening 1.e4 vienna-game or ask your own question.

15
What are openings which were once thought good, but are now shown to be inferior?
10
Is the Scandinavian Defence inferior?
35
What openings are good for the repertoire of a tactical player?
6
Is this line of vienna attack a draw?
2
Traps and alternate variations in the Spanish Game
5
Are there any lines in the Lopez Opening / MacLeod Attack that are actually good for White?
8
Beating the King's Indian Defense: strategic ideas?
4
Vienna Gambit vs King' Gambit
9
Vienna Game: Struggling to find a good response to 2...Nc6
5
Trouble with Opening ideas for 3. g3 in the Vienna game, Falkbeer Variation