When was it possible for a player's king to be attacked by 3 of the opponent's pieces?

3.9.1 The king is said to be 'in check' if it is attacked by one or more of the opponent's pieces, even if such pieces are constrained from moving to the square occupied by the king because they would then leave or place their own king in check.

It wasn't always so.

When was it legally possible in a FIDE rated game of chess to have your king attacked by 3 of the opponent's pieces? Please give an example illustrating this.

In my thread on the English Chess Forum, which seemed to make the world go crazy on the subject, I gave all the major and minor events in the history of the “legal” triple check that my extensive research has uncovered. This loophole was even talked about recently in Episode 20 of "The Chess Pit" at the 12:13 mark. Here is all information in chronological order.

The dubious phrasing in FIDE's laws of chess goes back to the 1984 FIDE Chess Congress when it is was implemented. This is indicated by its first appearance in the 1985 laws-many thanks goes to @Stephen for pointing this out in a comment. Here is the 1985 law on check in whole. (All linked laws come from the Chess Arbiter's Association website.)

9.1 The king is in check when the square it occupies is attacked by one or two of the opponent's pieces; in this case the latter is or are said to be "checking the king."

9.2 Check must be parried by the move immediately following.

9.4 Declaring a check is not obligatory."

Beforehand, the 1980 laws instead stated "The king is in check when the square it occupies is attacked by an enemy piece." This itself is as vague since it can interpreted to allow a king to be left in double check. However, since double check is widely known to be possbile, such an arugement obviously wouldn’t stand. Even so, it is no wonder then why they later rephrased it to "one or two” for clarity. But that still wasn't enough, as the saga of the “legal” triple check shows.

Within a few years, at least some people had realized the implications of the law’s wording. This is evidenced by a letter sent by Robert Norman, who is from Dar Es Salaam Tanzania, to "CHESS Magazine", then called "Pergamon Chess,” that was published in the June 1988 issue. This is the oldest known chess problem that utilizes the "loophole."

Thanks to Jonathan Bryant on Twitter, we have a visual of Norman's letter. 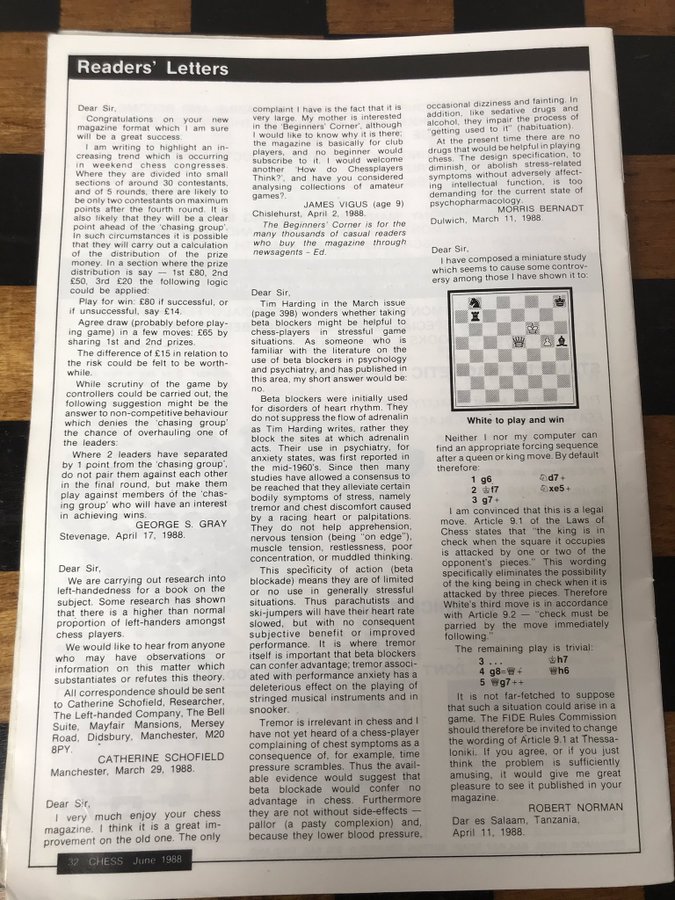 The chess magazine EG reprinted it April 1989, saying this about it: "Definitely an oddity. Ridiculous, irrelevant, amusing or disturbing, as the reader chooses."

Of course, it is arguable as to whether or not it can actually be considered legal. It can be countered that triple check is indeed accounted for in the letter of the law. The aforementioned EG magazine summarized it neatly: **"The argument is that check by three men is not check. Well, one can easily counter that check by three men includes check by two and is therefore covered (not 'specifically excluded') under the Laws, which do not need to be changed." Even under the counterargument, the idea of the triple check alone was enough of an ambiguity to change the law's wording, which definitely says something about it.

Norman’s problem is a online rarity online, so here are a few links to it.

A few years later in 1992, the idea again appeared in CHESS Magazine, then called Maxwell Macmillan Chess, in the column "Addicts Corner" by Richard James and the late Michael Fox. I found the relevant part of the February issue in an old Google forum.

Dead easy. White gets out of check by 2. Nf7 mate. Yes, it's perfectly legit. Consult Article 9.1 of the laws: "The King is in check when the square it occupies is attacked by one or two of the opponent's pieces..." It says nothing about a threefold attack, so White's move takes him out of check..."

It seems that Thurlow's problem spread like wildfire, and FIDE finally got wind of it. This is similar to what Tim Krabbe's joke castling problem did. In a short time, the wording was soon changed to the modern wording at the 1992 Fide Chess Congress for the 1993 laws-"The king is in "check" when the square it occupies is attacked by one or more of the opponent's pieces"

You can find various references to the subject in the English Chess Forum. Most are by Kevin Thurlow in reference to his problem, and some others are by Stewart Reuben, who is an English arbiter who has on the rules commission and helped fix the wording after its 1992 rediscovery.

In conclusion, from 1985, when the effect of the 1984 FIDE Chess Congress change took place a king could hypothetically be left a in a “legal” triple or higher check in a FIDE rated game until 1993 when the law was again rephrased at the 1992 FIDE Chess Congress.

Additionally, this caused some effects on chess composition other than Norman's and Thurlow's joke. There exists a chess variant called ”Bosma Chess" that was created in 1993 by Dutch problemist R. Bosma that is based on the "loophole." Bosma also noticed the odd wording of FIDE laws, after it was changed in 1992, so he incorporated it into fairy chess.

In Bosma Chess a king is not in check if it is attacked three or more times. If a king is triple checked, it can't be captured. Here is an example problem that utilitizes underpromotion to get the point across.

Finally, fast forward to 2008, 30 years after Norman's problem was published, a variation of it appeared in an obscure and now dead blog called "Far Off Chess." that was created by IM Jens Kristiansen. In a post entitled "In the twilight zones of chess rules", which is about old and new ambiguities in the rules, Kristiansen created a version of Norman's study from his hazy memory. It is as beautiful as the original and worth showing.

This is the known history of the "legal" triple check. Whether or not you would consider it legal, the idea was and still is an amusing nitpick at the exact wording of the FIDE laws of chess.

In the comments, @bof has discussed the effects of the triple check, which was only lightly discussed in the English Chess Forum. This section will supplement that discussion.

When triple checked, kings become normal pieces that can castle. Under the 1984-1992 laws, castling into, out of, and through check along with having adjacent kings is legal. However, the main interest is about king captures, which are not forbidden either. The answer is simple-if a king is captured, that side can't be checkmated. This is the only possible conclusion going strictly by the law's letter. This is different from Bosman Chess's immune kings.

Here are problems of mine that show these bizarre conclusions.

Castling Out Of Check

Lastly, here are some bonus problems. On page 3 of in my English Chess Forum thread it was asked if a quadruple check could be done, which I did, but I later managed a quintuple check!

Per another request, I also showed a triple check via en passant.

Lastly, as suggested by @supercat in a comment, here is a mate in 1 that removes two checks for mate.

Not the answer you're looking for? Browse other questions tagged rules problems history fide loopholes or ask your own question.

0
Is it possible to be in check by three pieces?

46
Can a piece pinned to my king put the opponent's king in check?
7
Retrograde analysis of a position in "The Flanders Panel"
9
Rules: How does right to castle and en passant get considered for the purpose of calculating a threefold repetition?
11
Touch-move when move is illegal but opponent's piece can be captured by another piece
7
When exactly does a checkmate or stalemate take effect?
25
Is rotating a pawn so that it faces a different direction and then moves in that direction technically permitted according to the 2018 FIDE Laws?
10
Official rules for castling in Chess960? (Is there a loophole?)
17
Can a player resign after checkmating their opponent?
7
Does a loophole still exist in the defintion of castling?
17
What is the process for amending the rules of chess?