Why are chess.com opening names and notations seemingly mismatched? 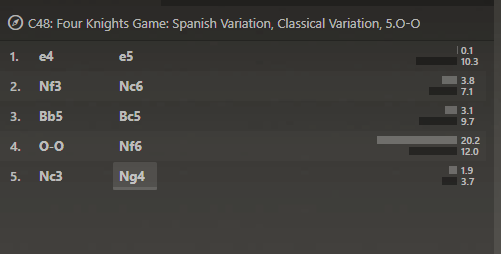 I often see something like the above when playing chess online. When I played Ruy Lopez and my opponent played Classical Variation, but I transposed us to Four Knights Game Spanish Variation, I had castled in between the Classical move and the transposition (Move 4).

It seems the reason the opening name says "5. O-O" because it one of the openings where the order of moves doesn't matter. But is this a bug in chess.com or intentional for the opening name to be mismatched with the move numbers?

opening online-chess notation
Share
Improve this question
edited May 30 '20 at 2:59

I think this is intentional. The opening name alludes to the position reached, not the route taken to get there. The principal move order to reach this position is to start with the classical variation of the Spanish variation of the four knights game and play 5. O-O.

It wouldn't make sense to say Four Knights Game: Spanish Variation, Classical Variation, 4. O-O because if you had reached it from that route then you wouldn't have castled on move 4. While it would make sense to describe it as a Ruy Lopez with 4. O-O, it would be undesirable to list the same position under two different openings.

Not the answer you're looking for? Browse other questions tagged opening online-chess notation or ask your own question.

3
Kind of popular variation in Tournament
5
In ChessBase 12, when viewing an Opening Tree, why do all the games always stop near move 26?
2
Understanding Bb5 after Nc6 in the opening
4
About how to respond to this atypical black defense in the Ruy Lopez
8
Why is 5…Be7 played before …b5 in the main line of the Closed Ruy Lopez?
6
Can anyone recommend a Chess platform that, well, you better read further
4
What are some ideas for black in the Ruy Lopez when white plays an early d3?