What arrangement of 8 each of these 4 different compound leapers has the "strongest coverage properties" on a 16x16 board?

The 4 compound leapers I'd like to look at are:

What arrangement of 8 of each of these 4 compound leapers (a total of 32 pieces) has the "strongest coverage properties" on a 16x16 board, defined as such?:

If any riders were in the mix (rooks and bishops are examples of rider pieces; rooks the (0,1) rider and bishops the (1,1) rider), I would add that "a square that a rider's path to is blocked is not covered by that rider"; my intention is for this definition to be generalized to any combination of pieces on a board of any dimensions.

(I should double-check; is this "strongest coverage arrangement" I'm defining already a thing which there is another name for?)

This is the best arrangement that I've been able to find by hand. It covers 248 squares at least once; missing the 8 squares which are the 2 knight moves outwards from each of the center 4 squares. If I've counted right, I believe it covers 148 of those 248 squares at least twice each. I don't expect triple-covered squares to be a tiebreaker for this question and it's difficult to do by eye, so I admit to not personally counting which and how many squares are covered at least 3 times each in this arrangement. 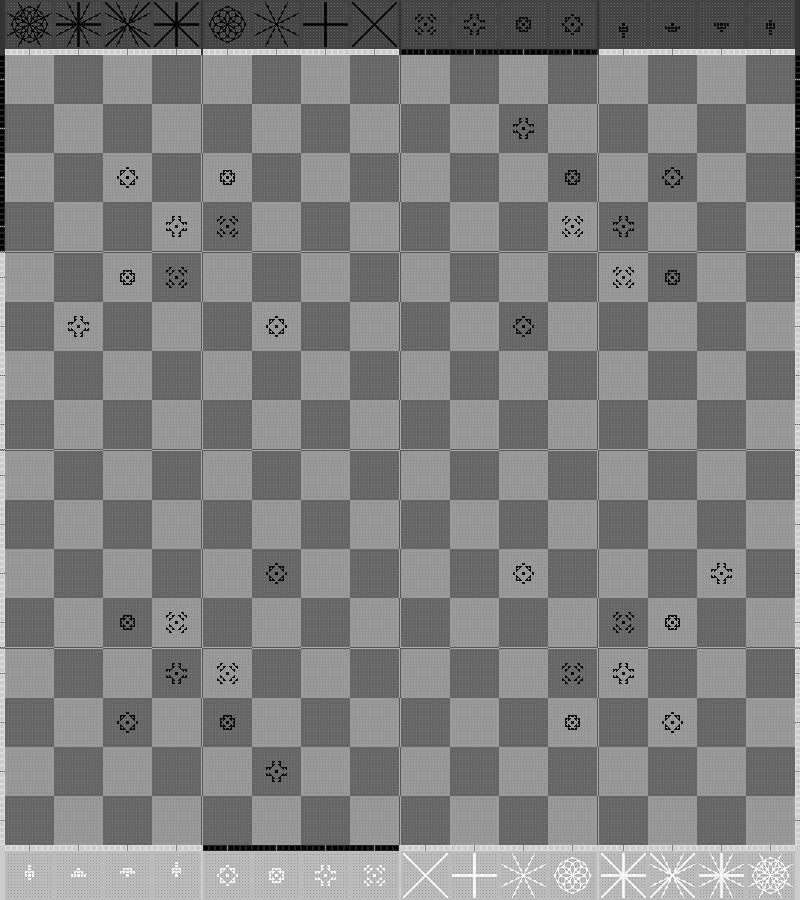 1
What's the average piece density?
2
Funny games for 1 player with chess theme
3
Fairy endgame statistics for KDDDDvKN (D=dabbaba; '2,0' leaper)?
5
What is the maximum number of squares 8 queens and 8 nightriders can attack on a 16x16 board?
7
16 roses, 16x16 board; maximum double-attacked squares while all 256 squares are attacked at least once?
12
Is the number of legal chess positions odd or even?
3
How many possible chess moves are there?
0
How do I evaluate the value of every piece in Mathematical Chess?
4
What is the maximum number of moves in a position of Crazyhouse?
11
Are knights more powerful in Duck Chess?