Challenge: Create the longest set of moves where the game is able to be perfectly reproduced from only current board state and move number

The challenge is to create the longest list of half moves whereby an AI could re-create that list of moves perfectly only given the ending board state and the number of moves.

As example I will first give a short example that does NOT work.

From that final board state, it is impossible to differentiate it from 1. b3 a6 2. a3

And a short example that DOES work

There is no way to get this board state in exactly 2 moves other than what was done here.

Scoring will work as follows 1. +1 point per move 2. +5 points if the game is complete (the last move in the sequence is a check mate)

My best solution so far is

This would score 21 points: 1 point for each of the 16 moves plus 5 points for ending in a checkmate for black.

Note: opening pawns moving 2 spaces instead of one is necessary in this particular solution. A 9 turn game where the pawns each move one space per turn would be undifferentiated from an identical game where pawns open with the two space move and then rooks spend an extra turn making their first capture. Also, the game cannot be extended by slipping in Bxg2 at any point in time for white, because it would be unclear, when looking back, when such a move had occurred, since there are several possible turns for such a move to occur.

The current length record is an astounding 57.5 moves (115 half-moves):

This length record was reportedly beaten in 2017 by Pronkin, Frolkin and Keym (to 58.5 moves) but unfortunately it turned that the longer problem had more than one solution. I do not know if the authors managed to make the problem sound.

Although this problem is not computer-checked, it has withstood human testing for 41 years, so it might as well be considered computer checked by the greatest computer of them all-the human mind.

Such a sequence of moves, where there is only one way to reach the given position on the given number of moves, are called Shortest Proof Games. There are many chess programs that solve such problems.

Long chess problems like this are usually checked with computers using these specially built chess programs, i.e. they are the A.I. that finds the solution you speak of in your answer. The longest one I know of that is computer checked and verified, often shortened to C+, is *41.5 moves*** long according to the Die Schwalbe database.

By your system, this problem has a score of 83 points.

The longest computer-checked one ending in checkmate that I know of is worth 59 points, 54 for the moves and 5 for the mate.

Also, your proof game in 8 moves is computer-verified by Jacobi. 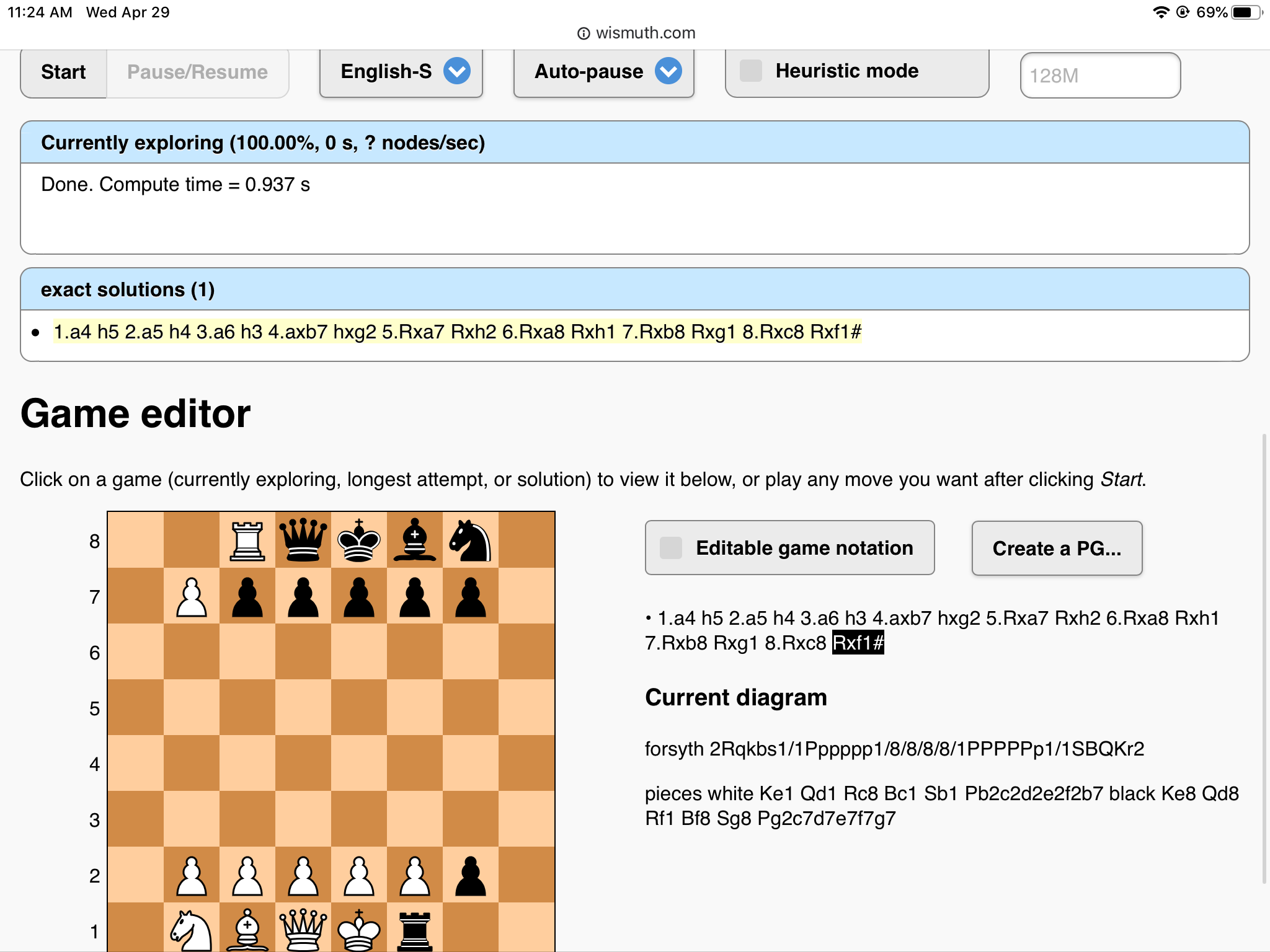 Not the answer you're looking for? Browse other questions tagged problems retrograde-analysis or ask your own question.

18
What is the origin of this breakthrough combination?
7
Retrograde analysis of chess in The Flanders Panel by Pérez-Reverte
10
What is the longest known stalemate your opponent in x-moves problem?