Imagine we are pitting two automated players (bots) against each other, but instead of thoughtful moves made by the players, they make completely random choices. I realize that this is not really the point of playing chess, but it sets the groundwork for a theoretical chess question.

'Inherent advantage' here means that the probability of one player winning is higher than the other, and that these randomized conditions don't account for how actual players would play. If such an advantage exists, it may be entirely wiped away by how humans play chess with each other. I want to emphasize that this question is not meant to generalize to either human or algorithmic play.

I once wrote a program to make random moves, had it play 1000 games, and these were my results:

The sample is too small to reach a firm conclusion, but as you can see, Black actually won more games than White! (I think that was just luck.) More noticeable, though, is that the overwhelming majority of games are draws.

My hunch is that there is neither White nor Black have any advantage when making random moves. The oft-quoted first-move advantage of White is based on the notion that White has the initiative, but it is very easy to lose the initiative, and if you make random moves you are pretty much guaranteed to lose it very quickly. (Edit: thanks to MaxW's answer, I'm pleased to see that someone actually went through the trouble of simulating billions of games and found that actually White does have a very slight, but statistically significant advantage: 7.7340% vs 7.7293%).

I originally posted the table above as an answer to a different question: If both sides move at random, but legally, then how many games will be a win for White or Black, if not a draw? That answer goes into more speculation about why most games are draws, but more importantly has the Python source code in case it helps run your own simulations.

The first player has a slight advantage. When black has made n moves, then white has made n+1 when completing his turn. Even if black can mate on his n+1-th move black still loses.

EDIT My analysis was too simple, but I got lucky.

Note: This used to be an 'update' in my question, but jafe rightly points out that this is more of an answer in substance.

I got the results back of 1000000 randomly-played games thanks to a small adjustment to itub's code. I've whipped up a basic plot to show the results. 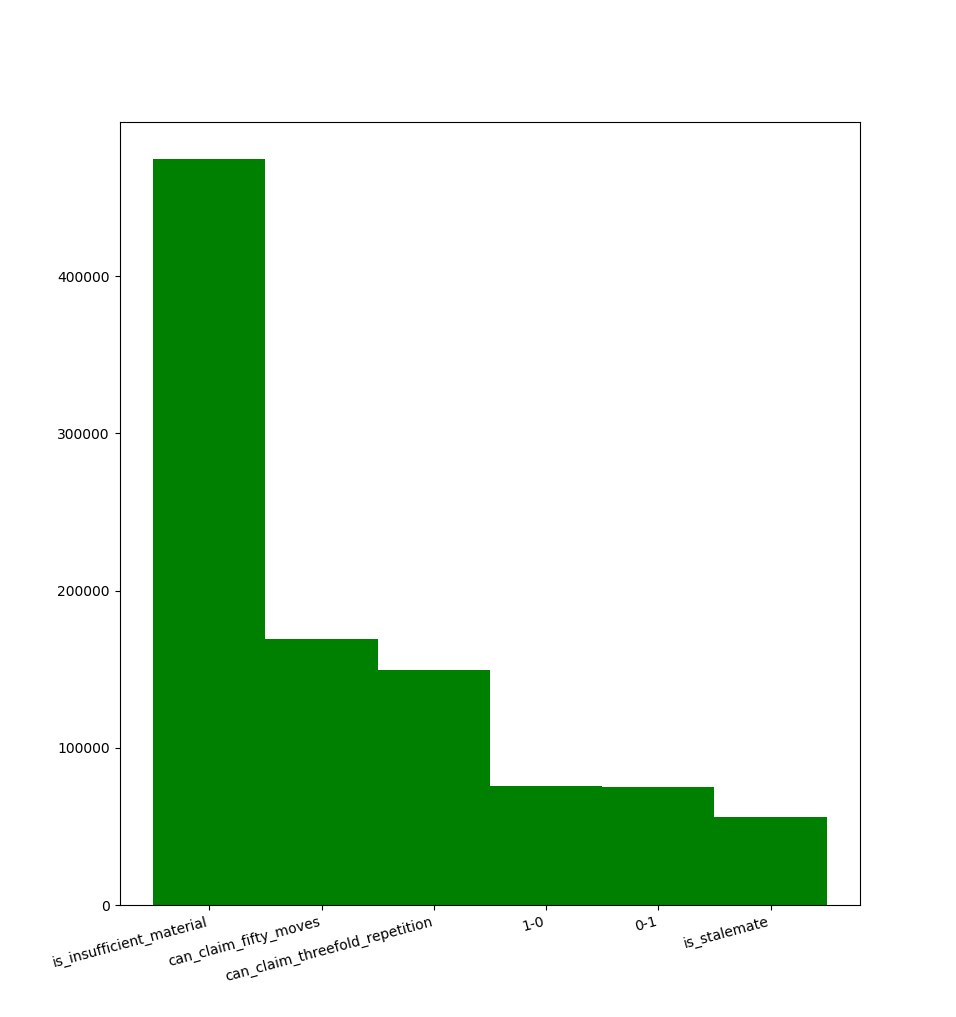 But if you prefer the specific numbers, here's the printout:

As promised in the comments on one of the answers, I was going to calculate a Wilson score interval with continuity correction. I wrote the following function in Python to accomplish that.

And calling this function on the outcome counts where either white or black win, we have:

This result, confirming some of the comments and answers below, is not significantly different from 50 %. As MaxW has pointed out in their answer, a similar calculation has been done on an even bigger sample that concluded that there was a statistically significant difference. One concern I have with all these calculations, mine and others, is that they become more sensitive to deviations as the sample size becomes larger. This means it is difficult to determine whether there's truly a difference using standard null hypothesis testing when our sample size becomes extremely large, but if we don't sample enough then our sample won't be representative enough. What this has illuminated to me is a form of conditional reasoning that if there is a difference, then it is extremely small in terms of effect size.

My thanks to everyone who has shown interest in this post, and contributed their reasoning, research, or code into it.

The preceding answers are great, but I can add one point that has just occurred to me.

The statistical analysis suggests a small advantage for White in random chess. But any mating position can be "flipped" (pieces White<->Black, person to move changed and flip board top<-> bottom) to make a legal position with the other side mating. In other words, there are no cases where the parity present in the starting position can be kept all the way through to checkmate.

In other, other words: in the hugeness of chess there are exactly the same number of mating positions for White as Black. So it's slightly paradoxical then that more random games are won by White. I guess the answer is that to flip the parity requires following some relatively improbable path of moves (e.g. 1.c3 d5 2.c4 to simulate 1.d4 c5).

Not the answer you're looking for? Browse other questions tagged theory computer-chess or ask your own question.

7
If both sides move at random, but legally, then how many games will be a win for White or Black, if not a draw?

27
Does the first-move advantage for White have real meaning apart from the highest levels of play?
2
Do I have to follow the openings moves when the response is different?
4
What are the first moves chosen (White), by brute force chess engines?
4
Theoretically, is the analysis of the moves more complex if the objective is to be the first to be checkmated?
2
What would approximately be the ICCF rating of a GM with no external help and of a computer with no human judgment?
21
What are the things that a 2000 player knows that a 1800 player doesn't know?
5
Can you objectively determine who was the best chess player of all time?
2
Are there any moves in the opening stage that are perfectly sound but not book moves?
13
What are the advantages of keeping the identity of a second secret?