Game analysis - Understanding the potential of this queenside expansion

From the game Samuel Reshevsky vs Henrique Mecking in the Sousse Interzonal (1967).

According to Reshevsky in his book "Art of Positional Play" black wants white to abandon his calm queenside expansion, so black forces white to play on the kingside. I suppose the queenside expansion was seriously dangerous as black decided to risk so much by playing ... f7-f5.

Are there better lines?

I am not trying to be hard on you, but to be blunt, this is one of the dangers of analyzing with a computer, and not having any understanding of the position. That line of analysis you give with 20...Nac7 and then shuffling around the pieces, frankly, did not make any sense at all plan-wise (and even my Stockfish 11 does not agree with your computer's line). I will discuss that in my notes to the game.

I opened my copy of that book, and what Reshevsky, correctly, said was that white has move space on the queenside, and that black needs to look for play on the kingside with f5. White's play, in theory, is generally better, but what Reshevsky also said is that if white blindly pursues his own play on the queenside without any regards to his own king, he can easily lose to a direct attack. That is a common theme in the KID, especially the Classical variation. I have seen many games where white has a Na8, and is up a rook, but is helpless against the mating attack all the way on the other side of the board.

Here are Reshevsky's own words: 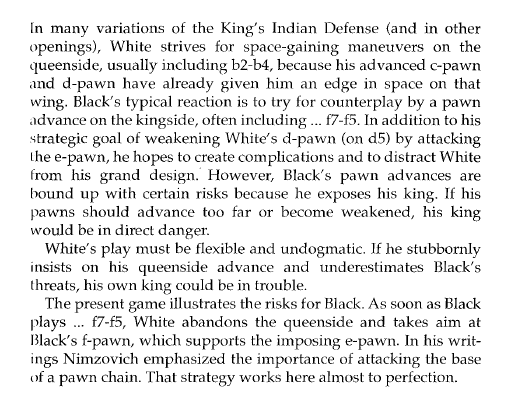 Reshevsky chose to play a line that he was well-prepared for f5, and then actually chipped away at f5, weakening e4, which led to the black king. In the vast majority of KID games, that is not the typical line of play, and white does not often get to be that active on the kingside. In most, white owns the queenside, and black owns the kingside, and each side tries to open their dominate side of the board. In most cases, going passive on your better side, and trying to just defend the other side where your opponent is better, is a recipe for a loss.

Not the answer you're looking for? Browse other questions tagged strategy kings-indian or ask your own question.

17
Is game analysis based on "squares" instead of "pieces" of any value?
5
Is this a good idea for starting the game?
13
Is this endgame winnable for white? (Knight vs two connected passed queenside pawns)
18
Who has the advantage at this point in the game?
3
Is e5 an usual move in positions like this in the King's Indian?
2
Analysis of my recent King's Indian Defense game
15
Understanding Kramnik's play in game 1 of Candidates 2018
4
Understanding Kh1 and Be3 in the King's Indian Defense Bayonet Attack
4
Analysis of a middlegame out of the Queen's Pawn Game: Zukertort Variation
6
Understanding when it's OK / not OK to trade off the fianchettoed bishop