Is there a trick to help kids know which direction pawns are going?

My 5-year-old old daughter very often forgets which direction a pawn is moving. This is confusing especially at endgame studies.

I use a marker pen to draw two eyes on the pawns so that her pawns are facing the enemy and their pawns are looking at her. But this is not applicable online and I am fearful of its side effect when she plays with others on an unmarked board later.

At 5 years old a child's brain is still very immature. The good news is that it is also developing very fast. The easiest and most effective solution is just to wait. Within a year or two the problem will have solved itself as your child's brain develops enough to satisfy your expectations.

On a screen, the pawns are always moving "up".

You know her better, so you could pick on of the following things as an example, and let her compare them to the pawns on a screen.

Or, if you are religious, well there is that "up" too.

When then playing on a board, she would need to realize that they move away from her.

The best way I believe is to put them in front of the board and explain that pawns are so brave they only move forward and never move back. If they know the other pawns are his/her opponent's they would understand they move towards them as it's their’s opponents forward.

The trickier part would be to explain how the pawns eat. I may say that they eat looking left with their left arm, and looking right with their right arm, but never with both at the same time (which would be eating in front of them).

I would suggest at an early age to use didactic games like PreChess. Not sure if that term exists in english, but in spanish we have PreAjedrez games.

You can find nice PreChessgames within http://www.ajedrezparalaconvivencia.edu.uy/preajedrez/ , pity the web is only in spanish by now.

Specifically for practicing pawn moves I would suggest the "Pawn Race" and "Rescuing Snow White".

The clue with these kind of games is to play with less pieces and fewer rules involved. So the kid can focus on the pieces you want him/her to learn how to move.

Note: Just a note about ages. I started playing PreChess games with my son when he was around three years old. He liked very much "searching for the treasure" which was eating pawns with a rook, one by one, trying to eat a pawn in each move. You would create a kind of labyrinth of pawns to eat.

Let me give some description in english so as you get what the games are about:

The aim of the game is to promote one pawn, which would be take one pawn to row 8 for White and row 1 for Black. Of course this game can end in a draw if nobody promotes a pawn.

It's a good game to practice moves and captures for pawns, and to explain the promotion of pawns.

Below you can see the initial set of the game: 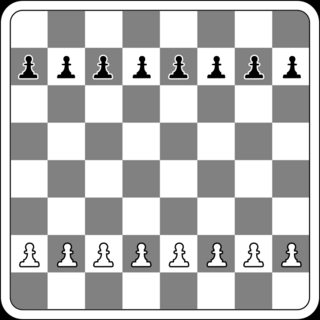 The dwarfs (eight white pawns) need to rescue Snow White that was captured by the witches (two bishops and a horse).

The dwarfs can rescue Snow White if at leat one dwarf gets to the last row and then makes a final move to rescue her (bare in mind that this is not possible in chess. It's a modification to create this PreChess game). Once she is rescued White win the game.

It the witches capture all the pawns then the dwarfs can't rescue Snow White and Black win the game.

Below you can see the initial set for the game: 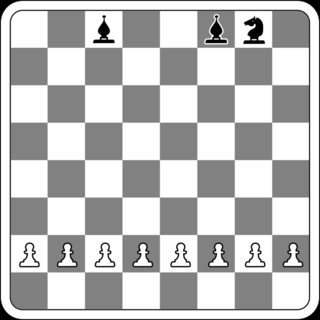 This is similar to helping a kid distinguish "left and right".

You can use stickers with images for fun, for example teddy bears.

I remember seeing in a children's chess book that the pawn is like a peasant armed only with a pitchfork. He marches only forward (one or two at the start, one otherwise). He only attacks to the left or right side. And he never moves backwards.

Not the answer you're looking for? Browse other questions tagged learning children or ask your own question.

20
What are some activities besides chess which help improve chess play?
3
Are there any Linux GUIs that can be controlled via command line?
53
How should I make a 6 year old think more?
8
ChessKid or an adult chess site for a 15-year-old?