What is the origin, or a early appearance, of this famous chess tale?

There is a story I have found across the Internet of an endgame between two players, usually named as Capablanca versus an extraterrestrial of some sort. According to the Spanish chess Wikipedia, the story is used as a demonstration of the logic behind pawn promotion rules.

Whoever the players, and whatever the story’s circumstances, the fantasy game more or less goes as follows.

Player B challenges Player A to a game of chess, which Player A agrees to. Player A plays as White, and Player B as Black. An endgame is reached is which Player A has a great material advantage. Seeing an easy win, they play Kc2, planning on playing Bd4#.

However, Player B, not properly knowing the rules of promotion somehow, sees a defense and plays 1... h1=K!. The point is that Bd4# will checkmate one king, but stalemate the other, drawing the game. Player A argues over the concept that a pawn can “promote to any piece,” but soon grudgingly agrees with Player B’s view of the rules.

Then Player A, after some thought, has an idea and takes advantage of Player B’s interpretation of the rules. Player A plays 2. a8=BK!, promoting a White pawn to a Black king. Player B obligingly plays Kb8, the only legal move with their newfound king. Player A then plays 3. h7 and 4. h8=Q###, checkmating all three kings at the same time, thus winning the game.

However, the origin of this tale is unclear to me, as it is often given with no sources. Additionally, most sources are in Spanish (or at least the ones the feature Capablanca are), so that might be indicative of its history. So far, the earliest date I have traced it to on the web is 2007, and the earliest video is from 2009.

Given that Capablanca became well-known in 1901 at the least for his match against Juan Corzo, the story is at least from then, if not started later in his life, the story is over a century old then. It might also a retelling from the 19th century with his name attached to it, since numerous chess guides came without fully defined promotion rules and chess composers of the era took advantage of it to produce numerous joke problems.

Does anyone of the origin of this basic tale as I presented, ignoring the player names and story circumstances, or an early appearance of it at the least?

UPDATE #1: I found an even earlier mention circa 2004 from this chessgames.com thread. In the linked page, the chessgames user "Phony Benoni," in their 2006 reply to a 2004 comment, said that the tale in question is featured in the book Chess To Enjoy by Andrew Soltis, which was published in 1978. So this puts the tale back as least 42 years. Someone will need to check the book for the composer or other information though, as Phoni Benoni merely gives the source. This is a great lead, however. Also, in the page before, in the initial 2004 post by user metriktracer, another source given is vaguely sourced as one of Andre Soltis's Chess Life columns from quote "twenty years ago or so." That might be another sweetspot if to be located.

Another 2004 reference is an Australian forum, this time with Capablanca against the devil. Now GM George Koltanowski appears to be another suspect for the composer: his name is also mentioned in the above linked chessgames.com thread. According to a comment on a paywalled video that features the tale, "GM Koltanowski told a similar story in one of his books. The Kolty character is Jesse's [the person who made the said paywalled video] way of giving Koltanowski credit for the story idea and ending composition."

UPDATE #2: I contacted Siegfried Hornhecker, author of the ChessBase article linked in @Phishmaster’s answer, to see if he knew anything about the problem. He took another look at the original publication that he quoted story from. I was told that the Amatzia Avni 2017 article, from the Enlgish magazine CHESS lists Chess To Enjoy by Andrew Soltis as its source for the problem. With two different appearances of the book as the source, it seems that the book may very well be the source; all it needs is for someone to check the it to see what it says.

The earlier mentioned George is indeed a real person who composed many problems, with most being from the 60’s and 70’s. This still leaves him very much as a possible author. He also. has more credence that Yuri. Dorogov, I think. A scan of problems revealed this Rex Multplex problem, which is a fairy chess condition allowing for mate to multiple kings. The given source is a humor book he wrote called Chessnicdotes, which means that he had at least the mentality to be the author.

UPDATE #3: @user5713492’s answer has traced the tale even further to a column by Andrew Soltis in Chess Life, 1972 issue, 6 years earlier than his book. Many thanks once more!

“Hey fellas. twenty years ago or so, in his chess life column, he showed a problem with a UFO theme, wherein the losing side (the aliens)not havinig been given the rules properly, promoted a pawn to a king in order to avoid mate, but the contactee was able to checkmate both kings with a single move. this was so clever I actually carried it around for a couple years in my pocket. anyone know of this old gem?” - metriktracer, 4/13/2004

There followed this comment to it that is an amusing, supposed origin story for how Solits got the tale himself.

“It was based on a real event. A teacher had mislead his student by not specifying which pieces a pawn could promote to. So during a practice game, the student attempted to promote his pawn to a king. When the master tried to correct the problem, the student rebuffed him and demanded that they finish the game with the new (or old, depending how you look at it) rules. So the teacher managed to checkmate both his student's kings at the same time. This amusing event later found itself into Soltis' hands apparently. I thought it was pretty cool too, although I don't think the game is in this db. It is probably too hard for the viewer to understand the idea of three kings on the board, although I could be wrong.” - Benjamin Lau, 4/13/20004

I’ve concluded that Yuri Dorogov is the composer after reading the sourced Andrew Soltis book; see my new answer for the deductive reasoning. Also, this problem has appeared on the Schwalbe Database in the meantime.

I found a few references, but the best one was this article on chessbase.com that seems to attribute it to Yuri Dorogov, who was born in in 1947.

From that article, it is still not 100% clear if Dorogov created the puzzle and story, or was just the name of the person the creator used in the story, but Dorogov is a real person. This is a quote from the article:

Yuri Dorogov’s story mentioned in the Avni article is too funny to not retell quickly here. It's white to play and win.

Again, this could mean either his actual work, or the story about him.

It probably had nothing to do with Capablanca, and someone just changed it later to add the famous World Champion.

I finally got around to reading the book Chess To Enjoy by Andrew Soltis after I found that I could borrow it on the Internet Archive. The problem appears on page 207, and the last name "Dorogov" is mentioned, which means that the suspected composer Yuri Dorogov is named in the story attached to the problem, with the usual alien vs person situation.

On page 205, Soltis gives this joke problem by Vladimir Korolkov, before the tale.

Soltis wrote this about the problem: “But, like Sam Loyd, Korolkov always tries to dress up his problems, often with a story. Sometimes his end result isn’t a problem per se but a story-plus-diagram.” Then the story is given, after which. the problem this question about appears.

Soltis wrote this before the tale: “A colleague of Korolkov’s named Dorogov topped this with a tale of meeting a visitor from outer space one day during a Caucaus rainstorm.”

As far I can read this, is means that Yuri Dorogov is indeed the composer of the problem. Since he “topped” the problem, is indicates that, since Korolkov published his story in 1969, that Dorogov published his tale sometime between 1969 and 1972, which is when it appears in the Chess Life Magazine issue linked in @user5713492‘s answer.

It is a minor mystery why Soltis doesn’t give the authorship in his magazine column, but that is perhaps a mystery lost to time.

EDIT: I did some Googling of “Yuri Dorogov”, and went deep into the results and I have concrete evidence of Dorogov being the composer!

Firstly, the site www.newspapers.com gave this clipping from the June 12, 1976 issue The Ottawa Journal, which is from Canada. 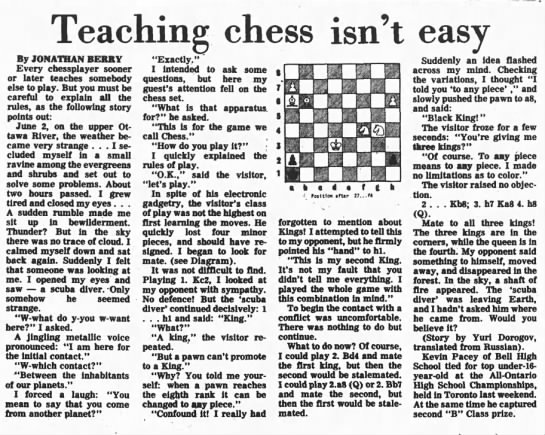 At the end of the short story, the clipping reads “(Story by Yuri Dorogov, translated from Russian).” This is direct attribution to Dorogov.

Secondly, I found a Spanish article entitled “ El marciano ajedrecista episodio 2”-Los increíbles mates de Capablanca contra 9 y 10 Reyes”, which continues what seems to be an Internet tradition for websites using the Spanish language of sharing a game supposedly between Capablanca and a martian/alien.

Roughly transcribed by Google Translate, it says in English that the story was shared an article entitled "El primer contacto con un extraterreste” in the November, 1975 issue of Revista Ajedrez, and in the text the authorship is ascribed to Yuri Dorogov. A picture of the print is helpfully given that confirms it. “Por” means “By” in Spanish, and it says “Por Y. Dorogov” beneath the title, which is direct confirmation that he is the composer. 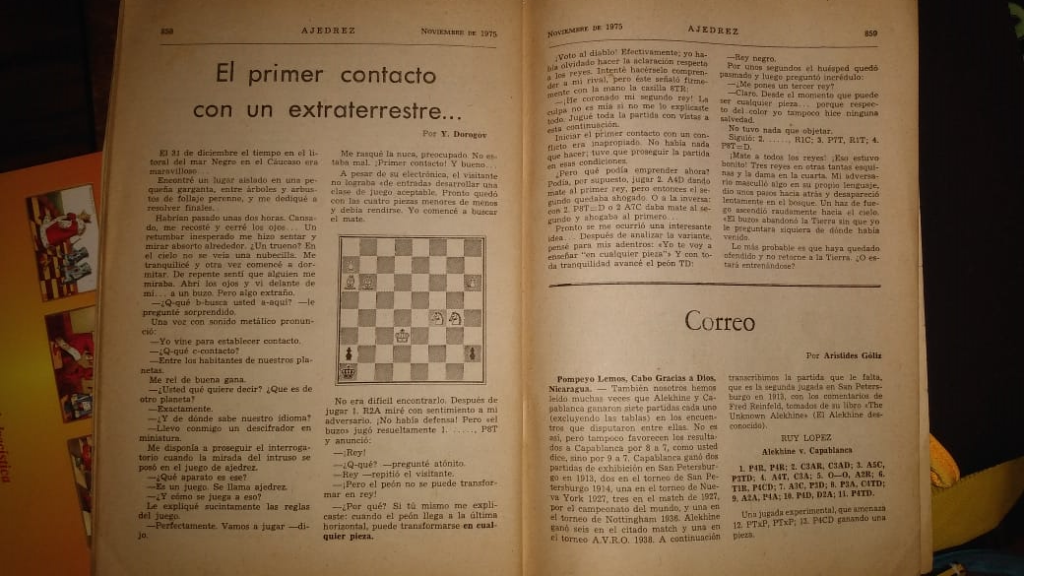 With a known Russian author named Yuri Dorogov and a probable timeframe for it being composed between 1969 and 1972, if not earlier, all that is needed now is to find the original source for the problem.

61
When (if ever) was it a rule that pawn promotion was optional?