I have studied the main line, and I'm beginning to appreciate the key ideas of the Winawer, but still I would like to ask to more experienced French defense players what are the key ideas, notes and/or concepts I should keep in mind while studying (and playing!) this sharp variation? This will make me study with better fundamentals and play with more precision, I hope.

Since the question is posed very generally, I'll only give a rough overview of some of the more typical ideas behind the Winawer for black. I'll mostly focus on positions after 4.e5 as that is the key line allowing white to fight for an advantage out of the opening.

It must be noted that the ideas tend to vary somewhat greatly depending on which specific variation of the Winawer we consider, as there are quite different ways the opening can continue after 1.e4 e6 2.d4 d5 3.Nc3 Bb4 4.e5, namely: 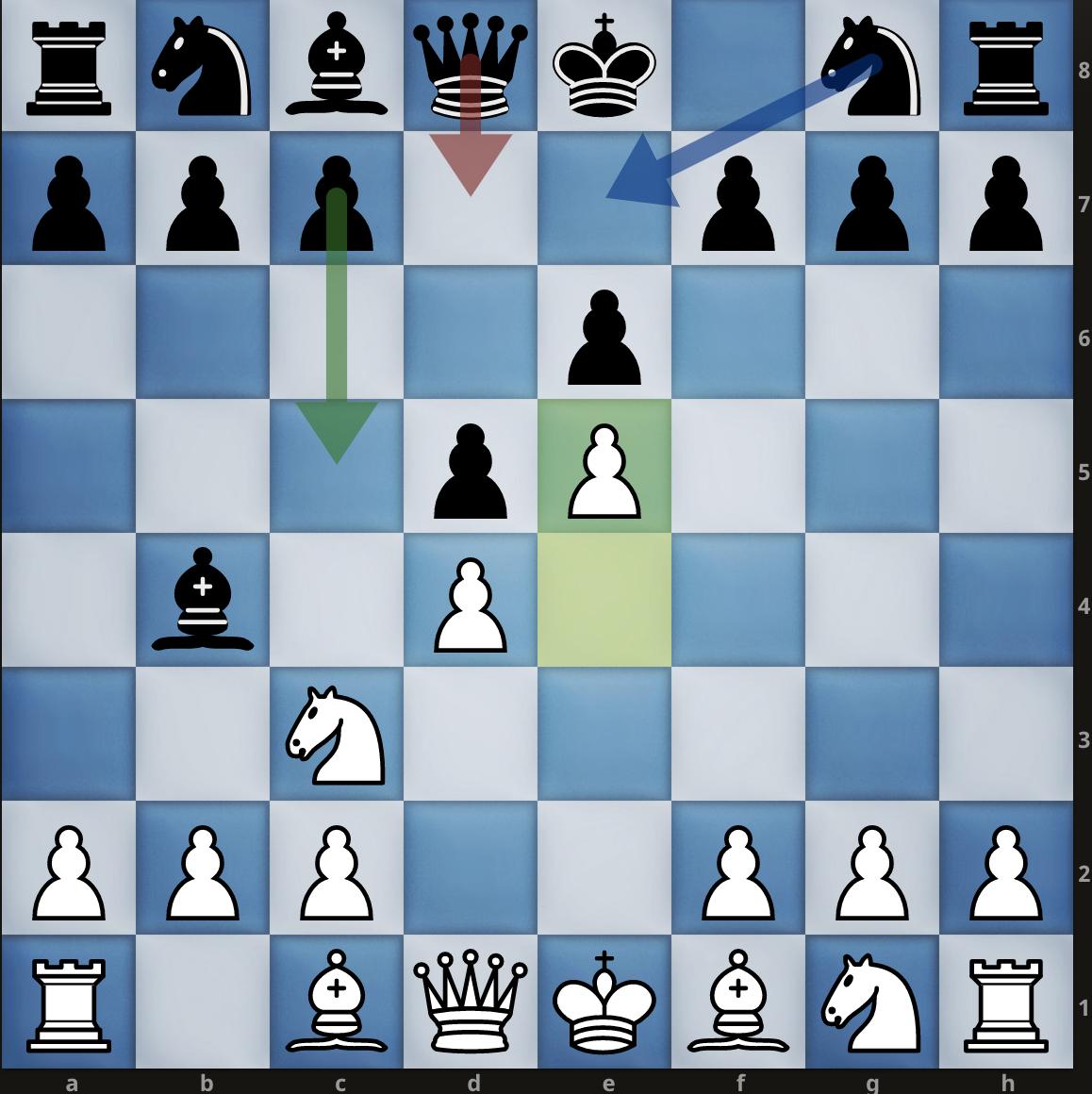 Let's start with 4...c5, and consider the following typical position of the Winawer, arising after 5.a3 Bxc3+ 6.bxc3: 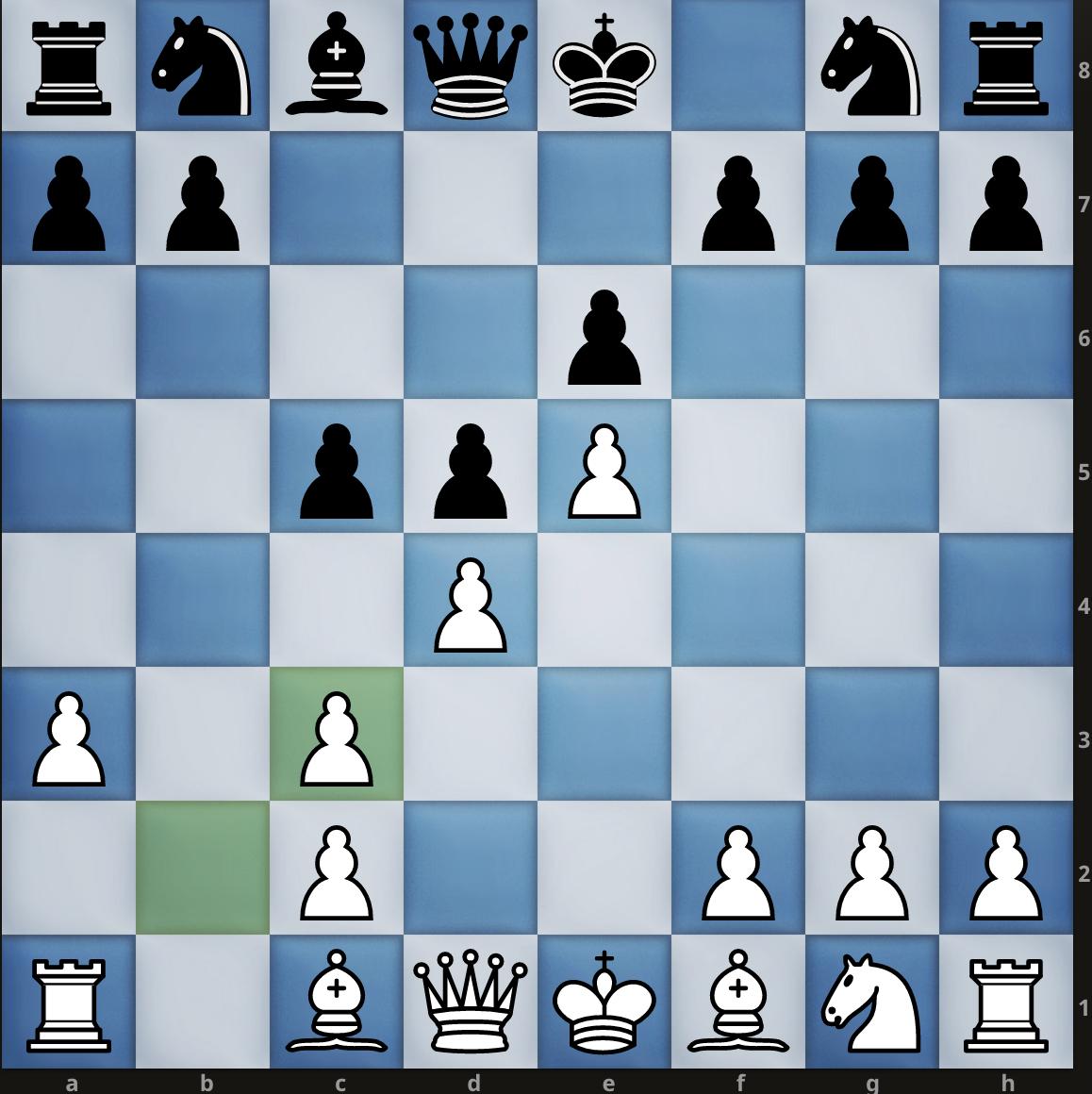 With that, let's have a look at some of these subtleties you need to be definitely aware of when playing the Winawer. To understand their necessity, we must first develop a feel for where white's best attacking chances lie. Consider again the following typical structure, but this time after black's best move 6th move, 6...Ne7: 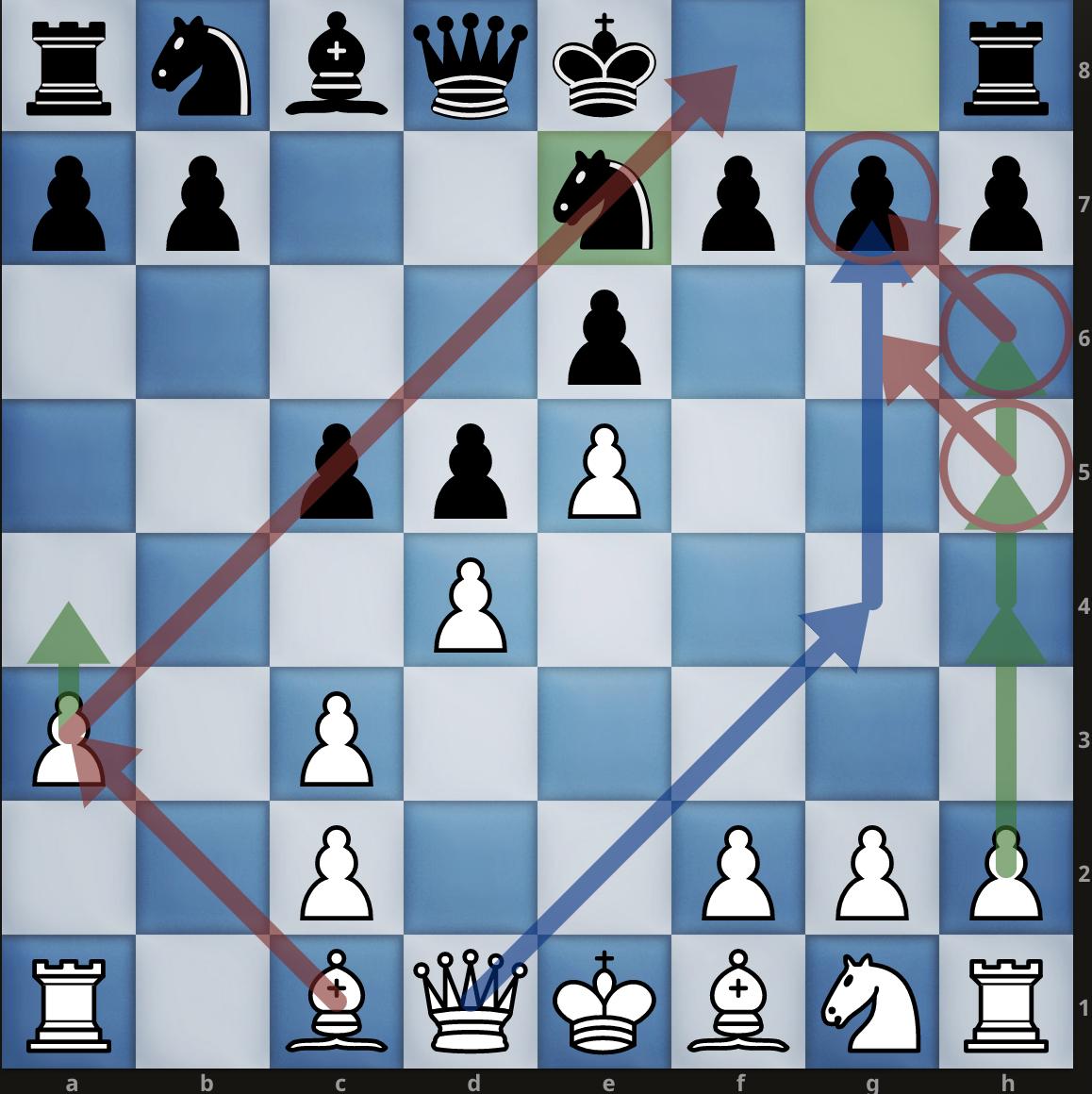 To prevent an early 7.a4, black has the option to play 6...Qa5 (instead of 6...Ne7) with tempo as c3 is attacked, with the idea to block next the a-pawn with Qa4! Indeed this looks dubious at first as the queen is being used as a blockader, but in fact on top of the blockade, the black queen is also well-established for creating counter-attacks on the queenside and in the center. 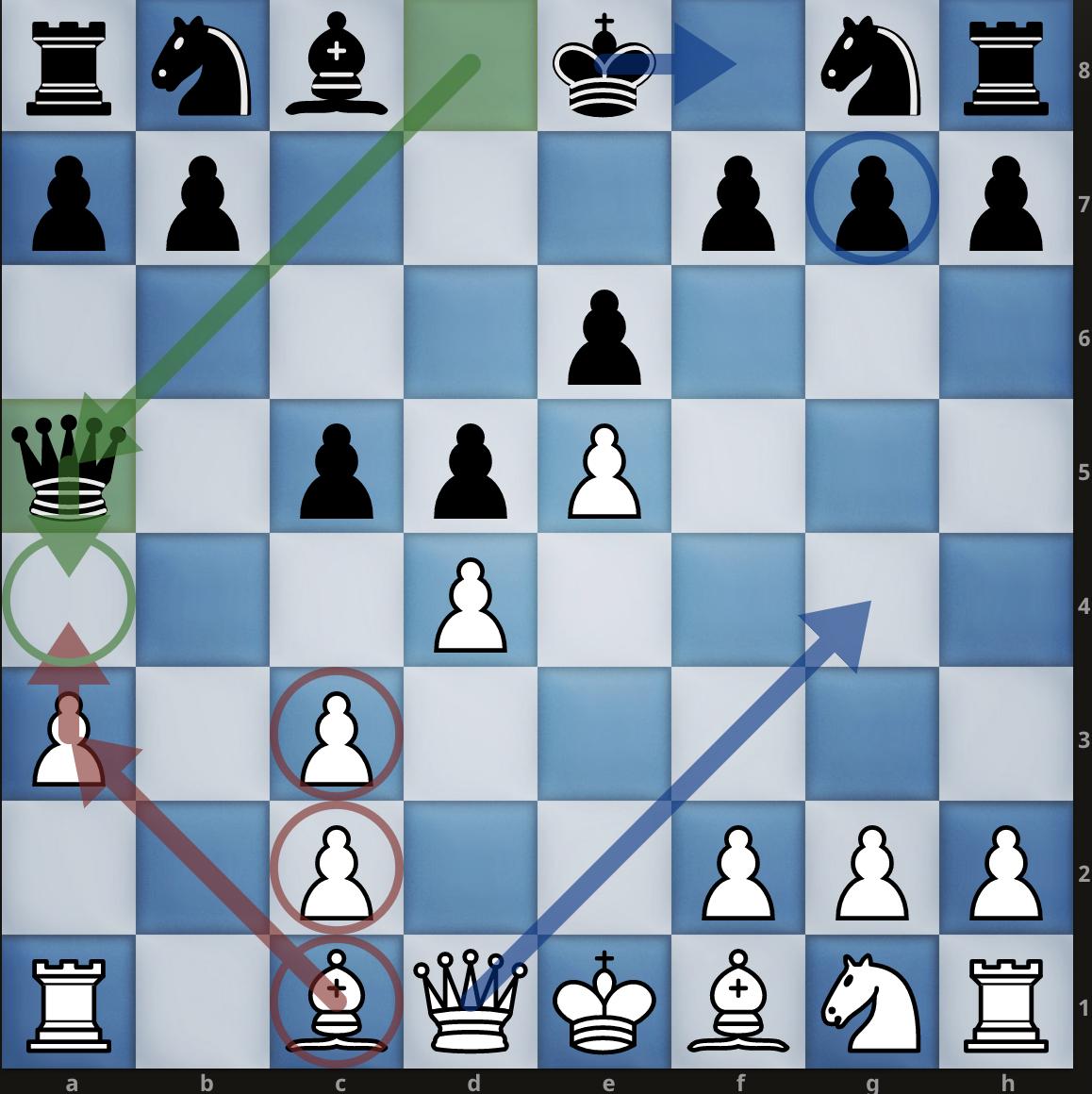 After 6...Ne7, in reply to white's 7.Qg4, as opposed to the more risky lines with 7...O-O, black has the option of playing the Poisoned Pawn variation, which after 7...Nbc6 entails: Sacrificing the g7 pawn for a quicker development, queenside castling, and dynamic play: 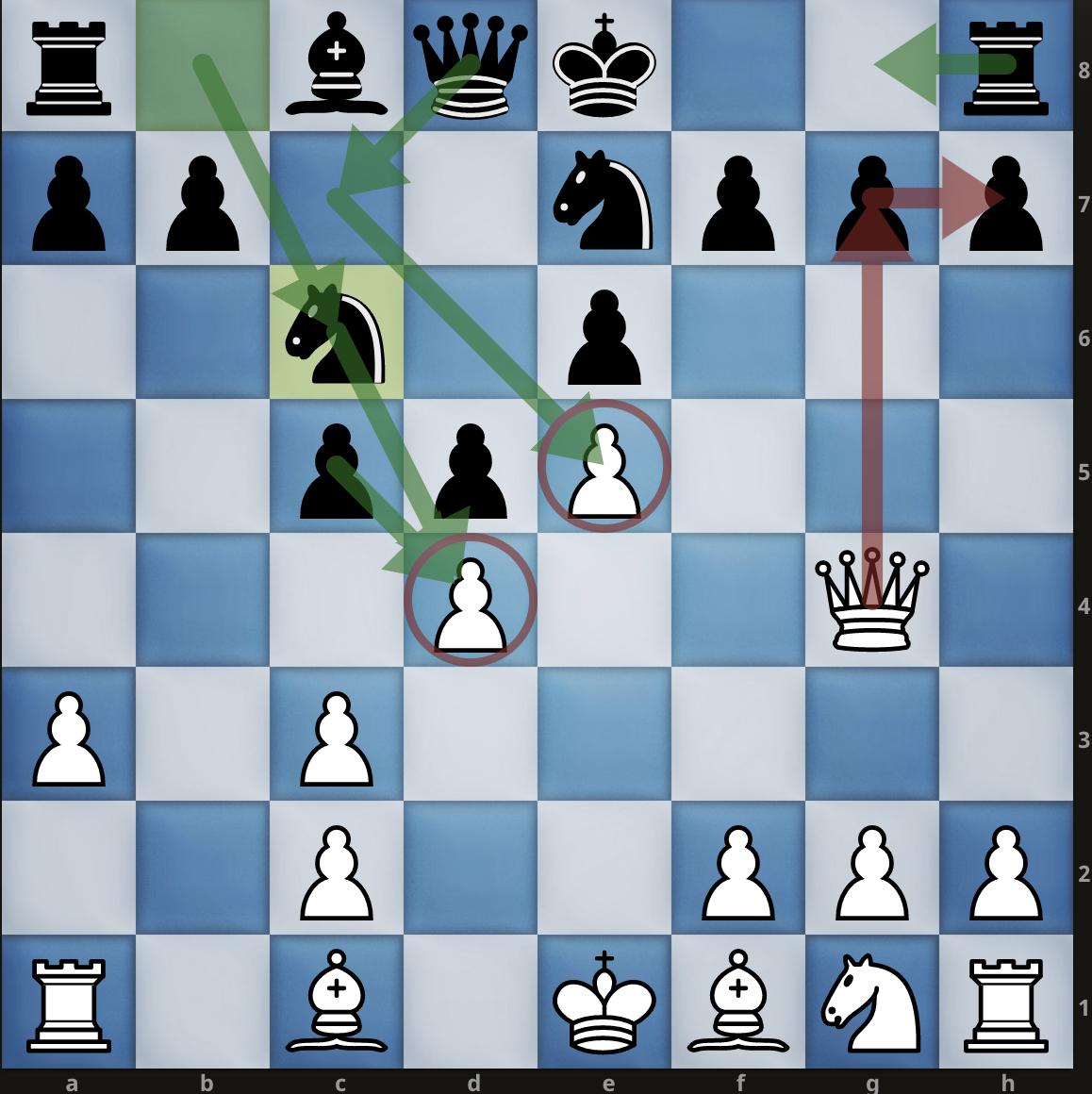 A typical continuation is:

The Petrosian variation starting from 4...Qd7 (instead of 4...c5) looks really dubious at first since: we're developing our queen by blocking our own bishop, and even before having developped our minor pieces. But in fact, Qd7 is a really useful multi-purpose move: it prevents Bb5+ and prepared to trade the light-square bishops with b6-Ba6 and it indirectly defends the g7 pawn against Qg4. Since with the queen on d7, Qg4 can be replied with f5, a discovered defense if you will :) 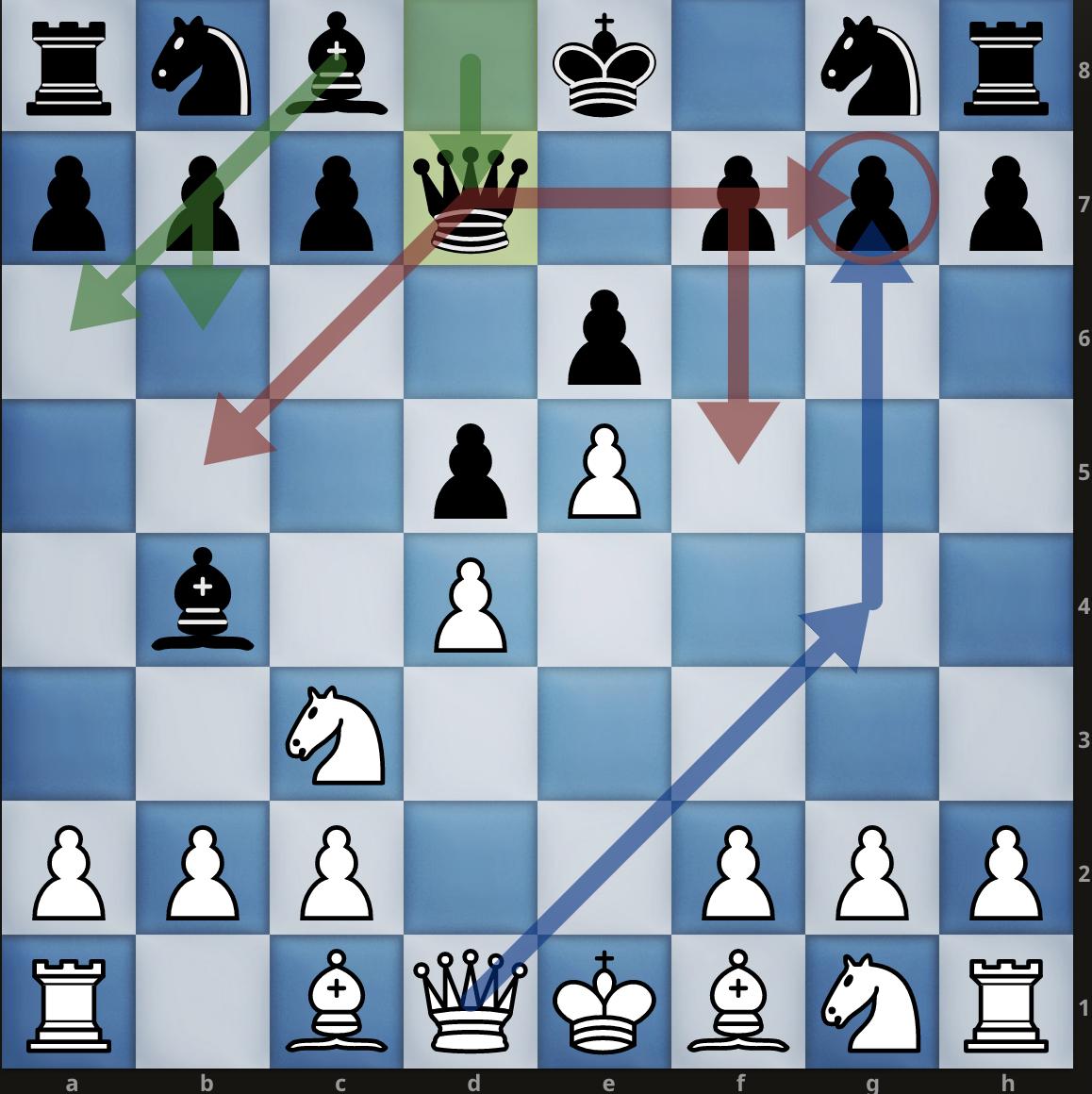 And the list goes on... But you see the pattern behind these subtleties: they are all backed by highly concrete ideas and thus, far from a mere application of opening principles. These are things you need to take into account if you really want to adopt playing the Winawer, these systems are not everyone's cup of tea.

Again, this was simply a rough overview, attempting to bring to your attention the kinds of positions and manoeuvres you need to get yourself accustomed to if you want to start playing the Winawer. Let's finish by summarising mostly black's trumps in the Winawer:

I was not sure that I could answer this question because there are so many non-standard types of positions in the Winawer, and it covers entire books. I am primarily going to discuss the famous main line, and what its basic ideas are for both sides.

The main line is where white plays an early Qg4, and attacks the black kingside. The main ideas for both sides in their simplest forms are that white is trying to take on g7 and h7, and eventually queen the h-pawn...simplistic, but accurate, but nevertheless, a long way from fruition.

In the meantime, black is playing to rip apart the center with c5, cxd4/dxc3, castle long, and take on e5, sometimes via a sacrifice (with the queen on c7 and after f4 by white) to attack the white king, which is usually stranded in the center. After this potential sacrifice, there may also be tactical ideas against the wayward white queen trapping it. If black can open the center successfully, and make the center pawns count by advancing them, and using the center to open lines to the white king, the white king will not be safe and often perish. Obviously, this general plan is VERY tactical, and requires a lot of book knowledge, and calculation during the game once you have left book. This main line is so sharp (even the description sounds sharp) that there are not a lot more generalities that I can add since they are very specific to the positions that arise.

The problem is what happens when white, and this happens a lot at lower levels, decides not to play into that mainline scheme because of being afraid of theory? There is too much here, and goes beyond the scope of one SE question. That leaves a lot of different possibilities from not playing either e5 (Anti-Winawer with cxd5, Bd3, or even Qd3 among others) or a3 (Semi-Winawer with Bd2 primarily) at all, to exchanging on d5, which bring up radically different plans. White can also play positionally with Nf4 and a4.

Instead of 4...c5, you can also opt for 4...Ne7, which aims for a more closed game, and to avoid the sharpest lines, but I tend to think that black does well playing the main line.

As I looked at my library, and looked up books specifically on the Winawer, I found two books that I would recommend.

I do not own this book, but based on the Amazon "Look Inside" feature, it is one of the most impressive opening books I have ever seen in terms of spelling out the ideas, especially in a complicated opening:

The second book, "Winning With the French", and I do own this one, is by GM Wolfgang Uhlmann, who was probably THE authority on the French during his peak years, and never played anything but the French in response to 1.e4 during his career (or so they say). The book is exclusively taken from 60 of his games, and the explanations are very good, but watching how a master of this opening handles it will be invaluable.

Lastly, I also suggest studying the games of Viktor Kortchnoi, another noted expert on the French.

Not the answer you're looking for? Browse other questions tagged opening strategy french-defense winawer-variation or ask your own question.