It is my understanding that a castling move cannot occur if the king / rook moved. However, in the case where a rook and king move but end up in their original spots, can a castling move occur?

Sorry, no. Once either has moved, it can no longer be involved in castling. An unmoved king, and the other unmoved rook can still castle.

The answer is NO. Neither the King nor the Rook on the side you want to castle should not had moved previously AND there is one important fact, the Rooks should be on the initial position rank!

There were some lacks in rules of castling in chess history and some people made fun of this by creating funny joke puzzles like this one: 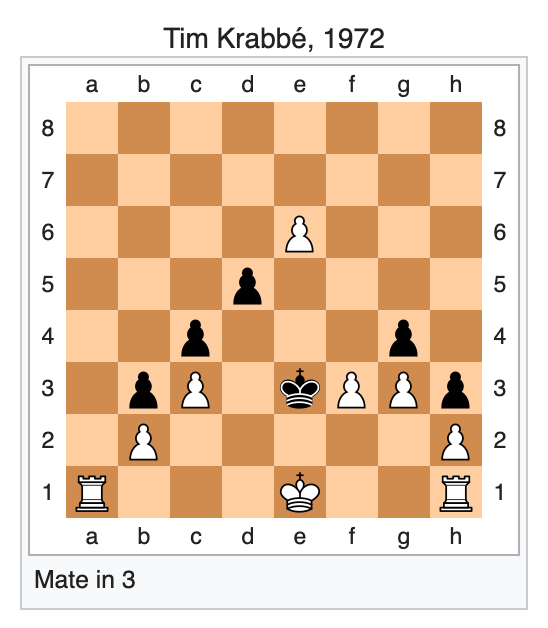 An example was composed by Tim Krabbé and relied on a loophole that existed in the definition of castling. In the diagram, White must mate in three moves. The solution begins 1. e7, then the main variations are:

In the last variation, White castles with his newly promoted rook, moving his king to e3 and the rook to e2. Under the rules of chess at the time, this move was arguably legal because the rook had not moved yet. Afterward, FIDE amended the rules to require that the castling rook must occupy the same rank as the king

Not the answer you're looking for? Browse other questions tagged rules castling or ask your own question.

78
When is castling possible?

13
Draws, castling rights, and the FIDE's 2014 rulebook revision
3
Can a rook put an opponent's king in check as a result of castling?
3
Castling, is it necessary to take it?
3
chess24 castling rules
7
Official rules for castling in Chess960? (Is there a loophole?)
3
What effects would being able to capture while castling have?
3
Castling Rules-Does “The king & rook must be on the same rank.”=“Only original rooks can do castling.”?
7
Does a loophole still exist in the defintion of castling?