How to play against higher rated (much stronger) players

I am about to play a master. This is an important game, and I want to win it. What should I do and how to prepare? Is there something special I can do, such as special openings, sharp lines, etc.?

Unless you have gotten much stronger than your 1542 FIDE rating, you have to realize that your odds of winning are not very good. It is fine to be realistic, but just do not let that overwhelm your emotions.

You want to keep calm, and do not be afraid. I would not be afraid at all if I were playing Magnus Carlsen. Oh sure, I know what the result is likely to be as I am not crazy, but there is no point in having any fear, and I would just try to play the best chess I can.

It helps if you are white, but if possible, I would aim for a position where I can reasonably gambit a pawn, or two, for a wild tactical position. If you play a quiet position where your master opponent's stronger positional skill is not challenged, you are destined to lose. On the other hand, even low-level masters can make tactical errors, and over look something.

If you have a lot of time to prepare for him, like in a one-game-per-week tournament, go over every game of his you can get your hands on with a computer. It is not likely, but you might find some opening move that he has played that is a hidden blunder, and if so, you could aim for that position again.

Although rare, lightening does strike. Here is a game that I still recal reading during my first year of playing. This is from the 1980 U.S. Open, and a 1621 player, W Stanley Davis, beat GM John Fedorowicz, who was rated 2479 at the time, so good luck. Please note that it was an aggressive, tactical game.

This is from the December 1980 issue of Chess Life, and I took it from the free archives the USCF now puts out online. 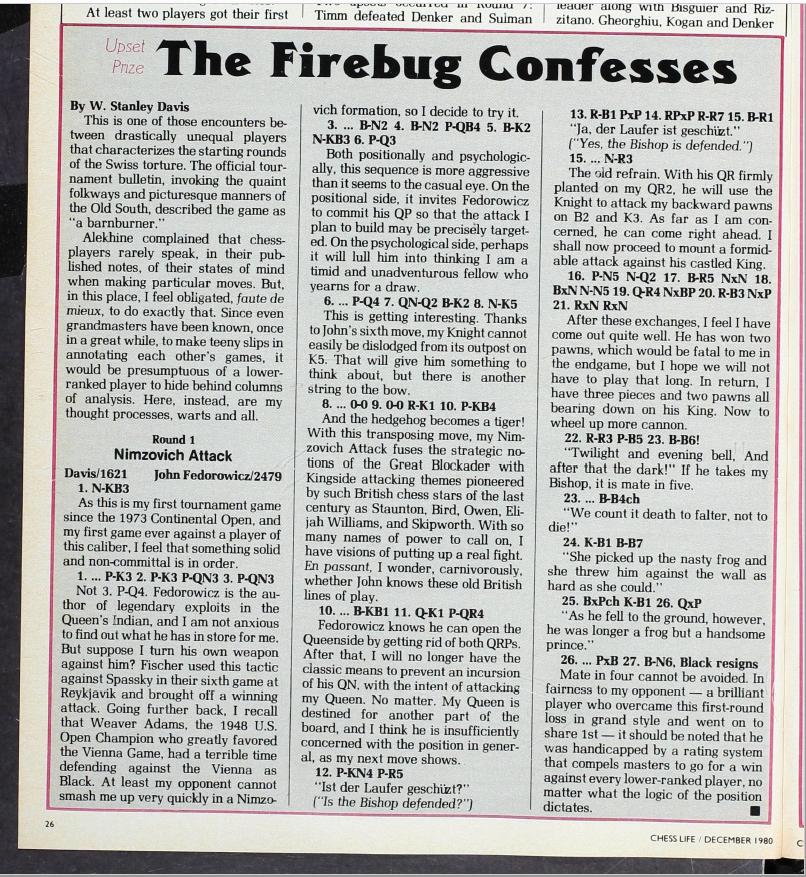 Objectively speaking there is nothing special you can do.

Just do the regular preparation:

If the opponent is much much stronger, don't expect too much. You are not going to do wonders by just a preparation.

If you like to gamble, you could prepare a non-standard side-line opening which might surprise your opponent and if you are lucky, you might get an advantage. Still that's risky as typically those openings are somewhat unsound if your opponent knows what they are doing.

In his book "Chess for Tigers", Simon Webb says that the best thing to do is to drag the elephant into the swamp. In other words, aim for complications, where the stronger player has a chance to make a mistake.

In a similar vein, a local player wrote an article about his rise in rating, and his advice was to make the stronger player beat you.

Both of these methods have worked for me to upset stronger players.

Exactly how you'd play any other game. Adjusting from the strongest elements of your game (that is: the ones that you play normally) will only make you play worse than your rating, reducing your chances of winning.

It depends how good you are.
Are you a near master? Are you much weaker? If the player is much stronger you need to play for the draw and make him take chances which cause him to lose.

If you know the master and he always uses certain openings then for sure brush up on those and what defenses/attacks you might use.

If you know what his style is then you can try for openings that deny him his natural advantage.

If you know his personality you might be able to find a way to throw him off his game with things off the board.

Get a good nights sleep. Do not worry about the game.
Relax and play your best to maximise your chances.

There is no guarantee that you will beat anybody. Just play your best and play solid not taking stupid chances. Go into the game being willing to take a draw.
But IF the opportunity arises then be willing to go for the win.

Fischer played to win every game from the first move. For more ordinary players that style is way too risky. Especially if you are playing someone much better than you.

That said, since they are much stronger than you, you should expect to lose.

Play aggressively and in positions you're comfortable with. They expect you to play passively and those are easy wins for them.

In most situations you would steer towards tactics over position. Tactical ability peaks fairly young while positional knowledge tends to grow over time. A master is most likely going to be past his tactical peak and relying more on his positional play. It would be almost unheard of for a player like you to beat a master positionally but it's always possible they could make a tactical mistake.

If you have examples of their games you can prep lines using an engine. However, you should make sure you know what you're doing. Don't play a line just because an engine or book says it's good.

Not the answer you're looking for? Browse other questions tagged tournament preparation or ask your own question.

19
What is the best strategy for an amateur to last as many moves as possible against a GM?
2
Adapt play style when playing against stronger / weaker opponents?