I have heard many people saying, “Hah! I beat Stockfish,” and one saying, “I am the best chess player ever! I beat Stockfish.” So I wonder if it is possible, just to know whether I should try to beat it. I tried to play it once; I barely played 25 moves.

The answer is that they either played it on some very handicapped mode, they took back A LOT of moves, or they are probably lying.

Stockfish 11 is currently rated about 3607, and that is in standard chess. Computer programs are typically even HARDER to beat for humans at even faster controls.

There is a reason elite humans have not played matches against computers for a long time: even the Carlsens of the world cannot beat them any more. According to the ELO winning expectancy calculator, there is currently a 745 point difference between Stockfish 11 and Carlsen, and per the chart, that gives the computer a 99.5439696% chance of winning.

Note: The ratings used above are from different rating pools, and thus, are not truly directly comparable, but used as a rough estimate of what would happen between the computer and Carlsen.

It's absolutely beatable, but not by an unassisted human. Anyone who claims to have done so is either lying or stacked the deck super heavily in their favor (e.g., by having Stockfish search only to depth 2). "Slow computer" isn't good enough - Stockfish 11 running on 1999 hardware would still have handily beaten Kasparov. You will need help from another engine to win.

If these people insist they can still beat Stockfish 11 unaided, challenge them to prove it live. You can probably offer them odds of pawn and move and they'll still lose (they won't even draw). If they actually manage to win, it'll be big news. Here's an example of a claimed win from 2011, at a time when computers were already unbeatable by humans. As ChessBase put it, "Believe it or not? Not, of course. Definitely not." Pointedly, the guy making the claim was later convicted of fraud.

People who say they beat Stockfish did it at a low level, with a fast time control so Stockfish could not do its best, and perhaps also on slower computers.

Can Stockfish be beat at high level on fast computer with long time control? Of course, but it would likely take another computer program to do it.

Remember that Stockfish was rated at 3388 as of July 2017 and would be even stronger now.

I would say it is practically unbeatable by a human player when running according to the TCEC hardware, but theoretically, it could be since chess has so many possibilities that we only completely understand it when only 7 pieces are on the board(Endgame Tablebases). Another fact is that these tablebases were created by supercomputers. I am certainly sure that it could be beaten by non-human players especially Neural Networks.

Gary Kasparov said this when Stockfish was only rated around 3100:

“There has been a steady, but slow, drive upwards. But the strongest chess [software] engines today -Stockfish, Komodo– are in the 3100-plus category, so much stronger that competition even with Magnus Carlsen would make no sense. Not because they understand chess, but because they make almost no mistakes,”

I played against Sockfish 5 2000. I had won the game, I was chasing the king down with three connected pawns, and my king. Driving him back until I forced Stockfish into a stalemate. But until the last move made, I was 1 second ahead of the computers time. I hadn't played the game seriously since the 70's. Seen Lichess, Gave it a go. I actually didn't know at the time Stockfish was a computer, I thought Man this guy is really fast, and good too! Can't let him think he can run over me. Ha, Ha, how funny! Game wasn't a fluke, won another game at 2000 rating, and beat computers time by 3 seconds.

Well i usually play with stockfish on my mobile to sharpen my chess skills. I am now good at chess playing. My opening (as far as I think) is one of the best in the world. I never played officaly against any grandmaster but informally i have played against a state level champion (Bihar, India) i beat him easily in both the games (on a train journey). I tried several time to do something better against stockfish (10 and 11). In some of my best games against stockfish, I managed to pull the game upto 60 moves (but never won or made a draw). In my analysis, I was equally balanced upto 30 moves and then I made blunder (I was not able to guess the opponents move). So i can say it's not possible to beat stockfish 9 and above by any human now. I regularly watches international chess games specially Vishwanathan Anand's game, and many times i realized he made bad moves (some times blunders too). After his match when I analyzed, I found my guess better than him. Yet i cannot claim myself a master or grandmaster. My best chess rank on lichess was 2400+, after that I stopped playing on that. I usually play online anonymously. I am not serious anytime, so I make blunders. My normal chess rating lies between 1500-2500.

Upd. Considering this question I did exercise of mating maxed out Chess.Com engine. During analysis it turned out that most like they are using some version of Stockfish or Komodo. It required a one restart of whole process, tries of different positions, sacrifices and total destruction on strategical level. It only understood that it has problems only when the position was already totally losing. It required nearly 60 moves, my guess it is not possible to do it in less amount of moves. I reduced required number of moves because I used moves from other engines, which were not critical for the win. Professional player can do the same without using chess engine and with less trials. The hardest part is to find key ideas against key weaknesses, essentially it is task for human not computer. Also you must find the good opening which would work. It is important that I do not know what engine I beat because essentially the required steps to make your own win would be the same nonetheless. 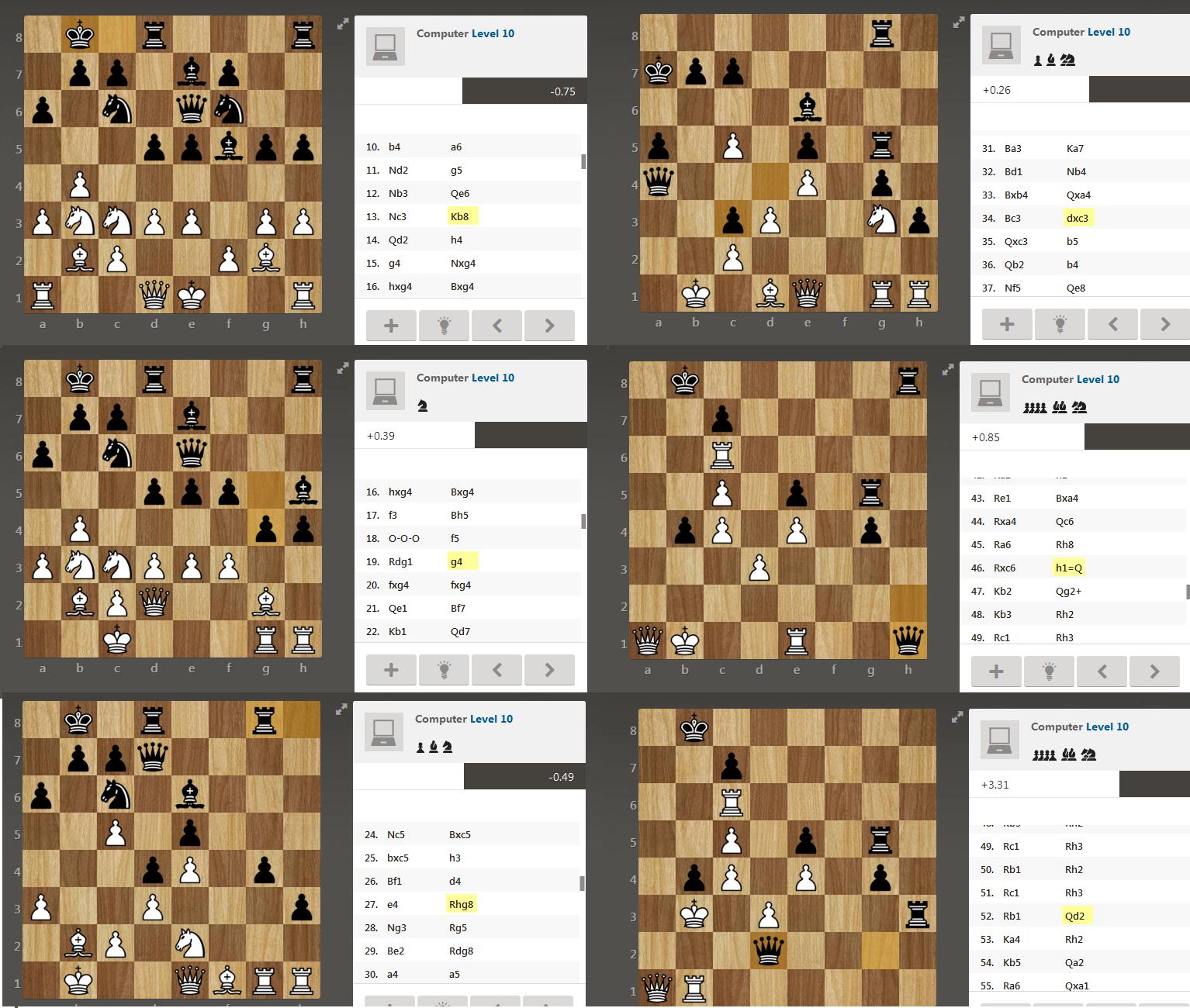 Just note that game had 3 turnouts. I outtraded engine for a whole piece. Then I sack that bishop I had an advantage to get a grab on Queen which engine was thinking is OK because he was lured into a trap with overestimating his passed pawn. Engine really overestimated his ability to make checks and material advantage. Engines are so greedy that if you play by luring their risky attacks into clear trap they have zero brain to avoid it. And after you win once - you win forever. May be tweak some moves but you would repeat the whole idea.

Stockfish and other computer engines are beatable, considering these factors:

Attacking this weaknesses makes a lot of fun and creates different anti-computer strategies.

I would say, that we should define true computer engine, which would inherit these properties:

True computer engines are beatable by humans, given there are competitive circumstances. Real game with stakes in money + time for human side for preparation at least few months + true computer engine which would be standing with sportsmanship. Beatable.

Latest versions of Stockfish and Lc0 from beginning are not fair true computer engines, because they apply neural networks which were trained by supervision techniques - or by humans, or by other engines. So it's kind of a database which is built into engine to speed it up. So I don't think that "beating" such opponent would even count as "beating computer" because you are in fact beating other people who were training that specific neural nets.

PS. I did it. I started with observing how other engines deal with computer opponents and came up with moves which would counter the ideas which this particular engine were developing. Is there a guide to try to pull this off by yourself?

PPS. It's a game and computers are dumb at games! Just imagine you have bots against you in CSGO. Sure they can shoot, and their shooting could be improved up to milliseconds so no human player would be stronger at shooting. But there is more in CSGO then just pointing your mouse at specified directions.

Gary Kasparov has beaten Deep Blue several times. Carlsen and Kasparov haven’t played against Stockfish yet, as far as I know, so we can't comment on this issue. But in my opinion, world champions will he able to beat the best of the best computers for next 20 years or so. This is because, as we can easily see in TCEC games, no chess engine is unbeatable. If every single game they play against each other ends in a draw, then we can conclude that we have reached the stage of fool-proof chess engines.

Not the answer you're looking for? Browse other questions tagged engines stockfish computer-chess or ask your own question.

2
What was one shortcoming of alpha zero that Kasparov noted?

3
New chess variant (opinion required)
3
How to go about beating chess engines?
3
How to send uci messages from c# app to stockfish on android?
32
Understanding AlphaZero
3
What is the Elo rating of Stockfish version that played AlphaZero?
22
Creating chess engine, machine learning vs. traditional engine?
2
Why doesn't Stockfish (DroidFish) try to flag me?
21
Why is Leela so good at beating Stockfish in the French/Slav?
5
Could a top ranked GM draw against Stockfish using drawish opening lines in classical chess?
2
How should I configure Stockfish if I want it to play as a 2800 ELO player without the UCI_LimitStrength value?