One of the most interesting openings, in my opinion, is the Kings Indian Defense (KID). 2-4 decades ago it used to be very popular at the top level with Bobby Fischer and Garry Kasparov using it regularly. Even a few years ago it used to be quite popular with Radjabov and Nakamura having it in their repertoires.

Why has it started to go out of fashion at the elite level, and especially with the Neural Network engines on the rise? Leela has been able to use it quite effectively. Nakamura said in an interview that the Kings Indian is lost for black. What are the drawbacks of the openings that prevent it from being seen at the top level?

It is simply not as solid as other openings, mostly because it cedes too much space, and especially with the advent of computers: White has simply found more ways to press black.

In a 2017 interview, Magnus Carlsen did not think too highly of it. "If he had wanted a worse position, he would have played the King’s Indian," Carlsen said.

Nevertheless, it still gets played at the highest level from time to time, probably mostly as a surprise weapon. Here is a recent search of Mega 2020 (I previously searched incorrectly, and have edited this). This is from 2015-2020, sorted by rating first, and then date. You can see that despite the quote above, even Carlsen has played it. 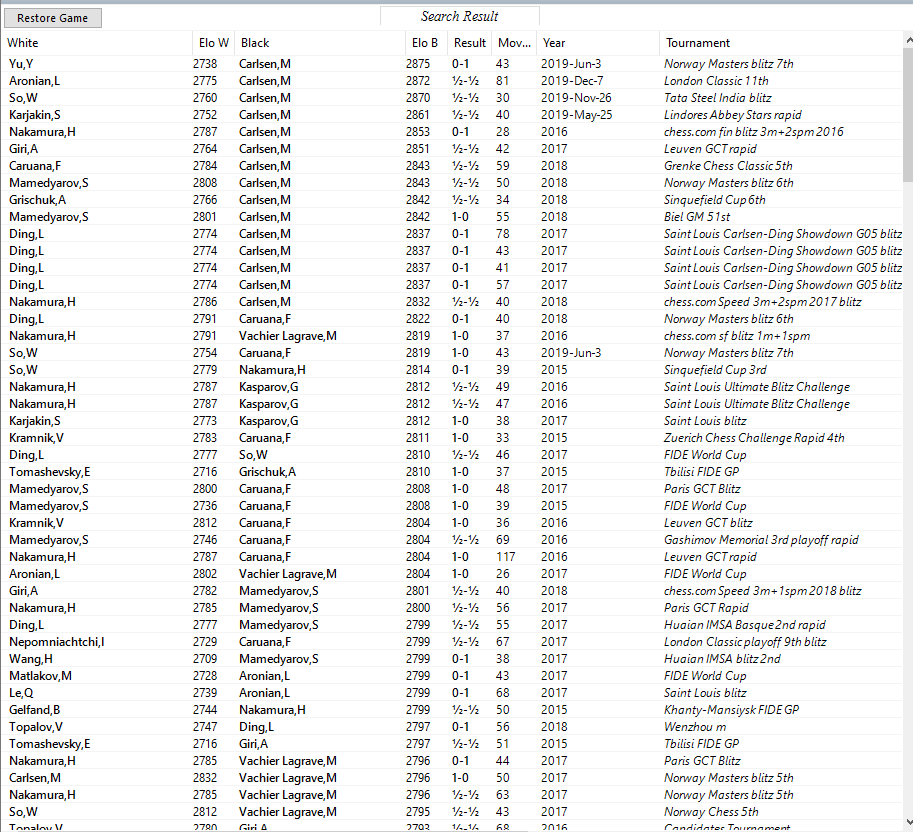 Nakamura is known to run at the mouth. KID is certainly not losing.

Chess in general at the top level is more solid; Berlin's instead of Sicilians. It is just a trend.

Notice how Carlsen wasn't dominating with double-king-pawn as Black, but when he prepared the Sveshnikov his score soared. People thought they could go after his Sicilian... It's the same with the King's Indian. Radjabov is the top KID proponent and he does very well, but at the top they don't want to play 35 moves of book. They are more about minute edges in the endgame and that is not in the spirit of the KID.

Having said that, there is ton's of theory which make it not fun for Black. The Bayonet attack doesn't let Black try to mate White while White wins on the Queen-side in a bunch of other mainlines.

UPDATE: Firouzja is playing the KID right now in the Prague Chess Festival; would a 2700 player play it if he thought it was losing?

I need to make a correction to the original post, and then I will provide an answer!

The question-asker claimed that Hikaru said that the King's Indian lost for black. This is actually not true! If you click on the link provided, you'll find that Hikaru states that Garry Kasparov decided that the King's Indian loses for black. And when Hikaru stated that, he did not intend to say that that was his opinion. Rather, he was answering the question from the interviewer who wondered if Garry had shared secrets to Hikaru that Hikaru was holding back. Hikaru responded by saying that he wasn't holding back secrets passed on by Garry, since Garry had decided it was losing. That was his point.

Now, obviously, with the tone in which Hikaru said this (and Hikaru's other comments), it was obvious that Hikaru was starting to sour on the opening a bit himself. But the King's Indian is a risky opening that is difficult to play well at the highest level -- and Hikaru probably had gotten burned by it recently.

However, that interview was from a long time ago.

Hikaru is well known (as are all chess players and all human beings) for taking different tones and attitudes toward something that backfires on them.

This by no means signifies that he is done with the King's Indian.

In fact, Garry Kasparov and Judit Polgar had turned away from the King's Indian, but Hikaru himself and Radjabov revived it.

At that point in time in 2015, the King's Indian may have been having troubles again -- but that doesn't mean that it won't be revived again.

The difficulty is that computers keep advancing and making it tough to play incredibly sharp lines without a clear outcome.

Players are always unsure whether or not their opponent has some tricky line prepared after hours of computer analysis. As such, they tend to like slightly safer lines.

But the real answer to your question is simply that openings go in and out of favor. Generally, when one really good player has success with an opening, it causes the other players to look into it more -- and it might even spark new ideas in their minds.

It's like a conversation. I might say something that causes you to go "Oh, wow, that's a great idea. And if that's true, then isn't such and such true?"

Right now, nobody in the top level are sparking those sorts of ideas in the King's Indian.

So, the King's Indian "conversation," has died off a bit.

That doesn't mean it won't be revived in the future!

(and regarding Magnus' remark, Magnus has his opinions... and he was also being witty!)

While the KID is a good opening if you want an exciting game and good winning chances as black, these benefits come at a cost. The KID is not a solid opening when compared to many other ways for black to meet queenside pawn openings from white, and there is a wide variety of tricky lines that white can choose from to try for a serious advantage out of the opening.

Some of these setups by white are very sharp, forcing black to know a huge amount of concrete lines by heart not to immediately fall into a lost position (I'm thinking mainly of the various ways to play the Mar del Plata variation for white, including - but not limited to - Kramnik's dreaded bayonet attack)

Other setups are more strategic in nature, trying to utilize the space advantage that black hands over in the beginning of the game. In this list, we include the Sämisch, the Petrosian, and the Makogonov systems (not to mention the various fianchetto systems that white can try, which is another can of worms that black has to deal with). All of these systems pose serious strategic problems for the black side, and black needs not only a solid understanding of the arising position, but must also know a ton of spectacular "only moves" to defend properly (see the game between Svidler and Griscuk from the candidates 2013; if Grischuk hadn't played the seemingly outrageous 12...Nxc4! he would have found himself in deep, deep trouble).

If you want a good indication of how much effort and time a top level player would need to put in to play the KID consistently with confidence, you may want to look at the book series "Kotronias on the King's Indian". In this series, Kotronias needs more than 2000 pages of concrete analysis to demonstrate that there is no clear refutation to the KID.

With all this being said, the KID is certainly not a bad opening (a claim supported by the analysis done by Kotronias). But the problem with playing it at the highest level is that black is risking a lot when playing it, and would be risking even more by including it in their main repertoire (leaving themselves open to some seriously nasty preps by their world-class opponents; this is something that MVL does by only playing his absolute pet Najdorf and Grünfeld against basically anything, and sometimes he suffers for it). Therefore, most players at the top level who are comfortable playing the KID only use it as a surprise weapon (or if they're playing shorter time controls), or if they're in a must-win situation where the difference between a draw and a loss is irrelevant.

164
What are examples of very aggressive openings?
6
Why don't I have more success with the King's Indian Attack?
3
Why is the Scheveningen Sicilian almost never seen nowadays at top-level chess?
8
In the Giuoco Piano, why is 4.0-0 currently so popular at top level?
5
Why don't we play different openings in chess?
6
Popularity of the Scotch Game
4
Why don't masters play 7...e5 against the Fianchetto Variation of the King's Indian?
1
Does opening preparation contribute a lot in winning games?