I am currently studying the Tarrasch Defense 1.d4 d5 2.c4 e6 3.Nc3 c5, and naturally I've stumbled upon many Kasparov games as he frequentloy and quite successfully employed this opening throughout his career. In particular, in the game Yasser Seirawan vs Garry Kasparov (1983), a remarkable endgame position transpires:

Kasparov wins this game, but his technique goes very quickly beyond me and I'm struggling to understand the maneuvers that followed, particularly, black starts retreating towards the 7th rank and then returns to c5, and only then advances the b pawn after white has to make a move away from the its current d3 square. My questions:

My attempt with this question is to learn more about how to reason about such endgame and to understand how Kasparov composed this (to me counterintuitive) plan.

In this game Kasparov is showing a perfect demonstration of the triangulation technique in order to Zugzwang the white king.

To be in a Zugzwang means, any move loses or more generally, worsens your position, and one cannot simply pass the turn and maintain the position.

In the diagrammed position, the key idea to spot is that white would be in Zugzwang if it was their turn to move. Let's see how by playing the position assuming it's white's turn again after 47.f5:

Having spotted the winning idea when it's white to move, next comes the question of how to achieve this Zugzwang position? Essentially, black needs to find a way to pass the turn, that is, intentionally lose a tempo in order to have the same position but it being white's turn. This is called the triangulation technique.

Triangulation in Kings and pawns endgame:

In the diagrammed position below, black has the opposition as it is white to move. One sign that triangulation might be possible to achieve is to realise that one king has fewer squares than the other one. Here, black has only 2 squares d7,c6 in order to stop the advance of the c pawn and shoulder the white king simultaneously, while its counterpart, the white king, has 3 squares d5,e5,d4. So to pass the turn, the triangulation goes as: 1.Ke5 Kc6 2.Kd4 Kd7 3.Kd5 and mission accomplished: white has the opposition now as it is black to move. The resulting opposition is winning as black is in Zugzwang: all 4 legal moves Ke7, Ke8, Kd8, Kc8 are losing (convince yourself as an exercise). 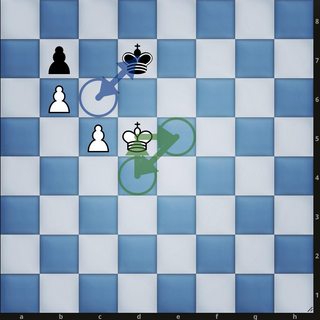 Similar to our previous example: black has to achieve the same position but with white to move, so we need to waste a tempo and pass the turn. This immediately calls for a triangulation scheme! Its feasibility here lies again in the fact that white's king has fewer squares than black's. See the diagram below: 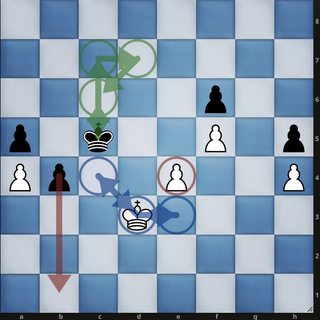 Therefore, white only has the c4,e3 squares, i.e. fewer squares than black's king, which means the basic requirement for a successful triangulation is met, and we should be able to reach the desired position with white to move!

What a beautiful endgame! Don't be discouraged by the difficulty of these endgames, nor misled by the simplified depiction of the triangulation scheme above. Endgames, in particular kings & pawn ones, are known to be notoriously concrete and counterintuitive. Moreover, judging whether a successful triangulation is possible, is often far from being a simple matter. For example, in the above we constantly had to make sure all the other lines for white were indeed losing and that white's best bet lied in dancing along c4-d3-e3, and only then it made sense to compare which king has fewer squares! There's no singular-universally valid rule of thumb that tells us whether a triangulation leading to putting the opponent's king in Zugzwang exists or not. There are only signs, which need to be carefully considered.

The execution of these techniques, and the conversion of such endgames can never be achieved intuitively, one mis-step and all our advantage and efforts are out the window. For instance, in the game as you showed in your diagram, 8...Ka3 is in fact the only move that wins! To improve, focus on expanding your knowledge of endgame techniques (opposition, triangulation, Philidor/Lucena positions, etc), and in practical play, in order to recognise whether a combination exists, like in the Kasparov game, the mindset generally is:

This is a stunning endgame. It is impressive how Kasparov perfectly used reserve tempi to reach the winning position in the diagram where triangulation is all that remains after Seirawan's 40. e4?? which was the last move of time-control. After this Seirawan is lost.

Seirawan annotates this game in his book full of stories "Chess Duels : My Games with the World Champions."

Not the answer you're looking for? Browse other questions tagged endgame pawn-endgame planning kasparov zugzwang or ask your own question.

18
Is there an easy way to detect a draw in a King + Pawn vs King endgame?
9
Can someone explain how this pawn endgame works?
4
Analysis of Pawn Endgame from Amateur to IM
1
How would you evaluate this king and pawn endgame for white, and what's the best book to study King and pawn endgames?
2
How come this king and knight + rook pawn vs king endgame not drawn?
4
Why is this King and Pawn ending lost for White?
5
Book recommendations on Pawn Endgame for intermediate and advanced level players?
2
How to mathematically determine if king and pawn versus king endgame is a draw or a win?
5
In a KP-K endgame, if the enemy king is in front of the pawn, is it always a draw?
3
When can king and pawn win against another king and pawn?