What is a "monster knight"?

I was watching an agadmator video explaining a game between two chess engines, and at one point in the video after a knight move, agadmator talks about how that knight then became "basically a monster knight", and therefore must be taken. He then talks more about some other games involving "monster knights", but never really explains what he means by "monster knight".

My common sense is telling me that a "monster knight" is simply a knight that is well positioned, but from the way that agadmator talked about the concept, it seemed to me like there is a more precise definition of what makes a "monster knight". I googled around for a definition and didn't find it anywhere, hence why I am asking it here.

So, what's a "monster knight"?

The concept of a knight which is so powerfully placed (generally on e6/e3) that the game wins itself dates, according to Winter, from:

An observation by Zukertort after 26 Ne6 in the simultaneous game Steinitz v Maas, London, 5 November 1873:

‘The appearance of the knight at K6 [e6 for white, e3 for black] is generally, for the opponent, the proper signal to strike his colours.’ Source: City of London Chess Magazine, May 1874, pages 97-98

Here is the game extract:

When the game Steinitz v von Bardeleben, Hastings, 1895 was shown in a ‘Chess Movies’ article on page 336 of the November 1949 Chess Review, the following comment referred to 19 Ne6:

‘A knight at K6 is like a bone in the throat, says Steinitz.’

From page 212 of the first volume of Kasparov’s Predecessors series, before 16 Ne6 in Lasker v Capablanca, St Petersburg, 1914:

Consider black's e4 knight in this following position. If black moves the knight, white will experience a discovered check from the light-squared bishop. Is that scary? It's frightening! For instance, a move like 1.Qh3 can be met with Nf2+, double attacking the king and the queen.

How many squares is such a knight attacking? Well, there's the 8 squares that a centralized knight can move to in one jump: 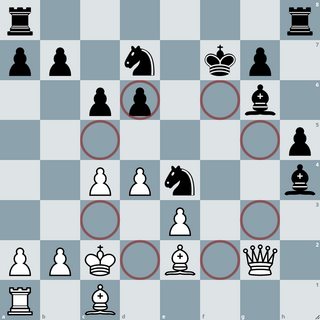 But because of the discovered check, the knight effectively attacks all squares that it can move to within two jumps: 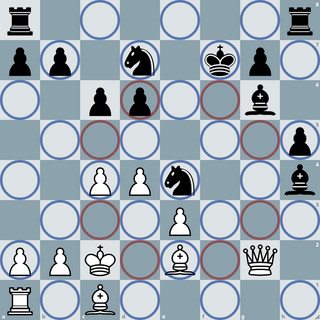 That's 35 squares. That's more than half the board. In fact, taking away the knight changes the computer evaluation by 13 points. (After moving the white king out of check.) That's more than a measly 9 point queen!

If the white queen were to rest on any of these squares, then black could convert this tactical advantage into a material one and capture that queen!

There is no standard nor official definition. Normal folks would take it to be a VERY well placed and powerful knight.

I have sacked a rook for a knight and gotten huge advantages, but that depends on the specific position. Sometimes that knight can maneuver to where rooks and bishops have problems and can be the balance of power for a mating attack with the queen alone or with another piece.

In the video’s position the you linked, the knight is on a strong square and supported by two pawns. However it can be easily taken, so it is not as strong as if it were there and could remain.

It is not technically a pure chess term, but is not an uncommon description for a very powerful knight. It is simply English, and your common sense thoughts were right on the money.

It is just a description for a knight that is beautifully positioned, and that controls a lot of key territory on the board, and is often, but not always, unassailable. Sometimes, you can trade it off, but at a cost.

Lastly, and this is important, it must control enough of the board to make life difficult for the other side. Sometimes, you can have an optically beautiful piece (not just a knight), but it attacks nothing important, so it is not really a strong piece. I have seen knights on d5 in certain positions that while optically great, they did not combine with any other pieces actually threaten black.

Check out this position, from Anatoly Karpov vs. Garry Kasparov (1985) after 20...Rc8. Does that knight on d3 look like a monster to you? It's practically single-handedly paralyzing White's position.

I don't know if there is any standard definition for 'Monster knight' in chess world, But as someone who has seen tons of Agadmator chess videos I can say with confidence that what he means by a monster knight.

Not the answer you're looking for? Browse other questions tagged positional-play knights or ask your own question.

18
Opening with knight
17
"A knight on a rim is dim", but a knight on a corner is ... excellent?
4
Longest path for knight
7
Shortest path for a knight
5
Explaining knight move to kids
3
How to play better with Knight?
6
Is checkmate possible in knight vs knight pawnless endgame?
1
Can this knight move level the game?
11
Good Knight Against Bad Bishop Endgame - A More Constructive Plan?
3
Non-Standard Knight Development