THE longest problem ever (much longer than the mere 549 mover…)

The "Fireside Book of Chess" by I. Chernev and F. Reinfeld includes the following diagram

Composed by J.N. Babson for Brentano's Chess Monthly in 1882. Mate on the 1220th move, after compelling Black to make three successive and complete Knight's tours.

(Note that there is a mate in one. The problem asks for something more specific.)

So here are my questions:

history problems
Share
Improve this question
edited May 1 at 23:44

After some searching, it turns out that this monster is very much a real chess problem. The official name for it is "The Obelisk."

The earliest known reference I have found is from February of 1882, mere weeks after its publication. Bizarrely, it comes from an Australian magazine. The site I found it on is trove.nla.gov.au.

It appears in the 1882, February 25th edition of the South Australian Weekly Chronicle, published in Adelaide, on page 25. It is part of an overall review of Brentano's January 1882 issue.

Here is a clipping of the relevant section to read for yourself. 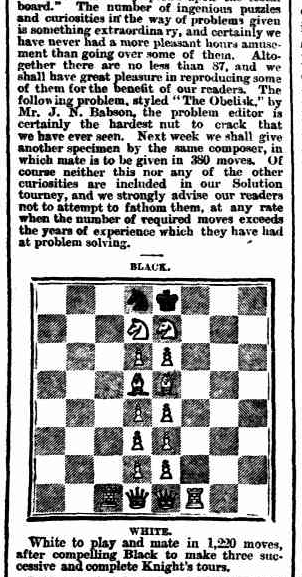 I also found mention of it in the "American Chess Review, Volume 1, Issues 1-6l"readable on Google books. It is dated to 1886, four years later.

The information is given in the middle of the page. The position itself is given near the end of the page in descriptive notation. More abut what that is on Wikipedia. For your information, the "S" is the German notation for the knight; it was semi-standard back then. 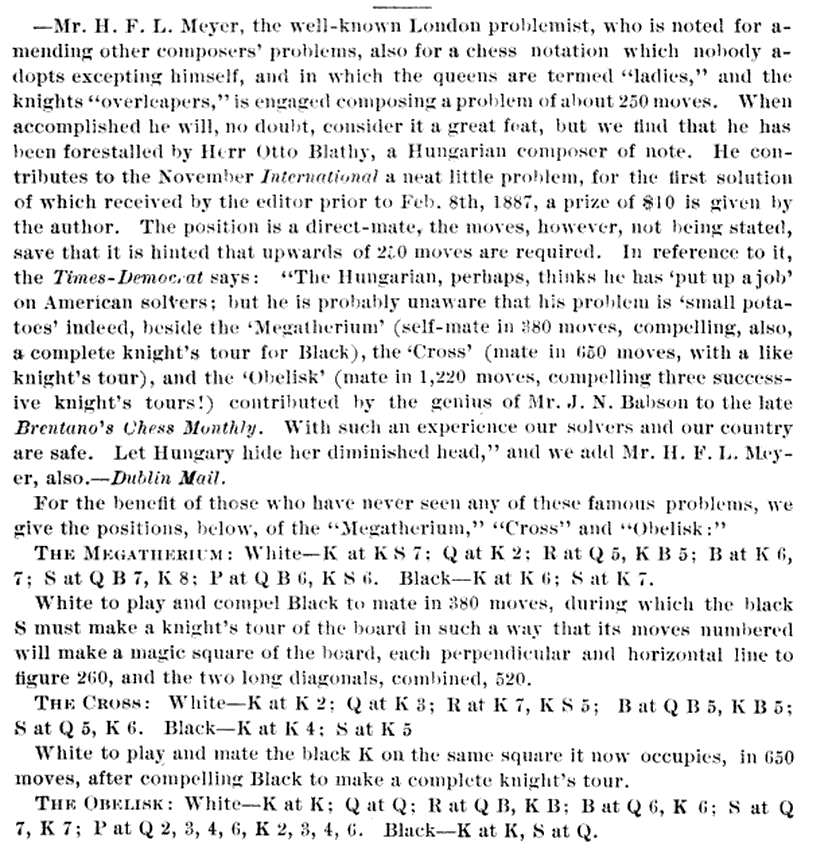 Wonders and Curiosities of Chess, page 205, by Irving Chernev, 1974

Unsurprisingly, there is no solution given anywhere at all. The reason for this is that the magazine ceased publication soon after the mate in 1220 was printed. Thus, another edition with the solution was never made.

As for how to interpret the stipulation, I believe it is very simple. White forces the Black knight to visit each and every square three times. Then White gives checkmates. Most of the moves come from White's pieces dancing around in order to do said forcing. If anyone is crazy enough to try and solve it, they will surely find a much shorter solution than whatever Otto Blathy had in mind.

To force the knight into a corner a piece must be sacrificed. 3 knight tours, 4 corners per tour, so that's 12 White pieces that must be lost. And none of the lost pieces can be knights (from where did it get there to give check?).

Looking at the position and the phrasing of the question, I would have to say that the problem is flawed. The directions are far too restrictive - how can white compel black to make three knight tours? If this was defined as a helpmate that's solvable in 1220 moves, then the problem would make more sense. However, even in this case, I cannot fathom how that would be possible as the number of moves that a three knight tours sum to is far less than 1220.

Not the answer you're looking for? Browse other questions tagged history problems or ask your own question.

27
What is the status for seven man end game table bases?