Although I have known the rules of chess since I was little, I only actually started playing it in May or June 2019, so about 6 or 7 months ago. When I started I had a Lichess classical rating of around 1100 (at my lowest I got to 1000!). With some peaks and bad moments, I did manage to increase my rating quite consistently over the months, and I have recently gotten to 1900. This was very satisfactory for me, since I really studied hours per day and worked very hard in order to improve.

Nevertheless, I find that I can't really move on now! I got stuck on 1900. This happened to me before at a 1500 rating; at that point, after being stuck for weeks, I studied Nimzowitsch's "My System", which was what allowed me to break the 1600 rating mark and continue to improve. I wonder if there is perhaps a book, a practice routine or something that could help me, like Nimzowitsch did when I was stuck in 1500, to 'step up' and break the 2000 rating mark.

I do know that what I most need to improve is my endgame (and I'm working on it and improving little by little). Does anybody experienced something like this? If so, what books, routines or approaches to the game helped to break the curse?

"PhishMaster's Complete Guide To Improvement": What to study, and how.

Every player has times where they "plateau", and have trouble moving on, but they usually get past it eventually if they are continuing to study. Sometimes, it is a matter of patience.

Here is a set of comprehensive answers to questions I previously gave in various chunks, that are now combined, and will include how to break 2000.

First, this outline is more for the average player, who still may be very decent, but is not likely to be become a professional.

Beginners up to 1800, it is mostly about tactics: Tactics, tactics, and more tactics. I have found that even players, who are 2100, are not as strong at tactics as they think they are. I also found that having a very strong dose of endgames, even when I got my first rating of 1036 USCF back in 1980, has stuck with me all the way through being a Master. I still love Fine's "Basic Chess Endings" (any mistakes in it as far overshadowed by the principles that it puts forth).

For tactics, I actually recommend starting with Reinfeld's "1001 Brilliant Ways to Checkmate", and then "1001 Winning Chess Sacrifices and Combinations". I firmly believe in good groupings of themes in the beginning, rather than sites that totally randomize your study. I also firmly believe in immersion, in other words, doing a lot in a short period of time. It just sticks better as far as I am concerned.

I recommend doing 50 per day, spending no more than two minutes per move on each problem. In pencil, write down next to the problem how easy you found it on a scale of 1-5 because you will do these books multiple times. That immersion method has worked very well for me. I took a friend, who was about 38 at the time, from 1000 to 1850 on ICC in three months following this method.

Around 1800, people start getting more clued in on positional play, and start picking up more on that. I still love Ludek Pachman's trilogy: "Complete Chess Strategy". That was the first time I started to see real plans enter into my games, and I still credit that trilogy with making me a Master. For the first time, I started to really grasp pawn play.

Also, around 1800, I also think that players need to understand HOW to play opening pawn structures instead of focusing on memorizing openings that when their opponent deviates, they are lost and on their own. For this, books like Soltis' "Pawn Structure Chess" (a really bad book if you are looking at it with a computer, but the underlying principles are very strong), and Mauricio Flores Ríos' book "Chess Structures: A Grandmaster Guide" is a fantastic book that expounds upon what was in the Soltis book, and does it a lot better, but also at a higher level.

Starting at 2000, assuming you have a shot at 2200 and higher, you are going to start needing specific openings, and memorization as you face stronger competition. All along, you should have been still studying more and more endgame material as you will also need that when you face "monsters".

Over 2200, you are talking about in-depth refinement of what you have learned. A lot of people buy the Dvoretsky books before they are ready, and now is the time that you are just getting started to be ready for those. They will help with small details, and a lot of it above 2200 is analyzing better and better, so not only will his books refined and expand your knowledge, they are hand-picked difficult problems that need a lot of deep analysis.

Here is a list of areas of study, and what to read while doing them.

You will note that unlike the backpack of a typical 1200-player, there is not a single opening book listed here. That is because you are learning HOW to play chess, rather than memorizing lines that you get to the end of, and have no idea why you are there, or why it is good or bad. Most of your opponents, until you get to 2200, won’t know much about book, and you will both be on your own early on, so the one, who understands what you should be trying for, and who does not lose his pieces (tactics), will win the game most of the time.

In general, read the above list in order within any category, but you should have the visualization, tactics, endgame, and pawn structures categories all going at one time. As you start to really understand the structures more, then add in the last, “positional chess” category.

Beside the other great and detailed answer, I want to add something that is not directly an advice(answer) to the question but to explain the situation. As one might already know, Lichess ratings are overrated by around 100-200 points compared to chesscom or FIDE ratings, because players start at 1500. But this thing gets complicated in Lichess classical ratings, here is the reason:

Lichess classical is not very popular, especially among high rated players. As a result, the distribution gets narrower. For example the top classical player today is 2632 rated. Moreover, the distribution almost ends at around 2500 (and reaches 100% cumulative at 2300): 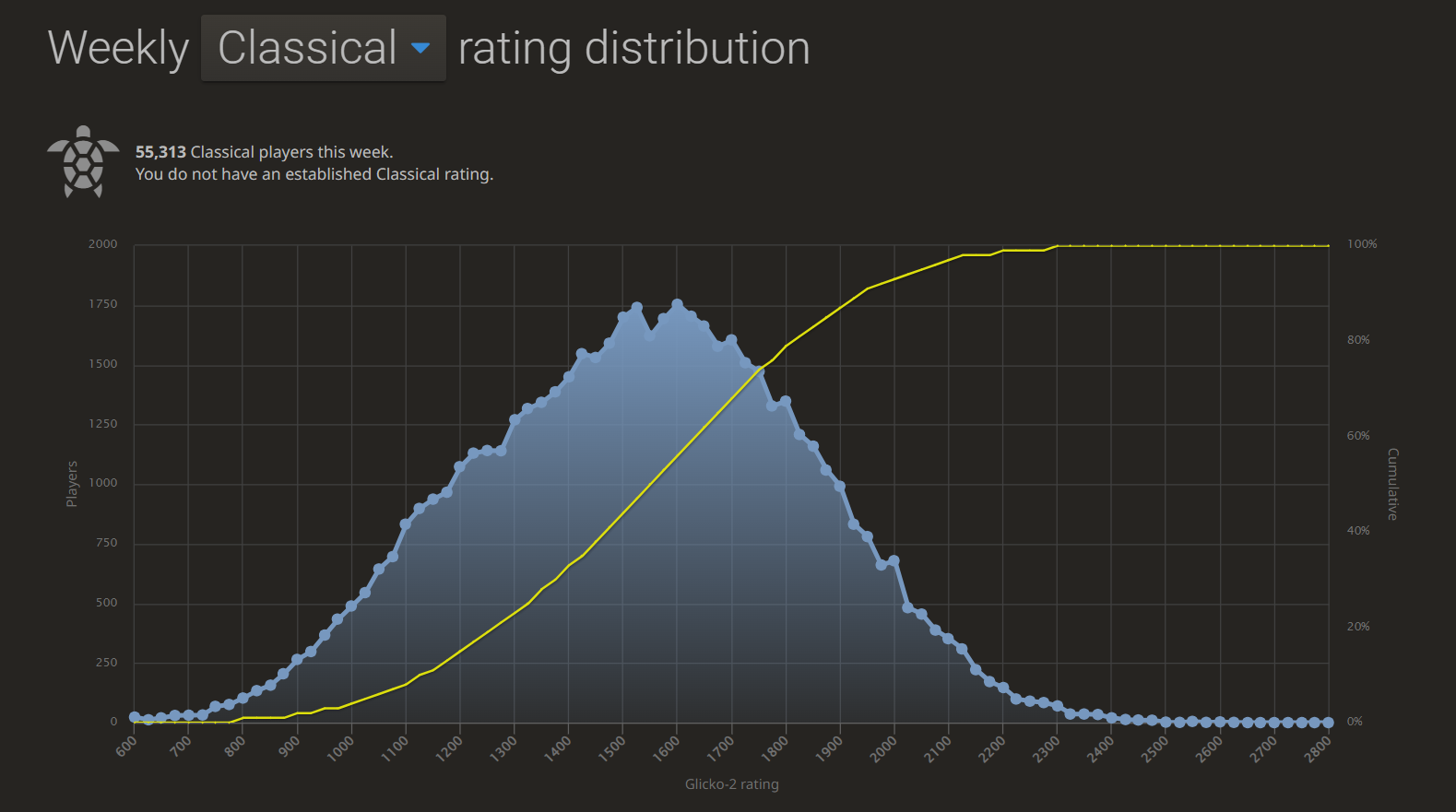 To conclude my point, although a player still has 100-200 extra rating in the middle of the distribution, that player will not have that overratedness towards the end of the distribution (higher ratings) as a result of the aforementioned unpopularity. So although you improve, that might not reflect that much on your classical Lichess rating. Don't lose the hope :)

Extra hypothetical case: Imagine Magnus Carlsen playing classical Lichess. He would probably only be able to reach around 2650-2700 rating because there wouldn't be enough opponent to gain rating from, where he would be underrated around 100-200 points compared to his FIDE rating.

Just playing more games is the best advice to break the 2k glicko rating barrier for normal chess on lichess. It is not that hard!

Not the answer you're looking for? Browse other questions tagged learning rating lichess or ask your own question.

10
How to be a better tournament player?
9
How to create a good practice routine?
3
About how to win a pawn by applying pressure-Looking for examples
8
How do you play the King's Indian Attack aggressively?
4
Puzzle rush vs. Puzzles
3
Game analysis - Understanding the potential of this queenside expansion
-1
Going from a winning position to losing one

35
Most effective way to achieve a 2000+ rating in one year, starting as a 1600?
5
Illegal swiss pairings?
10
How to get to 2000 ELO rating
6
Consistently playing moves below my potential
1
Establish Rating System for My Community
5
Can one improve his chess without playing online?
4
Is my improvement decent, and if so how can I keep it up?
2
Is tactics training just a waste of time when you cannot play long games?