Understanding Anand's Bc4 move vs Ivanchuk 1992

In the Ivanchuk vs Anand game (1992), the game leads into an endgame after lots of exchanges, which by no means looks (to me at least) winning for black: they both have 2 rooks, 2 bishops, and black has a rather awkward pawn structure in the center with the doubled f-pawns and the light square holes. Nonetheless, Anand decided to trade his bishop by playing Bc4 (shown in diagram below), and managed to win the game afterwards quite convincingly and rather seamlessly!

In short, the key idea is to prevent white from playing h2-h3!

Bc4 forces the exchange of light square bishops, and thus, sets up Rh3 which blocks the h2 pawn and keeps both the h2 and g4 pawns weak. Concretely, the only piece currently covering h3 is the light squared bishop on f1, so by trading the bishop with Bc4, which white cannot prevent as Bg2 leaves h2 hanging, white has no immediate means (e.g. a rook on g3 would prepare h3 but it's too slow) of preventing black's imminent Rh3. 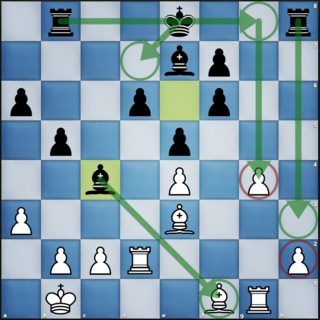 More precisely, the plan is: 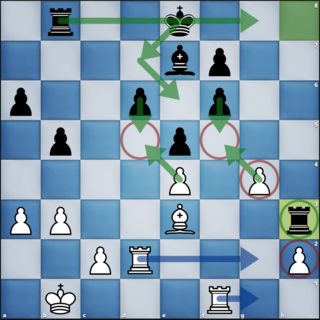 Suppose Bc4 is not played, then white gets to play h3, and thus maintaining their bind on light squares and killing black's prospect of creating two connected passers. In the game itself, Ivanchuck decided to trade the g-pawn quickly (by advancing it to g5) in order to get rid of one of his weak pawns, after which Anand still managed to execute his plan as all he had to ensure was trading the e4 pawn by playing d5. Here's the position that transpired in the actual game, where Anand's plan has been executed to perfection: 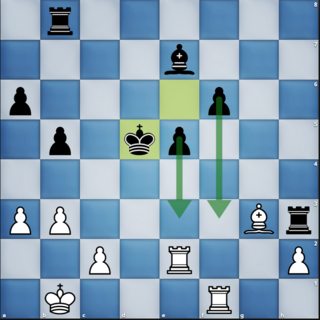 Quite an exemplary game showing Anand's deep positional understanding: note the move Bc4 a priori undermines a couple of chess principles: it willingly trades black's only good bishop, after which black is left with a hemmed-in dark squared bishop vs white's active one. Moreover, black allows their queenside pawns to become shattered into 2 (isolated) islands, and in doing so having less chance of dominating1 2-vs-3 on the queenside.

In spite of all these at-first-glance-unfavourable aspects of the move, Anand beautifully realised controlling the h3 square outweighs them all, since preventing white's h2-h3 pawn advance to support g4 is the only way black can maintain the prospect of active play in the pawn skeleton that had transpired, as we discussed above.

Here's the game itself:

1: Domination in this context means: the side with the minority (less pawns) achieving a setup (e.g. a blockade) where neither of the majority pawns of the opponent can (easily) advance. Typical to the Sicilian pawn structure on the queenside, one such setup could be white's pawns being on a2-b3-c2 and black's pawns pinning down on dark squares with a5-b4. For an example see the setup by Caruana (as black) in his candidates game vs Karjakin (e.g. around move 22), where indeed one of his positional mistakes in that game was to give up the domination with 26...a4.

Phonon's answer is great, and I might not otherwise try to add anything, but I thought that adding Anand's own words might be worthy. In particular, of note, is that his "bad" Be7 holds his position together while his rooks go to work. This is not uncommon in Sicilian lines with d6 and e5 (and f6), and worth remembering if you play similar lines.

So, here are Anand's own words about 20...Bc4!! (his own exclams): "In time to stop white getting some sort of fortress in the kingside. Black's `bad' bishop will protect his pawns while he exchanges towards connected h and g passers."

I wonder if he meant e and f passers, but he also, clearly, envisioned that e and f would be come strong, and he only gave one up before they started to roll because it forced the win of the exchange.

Not the answer you're looking for? Browse other questions tagged endgame positional-play anand or ask your own question.

8
Can Black save this Knight vs Bishop endgame with a pawn down?
7
Fischer vs. Geller, Curacao Candidates 1962
5
How to improve positional chess understanding?
17
How is Kasparov vs Shirov 1992 a victory?
7
When to move/centralize king?
14
How to improve on the early endgame?
4
What are the merits of Anand's exchange sacrifice in game 9 of 1995 World Chess Championship?
15
The difficulty of finding the winning idea in this knight versus bishop endgame
13
Knight vs bishop endgame in Fabiano Caruana vs Hou Yifan 2018
4
Positional chess understanding in the early game