Why have engines not increased top rated chess players' Elo?

The arrival of strong chess engines as Stockfish, Houdini or Rybka allow top players to deeply prepare lines in openings or to study better endgames.

I would expect a rating increase of top players. However, Kasparov's top score from 1999 is still the second best rating score of all time and Karpov and Fischer are still in the top twenty historical rated players. 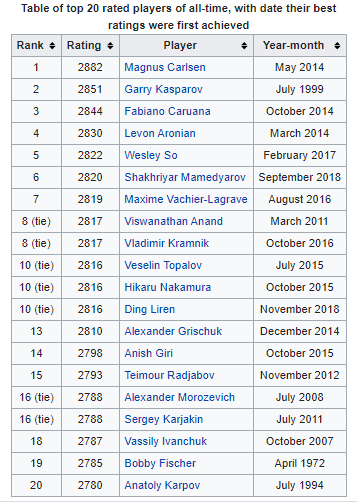 I think they certainly have increased their ELO, but more importantly, their overall chess strength. ELO is only a rating relative to others in the pool so it may tend to go up more slowly if everyone in the pool gets better, which they have collectively.

First, you need to take an average of the top players, rather than look at just two incredibly special players, Kasparov, and Carlsen, and their peak ratings. Fischer was a total anomaly for his time, and again, you cannot base a lot on one person. Humans probably have a limit mentally much the way runners will eventually hit a speed wall that they cannot break. It is the Bell Curve in action: Easy to make progress in the middle, but harder on the end.

I have been playing for a long time, and anyone, who knows my handle, has seen me watching relays of the top tournaments on ICC for more than 20 years, and I can say that it is not just inflation from having actually watched the level of play improve over the years. Players at the Master-level, including even normal Masters, are MUCH better now due to the tools available today than the tools available when I first became a Master.

When I first started playing, all we had was books, and a local club. Today, I can logon virtually any day, and play a GM. I was also a ranked tennis player as a teenager, and I can tell you from that experience, playing better competition makes you better, so being able to logon and play stronger players than ever has increased the overall level of play. In addition, we now have ChessBase, and a database of about 8.3M games that can be sorted efficiently and studied. We also have engines, as noted in the question, and they certainly have also added to our chess knowledge, and fundamentally changed how the top players prepare. Lastly, I mentioned books, and as an avid collector (I had 1800 at my peak), I can tell you that even the quality of the material in books is on another level since when I started.

I cannot tell you what proportion of all these advances have played toward X-number of rating points increase, but I can tell you that without a doubt, they all have lead to players at the top levels, and even down some, being much better overall.

The question is apparently based on a misunderstanding of how ELO ratings work. There is absolutely no mechanism by which the overall increase in players' strength would lead to increase in their ELO. The actual value of the ELO rating bears no meaning; nor does the comparison of ELO at distant times. The only thing that has direct relevance is the difference in simultaneous rating between players.

If tomorrow FIDE decided to add a constant, say, 500 points, to every player's rating, essentially nothing would change - the outcomes of games would lead to the same increments in ratings, so the rating dynamics would be the same, just at +500 points level. And the computers will provide no basepoint - their ELO is relative to human players, so they will play at 3600 rather than 3100.

The same applies if such a constant were somehow added or subtracted gradually due to natural processes - e. g., expansion of rated players' base, players becoming inactive with higher rating than they started with, etc. And this, apparently, did happen as we witnessed rating inflation until recently.

Similarly, if all the players suddenly, or gradually, start playing stronger, without a change of their relative strength, there is no reason to expect a change in rating dynamics.

No. The main effect of engines and also the internet has been to democratise chess. The top players have always had access to top level evaluation and knowledge. For lower level players that kind of knowledge, analysis, position evaluation, endgame knowledge was very difficult to acquire.

1) Ratings overall tend to rise due to inflation of more players entering the pool, rather than the average playing strength of players increasing. If everyone becomes better by some factor due to engines, why would top players' ratings increase? They're now playing opponents who have also gotten stronger by roughly the same amount.

2) Kasparov, Karpov, and Fischer are anomalies of a sort (Kasparov especially), considering they are all world champions. And still, they only occupy 3/20 spots on the list - all other ratings were achieved in the modern era.

3) Engines are making people stronger, but not to a huge extent. People aren't able to extract all the strength out of an engine, we just see the moves it recommends.

In summary, engines make people somewhat stronger, but in any case this wouldn't be reflected in the ratings. The pool of players is a closed system: everyone getting stronger doesn't benefit one player/group of players in particular. The way the ratings rise (at all levels) is from more people joining the system.

EDIT: one way you would see some increase purely due to engines is in a hypothetical scenario where we played against another group of people who didn't have access to our engines.

EDIT 2: Point 1 may not be entirely correct (see the discussion in the comments).

8
How accurate are chess engine ratings?

4
How can I compare top chess players that were not scored using Elo?
8
Why has Carlsen's Elo not changed?
1
For long OTB games, what is the percentage of players who have a rating which is below X FIDE Elo?
2
What would approximately be the ICCF rating of a GM with no external help and of a computer with no human judgment?
11
Are chess engines detrimental for lower-rated players?
3
Chess Engines and Elo Ratings
5
Do top chess grandmasters have significant drawing chances against top engines?
4
Creating program for finding top players with respect to elo and age
15
Why is Magnus Carlsen's Elo rating not higher, given that his win rate is so high?
3
Why are unrated players counted as rated players in this FIDE rated event?