What does it mean to play "positionally", and how do you train that?

I often hear this term thrown around when people are analyzing chess, but I don't really know what it means. I assume it's a generic term that means to play defensively, or to set up for the future. If that's what it means, how do I learn when it's time to do that, and how to do that? If the meaning is more precise than that, what is it?

There are three general types of players: Positional, tactical, and universal, which is being adept and comfortable in both positional and tactical games. Tactical means that you love open positions that require a lot of calculation, and often include all-out attacks.

I gave a very detailed list of positional elements in this post. Be aware that positional sense is one of the last things that a chess player develops, and it takes a lot of time to develop. Most players are pretty experienced by the time they really start to understand this well.

I think of game time decisions as yin-yang of tactics vs strategy (or positional play). In that order, tactics are the move-by-move calculations with the aim of achieving material gains (or preventing material losses if you are defending). Positional considerations are your intellectual efforts that do not involve precise calculations, but rather have the goal of achieving advantages that are expected to bring material gains long term. To summarize, the difference between the two is a concrete result vs an expected result.

As the term goes, it's about planning one's play according to the potentials of the position: which means, to name a few, taking note of the weak points, of the potential improvement of our pieces (e.g. establishing a permanent central post for a knight) and of the prospects the pawn skeleton offers. This allows us to compose a strategic plan that aims to achieve a positional edge (e.g. induce a weakness or secure a square for a piece).

As an example for a case of playing positionally according to the pawn structure, consider the exchange variation of the QGD, where a typical positional consideration would be to play for the minority attack as white in order to trade the minority queenside pawns for black's pawns and in the process induce a weakened pawn on c6 for black. See the diagram below which can occur after: 1.d4 d5 2.c4 e6 3.Nc3 Nf6 4.cxd5 exd5 5.Bg5 c6 6.Qc2 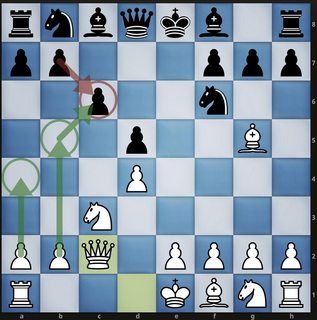 As a side-note that even the Qc2 move here by white is a positional move: it prevents black from establishing a good light square bishop with Bf5, that option ruled out, the c8 bishop really struggles to become useful in this structure.

Another example of playing positionally, pertaining to both establishing a strong central piece by considering the induced weakpoints in the established pawn structure, consider the following Sicilian Najdorf position where black has opted for the d6-e5 setup and therefore weakning their light squares, in particular the d5. So, by taking note of that, one of white's main plans in such positions is to exploit that weakness and establish a permanent knight on d5. See the diagram below sketching one such plan: 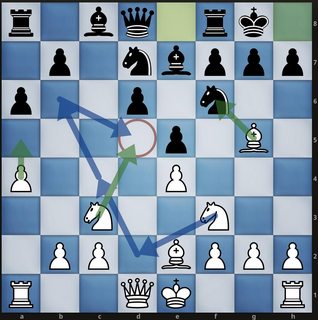 In short, to play positionally is to make stratetigc plans according to the potentials of the position in terms of pawn structure, piece effectiveness, king safety, etc. Though bear in mind positional and tactical play always go hand in hand as the latter is always needed to concretely execute the former.

As for ways to train your positional understanding: study games of professional players and try to understand their decision makings and what they aimed for (like the above examples), ask yourself a lot of questions in the openings you play and study (what are the moves trying to achieve at a basic level), and try to think of your own positions in terms of principles such as pawn structure, effective pieces, king safety and so on. In terms of examples of players whose games you could look into, Vladimir Kramnik, Mikhail Botvinnik, Emanuel Lasker, Alexandra Kosteniuk ,Yasser Seirawan, come to mind, but of course there are many others to consider.

For more examples of positional type of discussions, you might also find these posts helpful:

Positional play means to play for small advantages in the position rather than for material or a direct attack on the king.

There are a lot of books that go in-depth on the subject. I'll try to keep it simple though. A lot of positional play revolves around improving the mobility of one's own pieces while restricting the mobility of the opponent's. By doing that you increase the "power" of your pieces. There are other concepts as well such as pawn structure, weak squares etc. The basic idea though is to slowly build small advantages until your advantage over the opponent leads to a won game.

It doesn't really mean to play defensively. There are positional openings that build towards attacks. At higher levels, the lines between being a positional player and a tactical player become blurred. For example, you might put your knight in a strong outpost and then use that to create an attack. Really good players don't try to put things in boxes like that.

The three elements of chess were initially cosidered to be space (position), time (development) and force (material. Of these, material is generally considered to be the most important. But if you are about to be checkmated, it doesn't matter how many pieces you may be ahead by. Thus, a positonal or space advantage can be considered as having control of an important part of the board. Controlling the center for example will give you a positional advantage in the sense that you will have more freedom of movement to develop your pieces and manuever them into favorable positions. Such an advantage will facilitate your developing an attack against the enemy king. Controlling more space with a positional advantage will also tend to restrict your opponent's ability to mount a successful defense. And it's almost axiomatic that tactics tend to flow from a better position.

14
Positional thinking by Grandmasters
13
Caruana vs Carlsen game 10 (WCC) why not 18...Nxb6?
15
Understanding Kramnik's play in game 1 of Candidates 2018
5
Ways to notice opponent's threats during one's own move

23
What is a tabiya and what is their importance?
3
What does 6 and 2 going mean?
6
What should my plan be in this middlegame?
6
What does chess theory refer to?
0
What does "best five out of eight" mean?
17
What does it mean to call a line "sharp"?
5
What does "penned in" mean in Chess?
20
What is a "monster knight"?
7
When should I play f3/f6?
9
How do I play against the Queen's Gambit Declined Tartakower structure?