Analysis of a position in order to find the best move

I am trying to learn to play chess, but it is not an easy task. I am playing as much as possible and try to watch games an reading in order to learn. I am playng on Chess.com, and a lot of times I find myself in this position:

I am black, and it is my turn to move. The sequence of moves is the following: 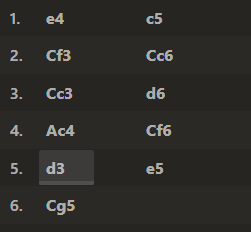 on the left there are the moves white did, and on the right there are my moves, so black's moves.

From this position my move was e5, but I am not sure it is a good move.

What is the best move in this position? And can I correct something in my sequence of moves so far? Thanks.

I am a beginner, so I have a lot to learn.

White's opening is not very ambitious when he does not play d4, so you would probably have an easier time getting in the "standard" Sicilian freeing move d5. When black gets that move in, he is usually equal, if not better. So instead of 5...e5??, 5...e6 was better helping to achieve that goal of d5.

In the final position, after 6.Bg5, Be7 looks best, but you already weakened d5 a lot, so in most cases, black will trade on f6, and sink a very powerful knight onto the d5 square.

As you are finding, learning how to play the game does not take long, but learning to play well can take a lifetime (depending on your goals).

Not the answer you're looking for? Browse other questions tagged analysis strategy theory or ask your own question.

4
Best White Move
2
UCI engine state notion
7
Analysis of a position-Why is my move so bad?
10
Analysis of a very complicated end position - why is this move leading to a draw?
13
Why is Kh8 the best move in this position for black?
6
Usefullness of analysing ones own games with an engine
10
What are some games I can watch to become better in playing chess?
2
Analysis of a position of a low rated player in order to improve
3
NNUE Based Engines - Post Move Analysis
6
What is the difference between a brilliant move and the best move?