Program that will give all available moves given the state of a board, including check

I am trying to write a program that will give out every possible move for every piece (one move deep) given the state of a board. I have already done this such that it works with everything except check. It will allow the king to move itself into check, and it will allow a piece to be moved out of the way such that it places the king in check. I can't think of an efficient way of removing these moves from the set of moves I generate.

I am storing the board as a list of lists, where each list is a row on the board. Black is at the top and white is at the bottom. Lowercase is black, uppercase is white.

The moves are stored as a list of lists, where each sub list contains the current coordinates of the piece and a list of all available moves for said piece.

As the pawn at 1, 0 can move forward either once or twice.

These are then stored in two separate lists, white_moves and black_moves.

So, I think the best way to prevent the king from moving into check is seeing if any of the moves generated for the king are in the opponent's moves, and then removing them from the king's moves if they are.

However, I can't think of a good way of determining if the movement of one of our pieces will result in the king being exposed and thus in check.

EDIT: I also need to deal with situations like this 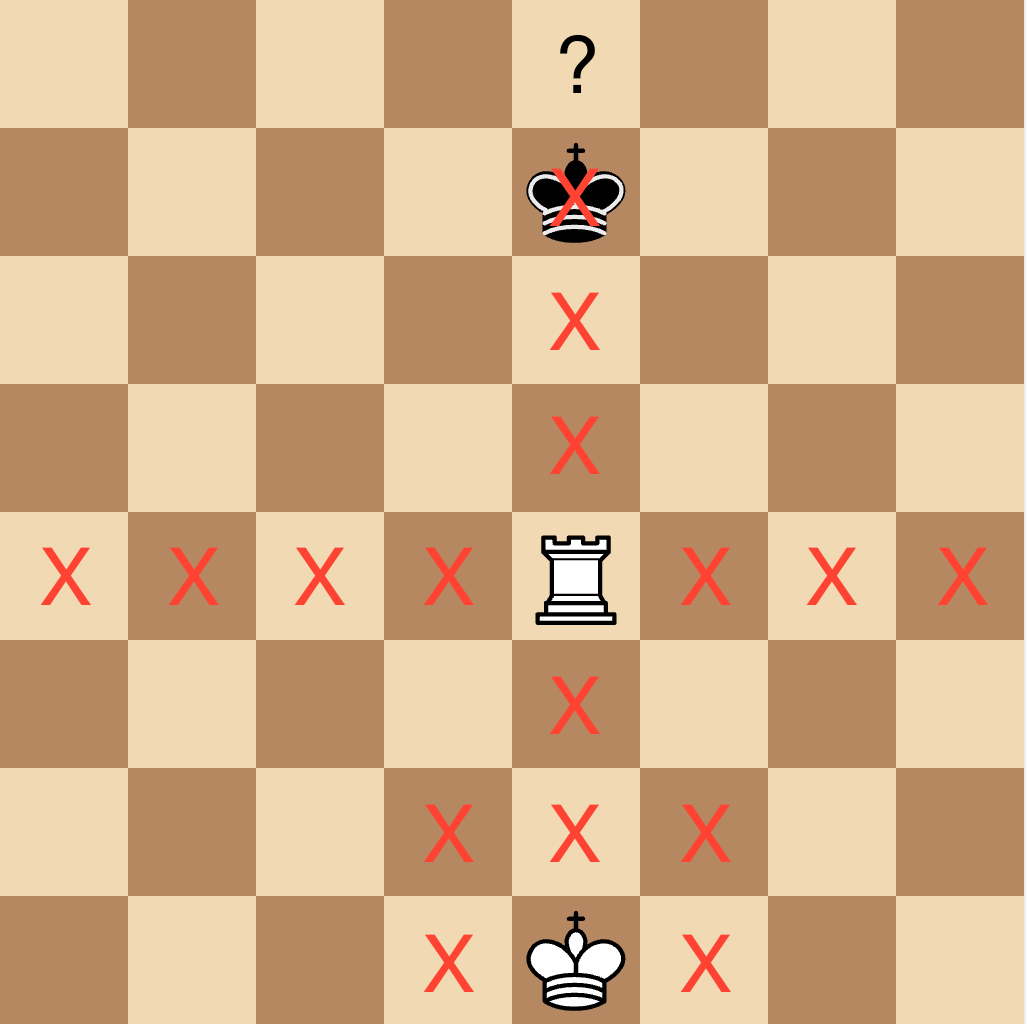 You seem to be writing a move generator.

Conventionally, a set of legal moves is generated by first generating a list of pseudo-legal moves (i.e. all moves which could be made, ignoring the fact that the king needs special treatment) and then filtering out moves which leave the king in check.

The legal move generator in Stockfish (one of the strongest chess engines) does exactly this - moveList is initialised to a list of pseudo-legal moves, which is then iterated over to filter out illegal moves with pos.legal.

You can implement the detection of legal moves by simply 'making the move' (creating a board state after the move) and then checking if any piece attacks the king, though of course more efficient implementations are possible.

Here is some Pascal Source code from Borland 1985 that uses an AttackTab to determine whether a figure is attacked or not. Since you are interested in the algorithm this code might give you some insight.

Unfortunately I don'get the syntax highlighting to work.

then you import chess

Not the answer you're looking for? Browse other questions tagged programming check or ask your own question.

8
Moving a piece out of the way to check
3
Why is the definition of check not circular?
2
Is this the correct flow of a chess game?
2
Best way to loop through all possible moves (Alpha Beta)?
3
How do I apply moves (bitboard) and continue searching? My current attempt is throwing a strange error!
2
Storing chess position in 24 Bytes
12
Do chess programmes keep a history of the full board for each move?
3
How can a check evasion move generation algorithm be done efficiently?
2
Using stockfish from command line to calculate the total number of legal moves for each side after a given move