16 roses, 16x16 board; maximum double-attacked squares while all 256 squares are attacked at least once?

The rose is a piece that is best described as a "circular nightrider", able to reach up to 32 other squares from the center of a 13x13 area by making consecutive knight jumps in a rotating fashion in a single move as long as no landing square en route is occupied. Incidentally, this rotating movement allows it to essentially pass a turn by returning to the square which it started its move from if it's completely unobstructed along at least 1 circle; though it obviously does not protect itself this way. I'll provide a diagram to illustrate its movement capabilities: 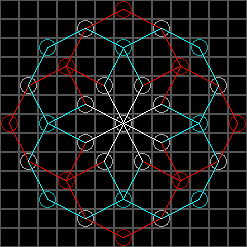 With 16 roses, including but still obstructed by squares occupied by other roses except the square occupied by an observed rose itself; what is the maximum number of squares on an otherwise clear 16x16 board that can be double-attacked while all 256 squares are attacked at least once each? For the purposes of this question, a square that is attacked 3 or more times does not count for anything more than a square that is attacked twice.

I feel I should note that I personally have yet to find an arrangement that attacks all 256 squares at least once by my own efforts; the very corners of the board in particular appear to require poor positioning in order to reach. However, seeing as 16 roses times 32 squares a single rose can theoretically attack creates a theoretical max of 512 attacks; I will be very surprised if an arrangement that meets the "attack each square at least once" prerequisite actually doesn't exist. If it should seem that this is the case, I would like an explanation as to why.

Sopel hasn't been around for a couple of years, but his solution is pretty and worth posting. 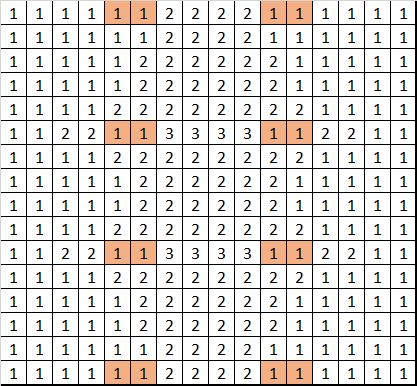 All the squares are attacked from 1-3 times, including the squares which are actually occupied by the roses.

Addressing the original question: 100 squares are attacked more than once, of which just 8 are attacked three times.

19
Bizarre pin rule: pinned pieces do not attack
5
What is the maximum number of squares 8 queens and 8 nightriders can attack on a 16x16 board?
12
Is the number of legal chess positions odd or even?
1
What arrangement of 8 each of these 4 different compound leapers has the "strongest coverage properties" on a 16x16 board?
10
Maximum number of knights populating a chess board so that no knights are attacking one another
5
How many more squares can you attack?