I was looking at the computer analysis for a game I played and I need some help to understand a line found by the computer.

After a balanced game (started with a Torre Attack) we arrived at the following position: 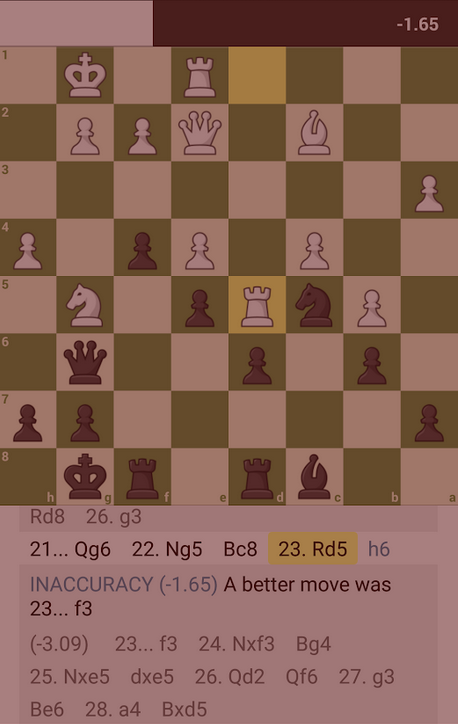 You see at the bottom the line suggested by the computer instead of my 23..h6 (that didn't lead anywhere in the end).

This interesting line starts with 23..f3 24. Nxf3. I understand why eventually we arrive at the position below with 27..Be6. But the computer suggests 28.a4 instead of moving the rook. Can you please explain the engine analysis here? 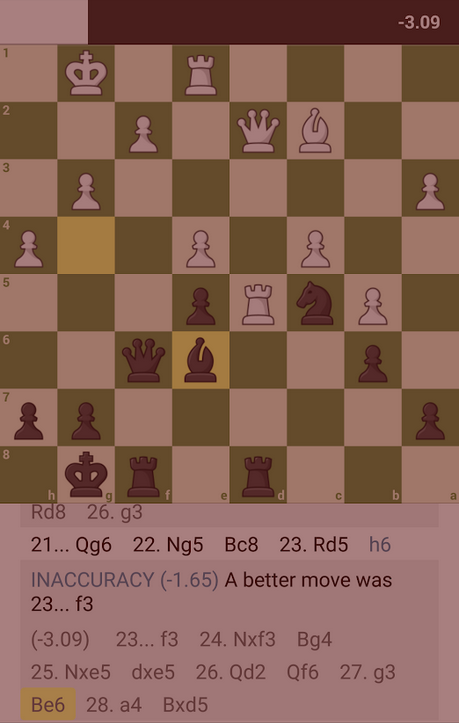 You are threatening Bxf3 to win a piece, since the g2 pawn is pinned. So sacrificing the f3 pawn gives you great initiative and attacking options, and keeps white pinned down.

Even if white moves the king to avoid the pin, with say Kf1, you can take in f3 with the rook and if white captures back with the pawn Bh3 is mate:

Running the king to the other way, h1, is also equally bad, because Rf4 becomes undefendable:

So as you can see, the attack becomes quite strong, so the engine suggests white to sacrifice the knight to gain counter attacking options, and not lose on the spot. Even though the position is still lost regardless.

I understand why eventually we arrive at the position below with 27..Be6. But the computer suggests 28.a4 instead of moving the rook

Well the exchange sacrifice on d5 isn't particularly bad considering the position, and how the d file becomes closed, but you get even further down material. Also other than Rxd8 you only have Rd6 to not sacrifice the exchange but that loses instantly to Rxd6 followed by Qxf2+ leading to mate.

The answer to "Why not Rxd8?" is: The engine didn't have enough time to think. The suggested move by Stockfish 10 in this position is in fact Rxd8 followed by either Qe3 or Qe2, as you can see in the following picture: 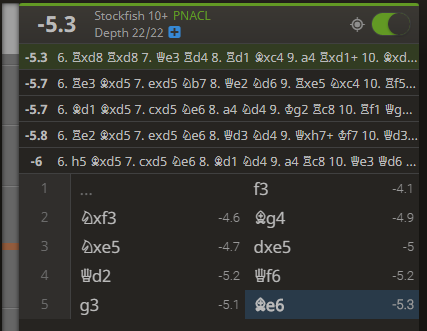 In the first position, f3 is good because it will open the white K after Nxf3 Bg4 then Bxf3 or maybe Rf3 in some cases as the light squares will be very weak (the analysis gave up the Nf3 with Ne5 immediately since the position was so bad that giving up a piece was "best"...if that is best, then it is dead lost). What is left is a HUGE Nc5 compared to a pathetic Bc2.

In the second diagram, you still have that Nc5 vs. the Bc2, but white is already down a piece. That is just lost, and a matter of time.

Not the answer you're looking for? Browse other questions tagged analysis middlegame or ask your own question.

15
Analysis of positional play by a very aggressive player
6
What is the best line in the Fried Liver
6
Why does Caruana kick Aronian's bishop?
6
Question about the move h5
2
Bronstein vs Winter
4
What did I blunder at move 23?
5
Playing d5 in the Pirc defense
17
Why does the engine dislike white in this position despite the material advantage of a pawn and other positional factors?