I came across the following game and was surprised to find that it was played between players with 2200+ ratings: 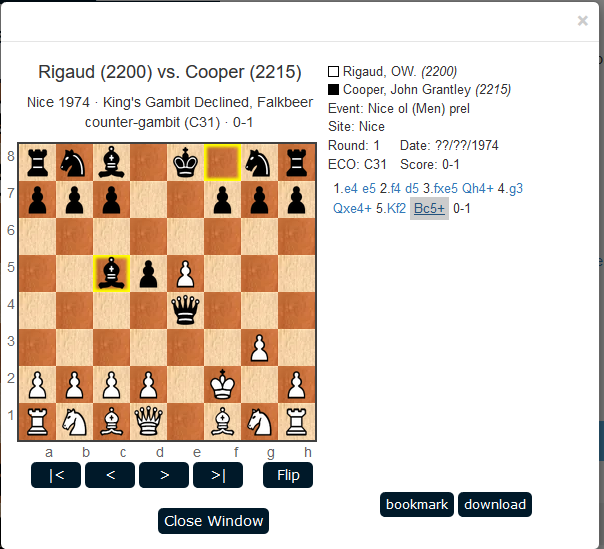 How do players of level 2200+ lack the very basics of opening principles to play a game like that? In general, how to beat a professional player with only a few moves in a well-prepared opening?

In short, after some investigation, I do not believe that white was a 2200 player is the real answer. First, I found it odd that it says he was exactly 2200. This is the only tournament I can find that he ever played, and it was an Olympiad, which had to be FIDE rated. He was also from Brazil, which was not a strong chess region in the world at that time. It was also at a time that FIDE ratings started at 2200. I strongly suspect that it was used simply because the tournament director had to use it for rating purposes only, and there was no other rating he could use.

That final position has been reached in my database 9 times. The losing move, 3.fe has been played a whopping 37 times, once by a 2149, but mostly by players 1900 and below. These statistics tend to bolster the idea that he was just a weak player, and that was not his real rating.

That is my real answer, but I have other thoughts on the matter if we were to assume that there are Masters, who have lost easily.

I started playing just a few years after that game, and it starts with the fact that it was a VERY different time. There were only books back then to study from, and not everyone had access to a decent library...in third-world countries, especially.

As a Master, who has never relied on opening theory myself, rather just using an understanding of opening pawns structures, I can tell you that it is easy to find yourself in a position that is very unfamiliar to you.

I also agree with DM that 2200 is hardly a professional....even 2400 is not in most cases, but they may earn a living teaching.

Lastly, another problem is that that early in the game, your sense of danger is not as keen. I once played a 2015 player in a team match. Here was that game. I have won a good number of tournament games in under 10 moves.

White (Rigaud) did not have a Fide rating.

Until 1981, the Fide rating floor was 2200, which means that any rated player had at least 2205 and that non-rated players taking part in a Fide-rated event were given a provisionnal rating of 2200. This is the case of Rigaud in Nice 1974.

In other words, 2200 only means that the player was unrated. This was pretty common in the Olympiads, especially as very few players (~1000 worldwide) had a rating in 1974.

Thus Rigaud real level might be anywhere between nowadays-equivalent 1000 Elo and candidate-master level. In case he was a strong amateur, his horrendous third move might be due to mechanical play in opening, fingerfehler (fxe5 instead of exd5), touch-move rule or whatever. In any case, not a great day for him.

Anyone can make a mistake. Masters don't make many that are this bad this early in the game, but it does happen.

I don't agree with your statement that this game demonstrates that White "lack[s] the very basics of opening principles". He traded a wing pawn for a center pawn, which is very much in line with opening principles. It's just that the move loses tactically to Qh4+. g3 doesn't work like it would after 1.e4 e5 2.f4 Qh4 because the f-pawn is no longer on f4 to block the queen from going from h4 to e4. It's a blunder, but it's not really a violation of basic opening principles. (And if you say that it's a violation of opening principles simply to make a third pawn move without moving a piece, then I'll point out that 3.exd5, which also moves a pawn again, is the most common and highest scoring move from that position.)

The game is 45 years old between two players who weren't GM or IM level, and I doubt anyone really knows the details at this point. Yes, you would think that a master playing the King's Gambit would know the Falkbeer well enough to avoid that mistake. But 2200-level players are generally not professionals. The explanation is likely that he simply misremembered which pawn to take. Perhaps he expected some other line, or even some other opening altogether (maybe his opponent usually played the Sicilian, for example.)

This sometimes comes from playing unfamiliar openings. 2. f4 (King's gambit) is nowadays such; it was played much more commonly 100 years or more ago.

It has a hidden "flaw" for White, the ability of Black's queen to check at h4. White must keep the pawn on f4 to protect the pawn e4 from this threat.

The mistake can come from lack of experience. A century ago, "good" players would not make this mistake, nowadays, it's possible that a good player might. It's also possible that the 2200 rating was rounded "up" to the minimum rating for the tournament. But the fact of the matter is that the King's gambit was tricky for both sides when it was played around the turn of the 19th and 20th centuries. Some of the best players in the world were caught in various traps, although slightly less obvious ones.

According to this source:

Not the answer you're looking for? Browse other questions tagged opening blunder kings-gambit or ask your own question.

19
Opening with knight
8
Do professional level chess players mainly stay consistent in their opening play?
6
How to know how good an opening/defense scores?
31
Why is the French defence not played at the highest level?
5
Are there any lines in the Lopez Opening / MacLeod Attack that are actually good for White?
11
Why 2.d5 is much less common than other responses to the Mikenas Defense(1.d4 Nc6)?
5
Ways to notice opponent's threats during one's own move
13
(For training purposes) Are there any openings with rook pawns that are more effective than others (and if so, what are they)?
8
Empirical question: Is a drawish opening line really a concern for an ambitious player?
24
Why does chess.com consider this promotion a blunder?