What is the most effective way of reducing blunders?

Many people suggest tactical exercises as the best form of study for this purpose but I find that it only attacks the problem from one dimension (not making the strongest in a position). Analyzing my own games I find that I'm much more likely to lose a game by making a dumb blunder rather than missing a winning combination, so solving more chess puzzles doesn't seem very effective at improving that. Any other forms of exercise that could help with this?

If you want to avoid "dumb blunders" - i.e. just dropping a piece you've left hanging on the other side of the board - a simple method is to take an inventory of the position before you do anything else on each move. Checking which of your pieces are attacked and which of your pieces are hanging would be a good start. The brain will catalogue this information into 8x8-grid punch-card type patterns in your head that act as a warning system against stupid errors.

It can however be surprisingly difficult to take a regimented approach like this even if on the surface it seems quite a trivial task to complete at the start of each of your moves. The brain has a tendency to immediately want to investigate interesting lines and will wander sometimes never to return. Even harder if you're an older player who has never applied such discipline.

But if you stick at it over time it becomes second nature and you just see better and don't blunder as much.

As a human you are intrinsically self biased. This is hypothesized to be an evolutionary adaption and it is impossible to suppress it, or more accurately to think objectively about yourself. Until you are accurately able to gauge and control the degree to which your self-bias affects your own thinking, this will be the primary cause of blunders in your chess games.

How can you be so certain that self-bias is the primary cause of blunders?

Well, let's examine the definition of a blunder more closely:

Especially among amateur and novice players, blunders often occur because of a faulty thought process where they do not consider the opponent's forcing moves. In particular, checks, captures, and threats need to be considered at each move. Neglecting these possibilities leaves a player vulnerable to simple tactical errors.

blunders often occur because of a faulty thought process where they do not consider the opponent's forcing moves.

implies that blunders occur because a lack of diligence on the side of he who blunders. Excluding time-control troubles, there are only a few remaining possible reasons for not considering the best moves of your opponent and most of them deal with the self-bias:

How can I overcome this?

Short answer: you can't. By definition, it's part of you, unless you are born with some weird genetic mutation. Luckily, there are all sorts of ways to "trick" your brain into avoiding a thought process that is controlled by the self-bias. My favorite trick is simplest of all and it comes from an old adage:

Before you judge someone walk a mile in their shoes, that way you are a mile away and you have their shoes :)

To make it clear, what I mean is simply look at the game from your opponen'ts perspective, and search for that "killer" move to win the game, but on his side. That way, you can spot it and direct the game away from it.

Tactics cover a broad area that doesn't only concern mistakes that your opponents make. The pattern recognition faculties that you improve through tactics also help you realize the blunders that you yourself make. I don't recommend trying to change your style of play at all - I tell my students that at an early level, one of the most important things is to not hang pieces and to take advantage of your opponents' hanging pieces. Thus, before you make your move, specifically ask yourself if you see any potential tactics for your opponent. Likewise, do the same after every single opponent's move.

It has 18 Rules to find so called "Hazardous Elements" - HE. Before making the move which we selected we need to check for blunders. All be blunders means that we do not see any HE or we do not see a method how to use HE (about 20 typical methods descirbed in the System). Thinking algorithm to avoid blunders is in the scheme. 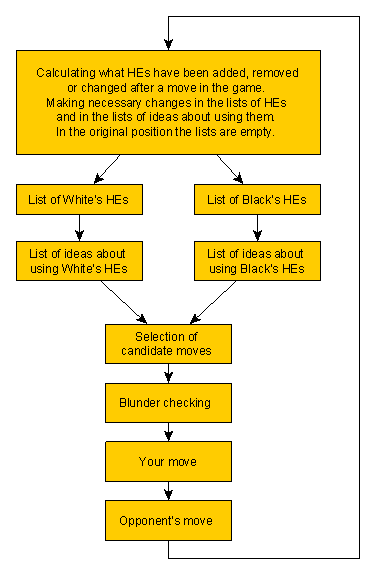 I see a lot of responses recommending looking at the game from the opponent's point of view, and I can see why, ever since I started adopting this technique in my games. It really works.

Until very recently, I always used to look at my game from my view, my plan, my killer tactic, my decisive blow -- which, theoretically, if implemented perfectly should be sufficient. But recently one of the approaches I use is to analyze every move my opponent makes with a "Okay, so what's his plan?" or "Why did he do that?" before I start working out my plan. If I see his idea easily and feel its not threatening enough, I proceed with my plan.

If I can't seem to find his idea easily, I conclude that either I need to look harder because there's a killer attack coming on or that it's a weak/aimless move. I do dismiss activating pieces, like I used to do earlier, as aimless moves, but instead look for ways to stifle this. The downside of this approach is that you have be good at time management, since first working out your opponent's plan, assessing the threat, and then formulating your own plan usually takes more time than if you were just thinking from your perspective.

Personally I have noticed many of my worst blunders seem to come from trying to play on a square I don't control. Basically I'll get so focused on trying to attack a particular target that I will hang a piece trying to get at it. If I see myself starting to do that, I'll stare at the square I'm likely to blunder on and tell myself "NO" (not out loud unless I am trying to freak my opponent out...) or imagine a big red X over it. Seems to help a little.

This will greatly cut down the direct blunders. However, as you play with stronger opponents, you will need to do #2 several times to see more than 1 move into the future, but it gets pretty hard depending on how well you calculate and what time settings you play with.

Also, as a bonus, study lots of tactics, and learn how they can be used against you. The most common ones I think are:

But one can never do enough calculations. It would be unfair to say white blundered in this game.

Blumenfeld's Rule: Once you have decided on a move, stop thinking about your analysis and look at just that move as if you were reading it in a book, or having it played against you.

The "full monte" on this is that you write the move on your scoresheet, but some players started using this to excuse taking notes during a game (writing 4 and 5 moves down before playing one) so it's now illegal in USCF events. But just fixing it afresh in your mind will be almost the same.

From my own experience, and i'm not a highly rated player or anything like that, the best way to eliminate blunders is not to play aggressive openings, defensive players commit less blunders, they may lose because they don't have the space advantage but they don't make blunders as much as aggressive players.

Why do players make blunders usually?

From my experience, the majority of the blunders is simply because the players fail to count the defenders or because they rush to attack. Of course failing to understand your opponent opening will result in blunders but this is usually isn't the main cause with average players.

So take your time, develop all the pieces, try to control the pace of the game, space advantage is so important but don't rush it, and keep your game simple, don't play positions you are not familiar with.

Here's an interesting alternative. Play bullet chess. Bullet chess is all about seeing your opponents threats and dumb blunders. It helps you familiarize with the pieces and how they move and helps you to avoid blunders and see threats quickly. Bullet also improves your ability to cope in time pressure, and that is where most blunders happen. Of course, bullet chess should not be the main means of improvement, but it does improve one's abilities during time pressure.

The shortest ways to prevent Blunders is

I saw this Video from one of my Chess Teachers GM Igor Smirnov . Here is the link from his Youtube channel . I hope this would be of some help to you.

How to Eliminate Blunders - 1

How to Eliminate Blunders - 2

This answer may be redundant by now, but when I was regularly playing tournament chess, I wrote down 2 pieces of advice for myself in advance on a 3x5 card (which is probably illegal now). They were "Anticipate" and "No Blitz". since most of my blunders stemmed from not checking my opponent's potential replies and from moving too quickly before I had double checked my own intended move. This worked pretty well, for me at any rate.

Not the answer you're looking for? Browse other questions tagged learning psychology best-practice blunder or ask your own question.

9
Ways to improve defensive skills
13
What is a good playstyle for players that are not good with deep calculations?

29
Most effective way to achieve a 2000+ rating in one year, starting as a 1600?
16
What is the better way to stop blundering all my games?
5
What are good ways to check blunders after the match?
3
On blunders in PGNs
6
How do i prevent blunders?
20
Stockfish blunders away a piece
4
What are the worst blunders ever committed in a world championship match (final)?
17
Improving the observation skill & making less blunders