What are the average Elo and USCF ratings?

I'm not sure if there exists an average, but what could be considered an average rating range in these systems?

I took the following data from the September 2013 Golden Database1 and "active" players are players with a USCF membership expiration date later than January 1, 20132. All ratings are regular ratings. Note that players have an established rating after completing 25 games. 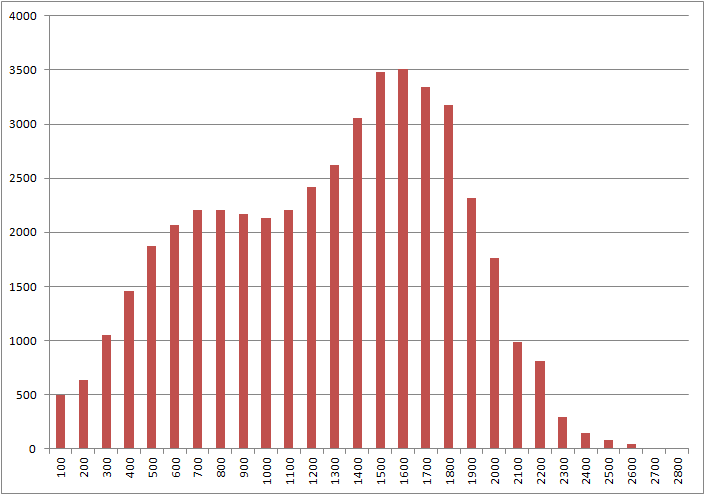 Note that unrated players were discarded and that no checks were done on the data (duplicate entries, placeholders, etc.).

Distribution of ratings by age 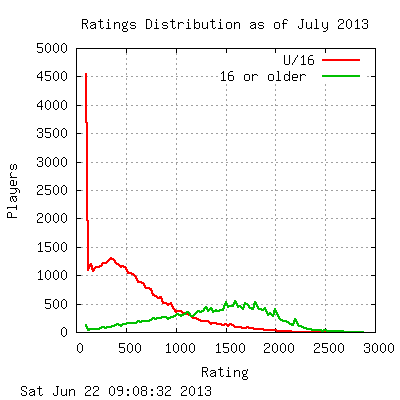 This image comes from the uschess forums.

1: The Golden Database is a database provided to USCF affiliates and TD's that includes the names, ratings, and expiration dates. It can be downloaded from the USCF website
2: I picked January 1, 2013 as an arbitrary cutoff date. If there's a better and easy check for whether or not a player is active I'm happy to add additional data or update these stats. 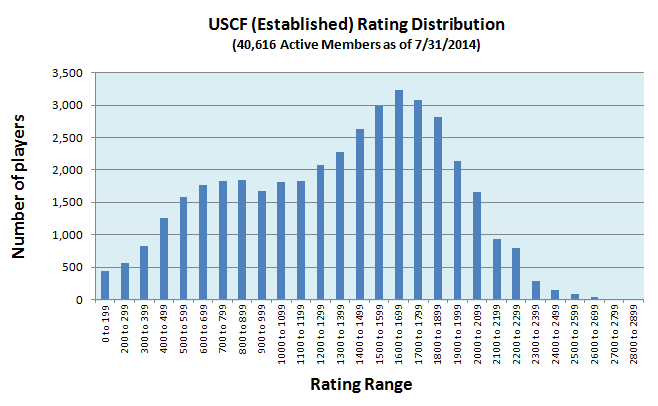 The data is from the Golden Database. It uses data from just current members with established (non provisional) ratings. Note that only "regular" ratings are shown, not Quick ratings or blitz ratings.

The overall shape of the graph, of course, is almost identical to the first one, with data from 2013.

(I assume in the following discussion that by "average" you mean median, not mean.)

The latest rating distribution chart for the USCF I could find was from 2004 (here). You can see from it that at that time the 50th percentile was about 1050 for all players, or 1280 when just adults are considered. (USCF ratings have inflated a bit in the last decade so they are probably a bit higher now.) This is for all members, not just active ones; the median rating for active players would be higher, probably by 150 points or so from looking at the graph here.

While the numbers drift and have to be adjusted from time to time, the average USCF rating is supposed to be 1500.

The average is the sum of list values divided by the number of list entries. Unfortunately, since list values do not contain equivalent information, averaging them does not reduce error. A 500 rating losing to grandmasters with a single draw denotes much greater proficiency than many wins against players who have only just learned how the pieces move (I refuse to embarrass people by citing names). I have found that when players know each other's rating, the lower rated player lets up while the higher rated fights like a demon (peruse any tournament crosstable). Ratings are manipulated by players who lose unimportant games and by organizations (CCF, dare to deny it!) who pin ratings because of accidental outcomes. Ratings are inappropriately used (by almost all organizers) to assign prize classifications. Average rating does not contain any information for the whole list. However, for a particular event, players tend to perform relatively in accordance with their ratings. This is not because the ratings are accurate, but because the players want them to be so (I want it, and I don't know any player who doesn't).

Not the answer you're looking for? Browse other questions tagged rating elo uscf or ask your own question.

-1
What is the mean and standard deviation for men's and then women's standard FIDE ratings for those 2000 and above?

19
Is there any software or web service for club-level Elo ratings?
0
Is it possible to improve the Elo rating system like this?
3
Chess Engines and Elo Ratings
3
Verbal description of FIDE/USCF ratings
3
Why are USCF quick ratings lower than USCF regular ratings?
5
I played my first (rapid) tournament recently and I wanted to calculate my ELO
4
Absolute strength and stability of Elo
7
Historical motivation for the 1200-1800ish rating average
2
Where can I find a description of the "old" USCF rating system (that was in use through the 1990's)?