What is the average length of a game of chess?

I hope this is an appropriate question for this site as I've been wanting a reputable answer. Of course the length of games can vary wildly, but what is the expected number of moves until either a checkmate or trivial draw position is reached? Preferably the answer will be backed by some evidence and is not just "40 moves" like every other internet source.

EDIT: I opened Mega Database 2012 and found there were 515539 games ranging from the 1400s to 2011. As I couldn't find an efficient way to parse the data, I just used the median move value (I hope it's normally distributed. It's probably not though as the largest number of moves was 277... oh well). The median value was 37 moves, but I'm sure that it's a right-skewed distribution given the max value. If I had to hazard a guess to the average value, I'd put it slightly greater than 40 :)

In addition, keep in mind that these are all recorded games. This means that their origin can be from tournaments, matches, or even online competitions. Indeed, the 277 move game was played in a tournament on the Internet Chess Club.

Oddly enough, I found that the average length of a game (played by humans) is roughly 40 moves. Based on the statistics provided by the Chessgames database (685,801) games, the average number of moves is 40.04. Chessgames tends to only include player games of a high caliber, so this doesn't really take into account amateur tournaments. As these games are played by humans, few of them tend to end in checkmate but rather a draw by mutual agreement or a resignation in a lost position.

This may not be the best source, but I've played in over 320 tournaments in my life and many of these games are imported into my personal database. The average number of moves per game is around 38.

I do not have access to my Mega Database 2012 (a database provided by Chessbase) at the moment, but I will post the average number of moves of approximately 5 million historical games when I open it.

I did this graph based on 731,000 games played on the free internet chess server by players with rating above 2000 during the last 13 years with non-blitz time controls. The average length is 79 half moves, the median is 70 and the mode is 51. There are also a lot of very short games due to people resigning early. 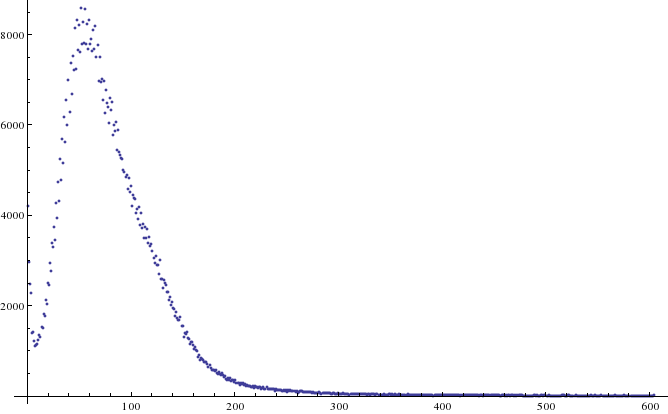 Update: As it turns out, the above curve can be very well approximated by a log-normal distribution. That is the logarithm of the games lengths are normally distributed. We can then consider the expected game length remaining given how many moves have already been played, which may be interesting for chess engines. It looks like this: 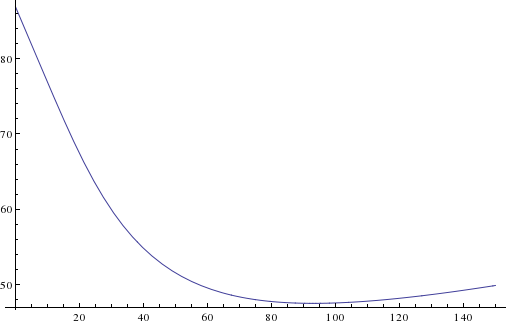 If you want to use it for figuring out how to use your time(*), the function can be very well approximated by the following expression. (Again remember, that the result is in half moves.).

(*)Though you would probably want to take other factors into consideration as well.

We can make a small analysis from a theoretical point of view:

So, on average, we can expect that each player loses 1 piece every 5 moves approximately. It takes ~8*5=40 moves to reach a population of 8 pieces vs 8 pieces. After 40 moves, with both "armies" reduced to its half, there is a reasonable expectation that one of them has already lost its king, and so the match is ended.

Sahovski Informator publishes approximately 700 of the Best or Most Interesting games of the preceding several months, played by Grandmasters around the world. I have found the average number of moves in several volumes to converge at between 43 and 44 moves per game. This is, of course, for Grandmasters in tournaments or matches, so they are not giving up easily. Also, interestingly, the number of moves is slowly increasing as time goes forward, indicating perhaps that fewer mistakes are being made, so that games are taking longer.
Also, there is a small variation in length based on the openings - e4-e5; d4-d5; d4-nf6; e4-c5 etc, but it doesn't seem significant.

7
What is the number of legal positions in a chess game?
7
What is the average length of a game of chess with only random moves?
2
Average number of moves per game
4
Why does FIDE classical chess have a time limit for the first 40 moves?
1
Need help spotting whats wrong?
-3
On average, how many pawns are there at the start of the endgame?