Ask Question
Asked 2 years, 11 months ago
Modified 2 years, 10 months ago
Viewed 243 times
5
Closed. This question needs to be more focused. It is not currently accepting answers.

I'm trying to put together a flyer of the golden rules in chess for kids that are absolute beginners. I noticed that they ran into the same trivial mistake that could be easy to fix with a simple switch, and I guess the flyer could help flipping it. Here is my list so far, kinda ranked by how important the principles are :

What do you guys think of it? Any other important principles I didn't think of? Feel free to use it.

Edit : Here's the final look of it. Feel free to use it ! 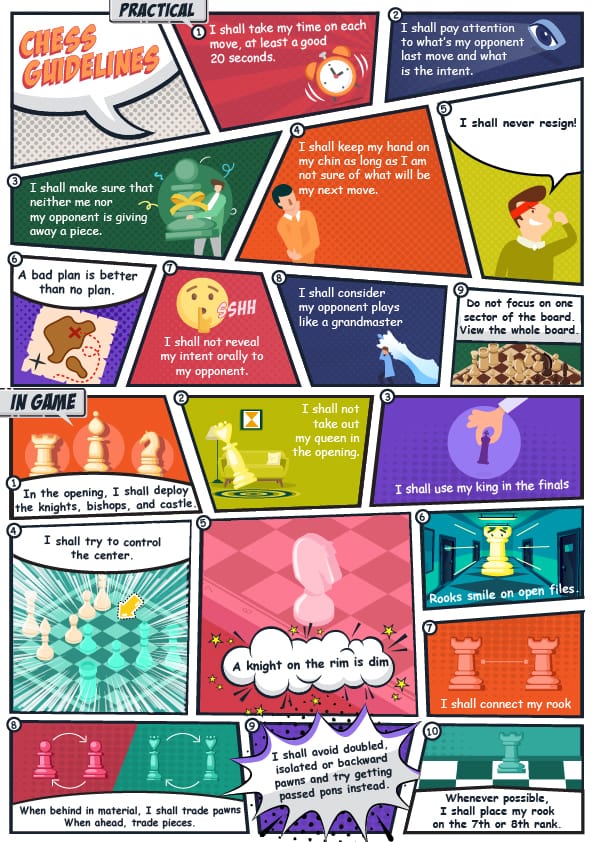 The idea of giving your students some guidelines for playing good chess is good in principle, but we have to be aware of its limitations too. For the "practical" ones:

The "in-game" principles are generally OK, but meaningless outside of their context, sometimes even false or contradictory with one another. If you are going to present them, please do so by providing good examples of how those rules actually apply.

As a final thought, please keep in mind that it's better to let your student figure out the "in-game" principles themselves rather than you showing them as if they were the Ten Commandments. Your mission should be to give them hints in their discovery, rather than being the word of Truth. For the sake of example, let's take in-game rule No. 6. I would review one of their games where they have an awful knight, then try to help them figuring out why the enemy's attack was so devastating. Eventually, they'll see how useful the knight would have been in an active square creating counterplay

Not the answer you're looking for? Browse other questions tagged teaching or ask your own question.

7
How do you teach chess to a beginner / rookie?
11
Why is it a good idea to teach chess in schools?
5
Teaching 3 years old kid chess
3
Chess movie as educational incentive
8
Does chess help develop moral virtues or correct practical attitudes?
5
5 year old chess
3
Ideas for giving chess lessons at school for differing levels of playing strength?
3
Recommendations for kids sites