What are the rules of chess in a nutshell?

I believe the question How to start learning chess? is actually two questions only one of which is a duplicate. This question is a fixed up version of it which asks only the other one of those questions.

Would it be possible to explain the rules of chess in a nutshell? A clear short description of the rules is nowhere to be found but I'm sure it can be explained very simply.

The definitive guide to chess is given in the FIDE Laws of Chess. The game itself is defined by the first five articles and this is short.

There are many more articles, appendices and even guidelines in the FIDE Laws of Chess which cover over-the-board competition rules and practices but these are not required for a basic understanding of the game, only for tournaments.

How to win: preventing the opponent's king from moving while attacking it. This is a checkmate.

That's the goal of the game. The rest of the rules just relate to how each piece moves.

King: Can move one square in any direction.

Queen: Can move any number of squares in any direction, but can't jump over pieces in the way.

Bishop: Can move any number of squares along any diagonal it's on, but can't jump over pieces in the way.

Rook: Can move any number of squares horizontally or vertically, but can't jump over pieces in the way.

Pawn: Can move one square forward, and has the additional option of moving 2 squares forward if it's on its starting square. However, it captures enemy pieces by moving one square diagonally in either direction. The pawn is unique in that it captures and moves differently (unlike all other pieces). In addition, if the pawn reaches the end of the board it turns into a queen, rook, bishop, or knight (your choice).

Also, the game could end where no one wins, a tie or draw. This can happen in a variety of ways:

I've left out some rules, but this is the meat of it.

Yes, the rules can be explained in a nutshell as follows. It uses some ideas I originally wrote at https://en.wikipedia.org/w/index.php?title=Chess&oldid=649489454.

Chess is a 2 player game. It starts with the pieces arranged like in the following image. 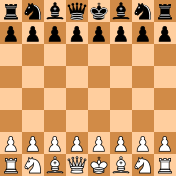 Chess without some of the extra rules works as follows. Each player on his or her turn can make any move as long as it satisfies the following conditions:

There are also extra rules. Some of them are very clear and considered a universal rule of chess. Others are unclear how people should play in casual games but are clear in a certain type of tournament. I'm not absolutely completely sure of what they all are. Some of the clear ones are

For a certain type of FIDE tournament with a certain rating, the rules are as follows:

3
How to start learning chess?

28
Rules: en passant and draw by triple repetition
1
Was this considered a stalemate?
5
What ambiguities remain in the laws of chess?
14
What is the result? (Rules + puzzle)
9
Rules: How does right to castle and en passant get considered for the purpose of calculating a threefold repetition?
7
Official rules for castling in Chess960? (Is there a loophole?)
4
Why does FIDE recommends using German numbers and piece names for blind and visually impaired?
12
Games won by the stalemated player?