Long ago in 2000, Tim Krabbe presented Harry Goldsteen’s “The Horse Concoction,” presented here on the Internet, which some of us know about.

Take an empty board. Put white pawns on b3, b6, h4 and h7, and a white Queen on f1. Now add ten black knights, both Kings, and the necessary material to enable White to stalemate Black in one move, and Black to win after any other move.

The retrograde analysis isn’t too hard to understand, but there is just one part that he skips over that nags at me, and I cannot figure it out.

Firstly, here is the unique position that solves the problem.

I cannot figure it out myself, although I faintly suspect it with having something to do with whether or not white can get 3 light-square bishops.

This is just the very beginning of what must have been Goldsteen's demonstration, but if anyone wants to carry on from here...

Let's try and build the position after White's key move.

The bNh8 cannot be pinned, so there must be "blockading" knights on f7 and g6, that are pinned themselves.

Because squares f7 and h7 are occupied, the bNg6 cannot be pinned diagonally. It cannot be pinned vertically either, otherwise we cannot pin the bNf7. Hence it is pinned horizontally, leftwards.

The bK cannot be on f6 because there wouldn't be enough space to set up a pin on the f6-h8 diagonal. It cannot be too far from the bNf7 either, so you can conclude that the bK stands on e6.

The space available (or lack thereof) allows us to define the positions of four more pinned knights and four pinning pieces, leading to this position: 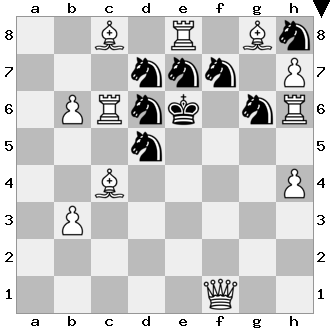 There will be two additionnal bN's, and two pinning pieces, on the e-file and on the e6-h3 diagonal.

To go further, I suppose we might discuss cases depending on the locations of these two bN's. A very important point is that Black must be winning if White doesn't stalemate, so most probably wK willl be under check by the 10th knight (as in the solution with a bNh1) to avoid allowing scores of possible first white moves. Most probably too, the bK will also have a free square to escape to, thus unpinning half of its army.

White already has three promoted pieces on the diagram. Since adding two more of them would be illegal (due to the remaining four wP's), it means that one of the last pinning pieces must be either the wQ or the wPh7.

There are only five possible stalemating key moves to consider:

As a consequence, the positions of the wP's on b3, b6, and h4 are certain.

Let's consider that White's key move is 1.Qf1-takes-the-knight-that-was-checking-white-King and try now to infer where the wK might stand.

Given that the wK cannot be on f4 or g5 (these squares are controlled by other bN's), the available square that is closest to the cluster of black pieces is d4, with d3 and f3 second-order possibilities. Because it is very hard to imagine Black, who is down scores of material, to be winning against a far-away wK (say, on c1), putting the wK on d4 could be the most logical next step.

As a consequence, the pinned bN on the e6-h3 diagonal cannot be on f5, and must stand on g4. To limit wK freedom, it is tempting to put the 9th knight on e5 (controlling d3), but it might also be on e3 or e4.

Which leads to this diagram before the key move: 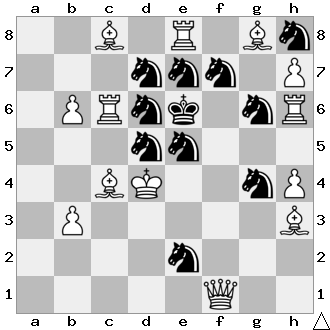 But this leads to several new difficulties:

In both case, adding white units reduces the number of previous captures by Black, and is very likely to be impossible while keeping the legality of the position (less captures means less paths to promotions for both sides).

The alternative, in case adding a wB would still allow all the promotions, is: 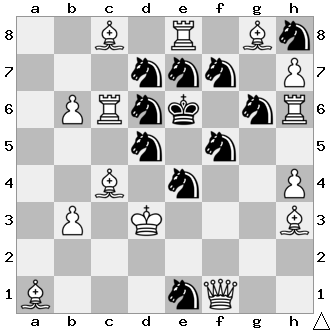 Then we really have a stalemate after 1.Qf1xe1, but demonstrating a Black win after the alternative 1.Ke2 is a long shot, since only two black units can move! The best try would be to put wBa1 on c3 and play 1...Nxc3+ followed by 2...Ke5 or 2...Kf6, but that would allow yet another variation starting with 1.Bxe1! And still... (funnily enough, 1...Ng3+ 2.Kxe1 Nxf1 3.Kxf1 is another stalemate, and if Black cannot win the wQ at once he should not dream of a long-term win and has to checkmate quite forcefully)

The third step should be retrograde analysis to prove that we cannot add a white knight nor a dark-squared bishop.

Edit: this step is actually pretty easy: Black needs three captures to promote all his pawns: one by the b-pawn, one by the h-pawn, and one by the e-pawn or the c-pawn to allow the opposing white pawn to promote on a light square.

As a consequence, the third diagram above is illegal. With a key move by the wQ, even without the stipulation that it should be the only move to prevent a defeat, I am thus unable to even reach a legal stalemate. [but I will not pretend I am 100% confident about all this reasonning; dear reader, please double check!]

The possible key moves that remain, because they allow more pieces to be present, are the non-check-parrying 1.h7xNg8:B and 1.h7xNg8:Q. I am pretty convinced that they cannot be mandatory to prevent defeat (and thus, that Harry Goldsteen is right - not a surprise!), but step four will be to...

I believe this is achieved by the following position: 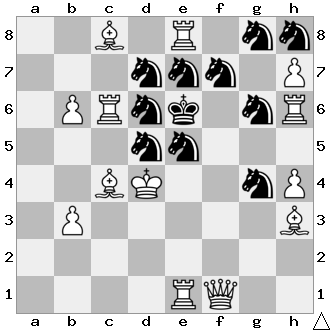 However, Black is clearly not winning after any other White move. Indeed, White has a direct mate in 1 with

Convincing oneself that it is really mate is a little mind-boggling with all these pinned defenders who cannot defend.

I may spend a bit more time and sweat to prove properly that this last position is legal, but I will stop thereafter. After reaching that point, I am totally convinced that Goldsteen's assertion that "there is no solution to the Horse Concoction with a bNh8" is absolutely correct.

An Editor’s Update: The position above is indeed legal, as shown by proof game below, by no means optimal, for the convienence of everyone who thinks otherwise and for the original answer’s benefit. If the original answer does not like this, the editor shall oblige their will.

EDIT: Due to the page freezing when this is in the replayer, it shall simply not be in it. Here's an Apronus link to play the game out for yourself.

Square h8 also being impossible is the result of incredibly complex considerations (Goldsteen spent a month and a half on this problem; 'Not much, for me') that would be beyond the scope of even this article.

There's no obvious reason why h8 doesn't work; a complete proof could even require more characters than fit in a Stack Exchange answer.

Not the answer you're looking for? Browse other questions tagged problems knights retrograde-analysis or ask your own question.