I played a game on lichess recently. Afterwards, I used the analysis feature, including the "learn from your mistakes" feature, and it said that 6. a3 by white was a mistake, with 6. Qa4+ as best. I'd like to know why, as I don't understand why 6. Qa4+ is superior.

In short: Qa4 forces black to lose grip over central light squares as black is tactically being restricted to recapturing with a queen on d5 instead of a pawn, leading to: 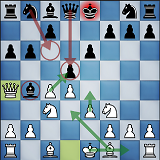 As opposed to any of the actually desirable and common setups for black, which might look like: (with Nf6 instead of Bb4, and quick Bb7 and castling being prioritized) 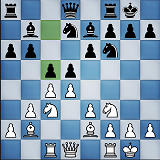 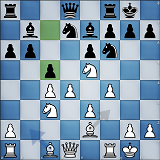 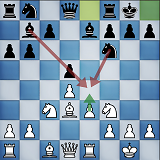 It helps to try and understand the purpose of every move at a basic level, let's start with your 3rd move c4: Clearly, one of the most common and signature moves of all queen's pawn games, but what purpose does it serve?

Openings are a lot about taking control over the centre and not conceding it easily to your opponent, so when white plays 1.d4, they're claiming control over dark squares, namely e5 and c5, similarly, black replying with 1...d5 they're reciprocating by controlling c4 and e4 (so light square control). And that brings us to the famous c4 move, which attempts to undermine black's control over light square, so whenever white manages to force black's hands into either taking on c4 or recapturing on d5 with a non-pawn piece, you could say white has achieved a small success in central control, which among other options may allow white to play e3-e4-e5 and take away more squares from black's minor pieces. These ideas should make it a bit more intuitive as to why, black recapturing with a non-pawn ought to be a strategic gain for white. Let's summarise with a diagram, in blue the desired central setup with d4-e4, and the green c4 the enabler, and in turn black's intends to keep maintain grip over d5 with e6/c6. 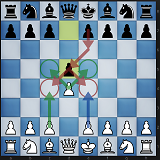 Now let's have a closer look at your game: 5...Bb4 by black is a terribly odd and poor move: black is playing rather inconsistently, first opting for an early queen-side development with b6 to fianchetto their c8 bishop, but then develop their dark squared bishop, temporarily ignoring the created light square weaknesses, in particular c6. Moreover, bishop developments before knights are possible but rather rare, in general knights are more easily developed (as their restricted movement makes their optimal development easier to resolve given a structure), and they in turn create useful space for the bishops. And your game makes for a perfect example of such careless development as it can be tactically exploited with an immediate Qa4+ which: 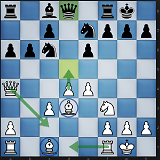 Note that black conceding the d5 pawn with either dxc4 or a non-pawn recapture would be acceptable provided they could maintain sufficient light square control with their minor pieces afterwards, e.g. a knight on f6 and a fiachetto'ed b7 bishop. The latter may further justify the opening of the long diagonal for creating active play against white's king.

Last but no least, at a rough basic level similar to our earlier discussions, there are openings where black even encourages white towards an early advancement of central pawns, which black aims to exploit by either fixing the structure and therefore inducing a weakness (like the King's Indian Defence) or by actively trying to undermine the central structure in order to create a weakened target (such as the Grünfeld Defence), all backed by an early kingside development.

9
Did Reinfeld make a mistake?
17
Analysis of positional play by a very aggressive player
4
What I thought was winning tactic, apparently was mistake
2
Is Bg5 a mistake or inaccuracy there?
2
Why is it a mistake to trap this bishop?
5
Why not 7.Qa4+ in Carlsen vs Navara QGD
1
Help needed to find the big mistake
9
Why is it a mistake to capture the forked rook?
5
Where was Stockfish's fatal mistake in this game against Leela?
1
Why wasn't Ne5 a mistake when I could just win the exchange in one move?