I had an idea for a type of stalemate: One side is stalemated with 8 pins in a legal position with as many pieces as possible, with all of the stalemating side’s units being “necessary.”

”Necessary” is defined as either pinning a piece, blocking a piece, or covering a king’s flight square. The king must be involved of course.

As a bonus optional question, what is the maximum number of units in a legal position with 4 “natural” pins, which means no promoted pinning pieces?

White is stalemated with 8 pins; removing any Black unit would break the stalemate. Black has promoted all of their four missing pawns (all into queens).

This is optimal because 4 pawns must be promoted to create 8 pins, with requires a minimum of 3 units, thus leaving 29 left for the final position.

Here is a maximal solution with all 32 units : 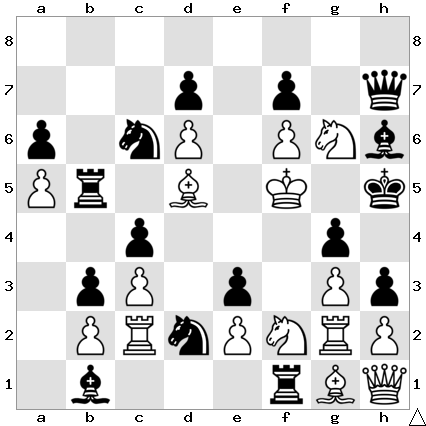 White's Rc2, Bd5, Nf2 and Ng6 are pinned. The king has no move and all the other white pieces are stuck.

Removing any black piece, or moving the black King away, would break the stalemate.

Removing the bPg4 would be particularly unfortunate because White, in spite of having almost all their army stuck, would deliver mate with their only legal move, g3-g4#.

Regarding the bonus question, for 4 “natural” pins, here is a position with 30 units.

19
Bizarre pin rule: pinned pieces do not attack
6
Detect pinned pieces code
13
Mutual Stalemate
5
Chess Engine: Generate a Bitboard of Pinned Pieces
28
Stalemate situation with all pieces on the board
2
What rearrangent of the starting position's pieces, in any manner, has the fastest stalemate?
2
Another mobility puzzle
3
Are there any games with 4 pieces (for the same player) pinned on the same rank?