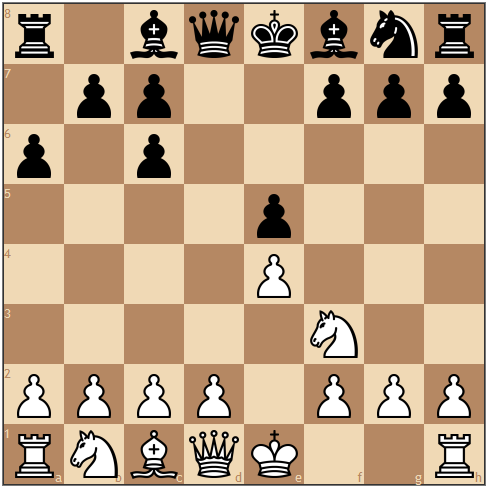 13
What color squares should pawns be on with one bishop left?
8
What's up with the doubled pawns?
2
Should I accept doubled pawns to remove the opponent's bishop pair advantage?
8
In the books Wojo's Weapons, why was Wojo occasionally known to say "I'm too lazy!" when asked why he didn't play 1. d4 instead of 1. Nf3?
5
Why are doubled pawns in this case particularly devastating?
4
Reasons why king and rook mate quicker than king, knight/bishop and bishop?
3
Why not fight off a bishop on row 5 with pawns?
2
When to (and when not to) play Bxc6 (i.e. BxN) as White in Ruy Lopez?
5
What should be the value change if pawns are doubled?
6
What is the point of 6...Ne8 in the f3 Nimzo?