What is the draw frequency for 3 consecutive games (same players; amateur level)?

As far as TV shows go, Mr. Robot is known for its technical accuracy. I was surprised when I heard that line, so I fact-checked it:

[Frequency of draws] is currently "holding pretty steady around 50%, and is only increasing at a very slow rate".

I understand that figure is for top-level tournaments, not 3 consecutive games from the same 2 players. Is there are any accuracy to that statement in the show? If not, is it different from the 50% rate for top-level players?

Definitely not impossible! It is true that draws are less frequent in amateur chess, and it is also true that draws are less frequent for faster games (how fast was the game in the show?), but even so, let's say that for a blitz game between evenly matched amateurs the draw frequency were 5%, or 1/20. If you played three games, the odds of playing three draws would be 1/8000, which while unlikely, is hardly "impossible". This is assuming that the probabilities are independent, which may not be entirely true but I think is close enough for a rough estimate.

I don't have an academic citation, but if you want some stats for online games you can look at the Lichess opening book: https://lichess.org/analysis . Normally it shows master-level games, but if you click on the settings you can chose to look at Lichess games instead, and filter by rating and time control. For blitz games at rating 1600, the draw frequency is 4-5%, depending on the opening move (the draw is the small gray stripe without a percentage, so you have to compute it by difference): 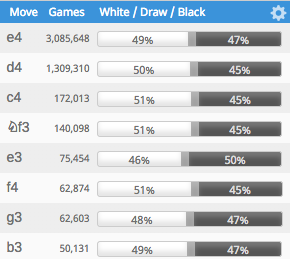 For the highest ratings, it's closer to 10% for blitz. And for classical chess, as you know, it's about 50% for top-level chess. For amateur chess I'd say maybe 10-20% but it depends on which level of amateur we are talking about. I won't cite the Lichess stats here because even though they have a "classical" category, it's really what would called rapid in over-the-board tournaments (30 min games in Lichess; OTB classical is usually 2 hours or more).

From a transcript at https://www.springfieldspringfield.co.uk/view_episode_scripts.php?tv-show=mr-robot-2015&episode=s02e04

You just need to be able to see ahead of your opponent.

But how can you when your other opponent is you? Stalemate.

Three in a row.

So the impossibility mentioned can be interpreted to be three stalemates in a row, not simply three draws. I could not quickly find a reference to the stalemate rate, but it must be significantly less than the draw rate, and the cube of it will therefore tend a bit closer to "impossible".

I don't know if the moves in the show are meant to be real games or just a nod to the audience that is looking closely (kind of like the in-jokes written in tiny print on "Star Trek" displays). But the first two are reported to be the Loyd 10-move stalemate and the final game is Minerva's fastest known double stalemate. (I don't have a copy of the video to confirm this)

Because they are "constructed" puzzles, neither would be expected in a competitive game, only a cooperation scenario. That may or may not mean something in the context of the episode.

As standard math says, probability of same event happening in a row for N times is:

where Pe is single event probability.

However there can be specific pairs of players which always plays at optimal strategy for each-other, so that their games mostly ends in a draw.

12
What is the proper way to ask for a draw?
8
What are the different rules for claiming a draw?
1
For long OTB games, what is the percentage of players who have a rating which is below X FIDE Elo?
5
What is the percent of players in the top X that are women for different values of X?
15
Are there statistics on the results of armageddon games at the GM level?
2
Draw rates in classical chess between elite players?
4
Is it true that amateur players tend to choose the advance variation after 1. e4 c6 2. d4 d5?
13
What is the meaning of “dead draw”?
24
Are chess players getting better, given the same rating?