In the opening stage, can we determine that one move is better than another by looking at winning percentage?

After 1.c4 Nf6 2. Nc3 g6, thousands of games have been played with the following two moves of white: 3.g3 and 3.e4. It seems that the winning percentage suggested that 3.e4 is clearly better than 3.g3, though interestingly, more games are played after 3.g3 than 3.e4. 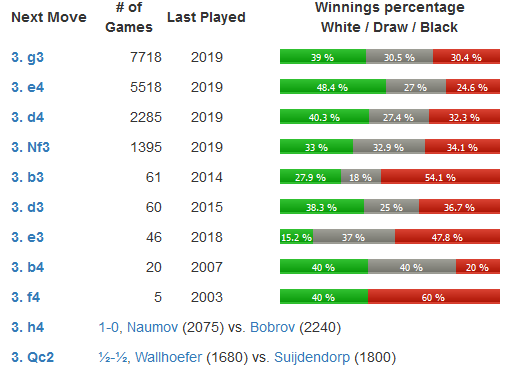 So my question is that, can one conclude that 3.e4 is better than 3.g3 based on the winning percentage?

The precise answer depends largely on the database, and the answer is still never yes.

If the database includes any players below 2500ish OR it includes blitz or rapid time controls, do NOT attempt to rely on these percentages. Inaccurate moves were likely played and possibly "moved to the top" of the possible moves.

You could possibly rely on percentages for main lines with high rated players and long games, but it's still a little risky.

I would recommend looking instead at established opening theory books/websites as well as Stockfish.

The percentages are simply one of many indications of a move's strength. Generally you should pay more attention to the number of games a move has, since that tells you if it's the main line or not.

tl;dr Not reliably, no.

Every single database suffers from the exact same flaw (among others) when calculating winning percentage -- the bias introduced when lines are refuted. Players, especially today's players, will react far more quickly to a change in evaluation than the database results will. When the evaluation of a line changes, the lines players go into will change before the db accumulates enough data to make a big difference in the score.

Let's say there's a variation that has traditionally favored White. When you look at the winning percentages for it, you'll see a big White plus (let's say it's 50 wins, 80 draws, and 10 losses, for about 64%). Now a GM unveils a novelty 6 moves into it that completely reverses the evaluation. Word spreads, and let's say the next results show 1 win, 1 draw and 4 losses for White, at which point White decides to move on to greener pastures.

The line is bad for White, as those games revealed, which is why White stopped letting it happen. But there are more games in the db without the new idea than with it, so the winning percentage still shows an edge for White until you travel 6 more moves down the tree. That same position which before was 63%, now shows 62%, still a really good edge to White, yet its current state of results is more like 25% for White, very little short of disastrous.

You can try min/maxing from a deeper level to try and solve this, or you can limit chronologically the games you search, but both approaches while lessening that effect, will introduce biases of their own in the data.

Bottom line is never trust the win percentages from a db. They're useful as one indicator of the quality of a variation, but there are other considerations that can outweigh them.

There's no real utility in even searching for an "objective" best move, because you're human. You will play some positions better than others because you like them and understand them better than others. So you may conceivably get better results playing an objectively worse alternative. No one plays every position with the same skill; it's a goal top players strive for, but no one attains. Spassky lost the 1966 match with Petrosian in part because he tried to be that universal player, tried in some games to "out-Petrosian Petrosian." so to speak. He didn't try that approach in 1969, and instead concentrated more on what he did best, and won.

I use the opening percentages when I review my games - never before.

Sometimes I'll see that my opening scores "70%" for my opponent - not good for me, even if I did win. So why did I win?

After looking at why it scores so high for my opponent, I see he missed a good move.

But even then, the move has to be so good, it's forcing - as in, it's actually a trap. However, most of the time it only leaves my opponent with an advantage of 0.6 in his favor. I can live with that.

Where were your data taken from? What do you know about the population? If the stats were the last 10 years of GM Tournaments around the World, well that would be a good guideline for two things:

What value do those data have if taken from online chess games though? Well since the ELO rating in that case has greater variance and the intentions, timeouts also vary, since it is not a tournament that you give your best, you just play a game on the internet, you should take those data with a huge grain of salt, as you were already told. The data do not determine anything in this case.

If the data were for internet games, you get what they just tell. At average you should prefer a move from another on an ONLINE game.

They are a useful guide to the beginner to decide which are the better moves to consider and which ones are not worth the effort.

They are merely the statistical result on many games and do not guarantee anything about the current game if you choose that move.

The results are skewed as you need outright wins to win a tournament not just a good winning percentage. Playing for wins results in some losses too.

It would be better if they showed average score percentage as well as the win loss draw numbers. And sort them by winning score for comparison fairly to the sorted by average winlossdraw ; versus as shown in the OP which uses popularity of move to sort the display.

14
Is the Grand Prix Attack a poor response to the Sicilian?
4
Why different openings are used by computer players?
3
Why 6.Nc3 in the following position in Grob opening?
5
Are there any lines in the Lopez Opening / MacLeod Attack that are actually good for White?
6
Meaning of winning percentage
5
"A better move" recommended by chess.com but almost never played?
4
After 1.e4 e5 2.Nf3, is 2...Nf6 safer and easier to learn than Nc6?
4
How does one determine if a book move is objectively better than another?