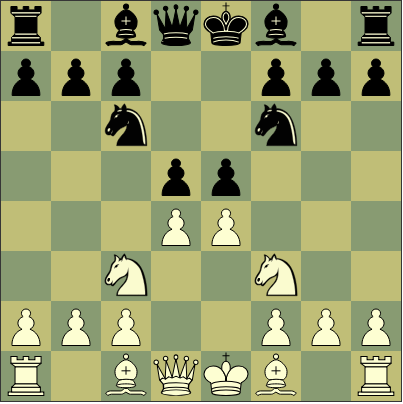 If black 'mirrors' whites 4. d4 in the Scotch 4 Knights and white wants to play sharp, aggressive moves. what would be the best move? I know that chess engines like stockfish, GNU Chess etc. would calculate the next move for white as Bb5, but I want to exchange pieces. So what would the strongest capture be here?

Here’s a site PDF that I found that goes really in depth on the Scotch Game and other variations of opening play: https://terrycucf.weebly.com/uploads/1/9/2/9/19295043/various3rd.pdf

I hope that it helps you!

4...d5 is really bad, if nothing else it leads to at least a clear pawn up for white in various lines that can ensue and they all involve frequent trades as well (as you desired), here are a few options starting from Nxe5 (a choice well in line with your preferences) leaning on more aggression/direct play and less positional compared to some of the other choices (like your suggested move):

Note: Bear in mind that by intentionally opting for lines such as above where you favour trades and direct aggression, you'd be naturally walking into highly tactical positions, so be prepared to calculate many many relevant lines at each point (specially in the given examples above).

Not the answer you're looking for? Browse other questions tagged opening four-knights or ask your own question.

12
Should I recapture the queen with my king or knight in the Scotch Game?
13
How to reach an open position in the 4 Knights Game without exchanging too much material?
8
What are some good books on the Caro-Kann which propose a Black repertoire based on positional, strategic, solid, boring and quiet variations?
2
5…Nf6 in Sicilian defense
2
How is White compensated in these lines of the Milner-Barry gambit?
11
White's reply against Reti advance (2…d4)
6
Why develop knights before bishops?
4
Exchange in the Scotch Four Knights
5
Why 7. Bd3 in the 3 knights opening?
8
Is this the only opening that allows one side to end up with three knights?