"A better move" recommended by chess.com but almost never played?

I played a game starting with

Black's next move is 5... Bg4 and it was considered by chess.com as 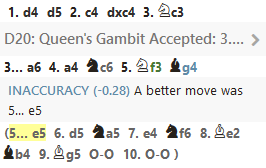 But according to 365chess.com, the move 5... e5 is seldom played while 5... Bg4 is more popular with a high winning percentage for black. Why does chess.com consider 5... Bg4 as an inaccuracy? 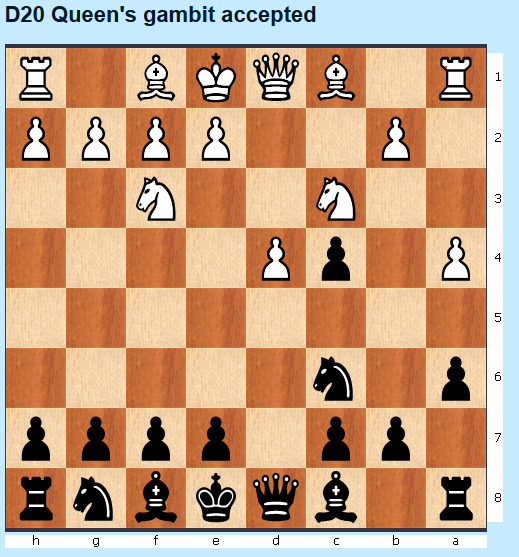 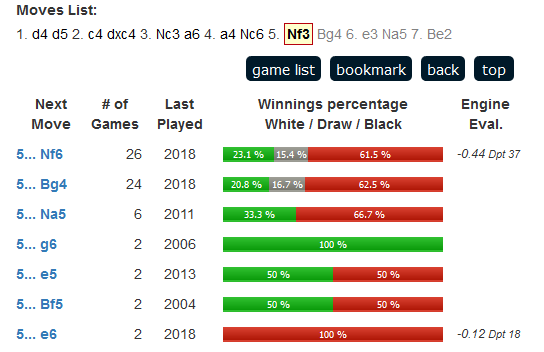 Chess.com listed this as an inaccuracy because the engine is running at a limited depth, only looking at each move for a few seconds.

When I put the position after 5...Bg4 into Stockfish, it gave an evaluation of +0.12 at 16 ply. But at 18 ply, the evaluation dropped to -0.38. Most likely if you had run the analysis at "maximum" (which I realize is locked for non-premium members) the engine would have analyzed enough to know that 5...Bg4 was not an inaccuracy.

Maybe chess.com's engine is better than my Deep Fritz, but that's not really the point. Engines consider one move in the opening to be a bit better than another all the time. It's important to take such differences with a grain of salt: if both moves are playable, choose the one that's easier/more practical to play.

In your scenario, 5...Bg4 clearly looks more comfortable than 5...e5. You're developing a piece and putting pressure on White's knight (which defends the d4-pawn). Meanwhile with ...e5, you're inviting White to push your knight offside.

Not the answer you're looking for? Browse other questions tagged opening queens-gambit websites queens-gambit-accepted or ask your own question.

14
Is the Grand Prix Attack a poor response to the Sicilian?
3
In the Queen's Gambit Declined, after 1. d4 d5 2. c4 e6, what is the difference between playing 3. Nc3 and 3. Nf3?
4
Why is it said that beginning with 1. Nf3 2. c4 avoids the Benoni but beginning with 1. d4 2. c4 does not?
11
What is the disadvantage of the move 3. ..h6 in the Queen's Gambit Declined?
1
How do I make my opening reportorie stronger, specifically my Grand Prix Attack against high level competition?
4
Is 1.d4 2.Nc3 3.Bf4 bad?
5
Not Developing a Piece in the First Five Moves
6
Are there any gambits which yield an advantage for the side down material?
6
Why aren't early opening moves generally given exclamation marks?
4
Why does Black play b6 in these lines of the King's Indian?