I am aware of related questions and great answers on the same topic such as Understanding AlphaZero. My questions are related to the following figure on AlphaZero's search procedure 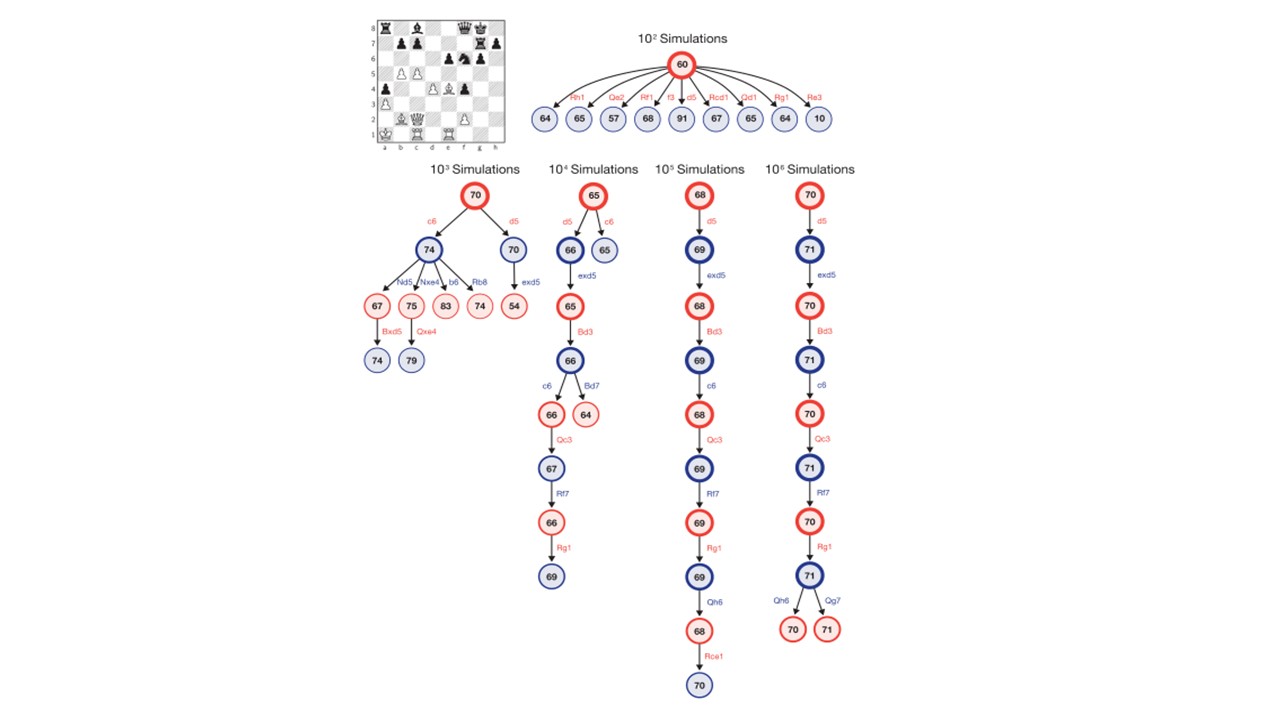 This figure comes from the Science paper on AlphaZero (Fig. 4, page 4). The search is illustrated for a position from the very nice game 1 AlphaZero (white) and Stockfish (black) after 29. ... Qf8. The rest of note of the figure is as follows

The internal state of AlphaZero's MCTS is summarized after 10^2, ..., 10^6 simulations. Each summary shows the 10 most visited states. The estimated value is shown in each state, from white's perspective, scaled to the range [0, 100]. The visit count of each state, relative to the root state of that tree, is proportional to the thickness of the border circle. AlphaZero considers 30.c6 but eventually plays 30.d5.

I would appreciate some insights regarding the following questions. (Important to note that I am a mere chess player with no knowledge on computer science. I still find this fascinating)

The diagram shows the 10 most visited game states/positions that AlphaZero calculated. It's actually looking at thousands of positions, but they're only showing the 10 positions that it comes back to the most. For your questions:

1) AlphaZero's search algorithm is called Monte Carlo Tree Search (MCTS). The fundamentals of how it works when thinking at some game state:

The move that has the best average score in all its playouts is the one that AlphaZero picks. There's more involved than this, but the above is the general idea of MCTS. So something like 10^2 simulations for the root node means that AlphaZero performed the above algorithm 10^2 times for that position.

The part where they mentioned "800 simulations" refers to when AlphaZero was learning (before its games with Stockfish). The way AlphaZero learns heuristics on its own (which allow it to accurately evaluate positions) is by playing itself over and over. So, I assume they mean that during this phase of playing itself, each time it thought on what to play in a position, it only performed 800 simulations from a position. The point of this was probably to have time to get more practice games in. Against Stockfish, playing extremely quickly is unnecessary, and AlphaZero may as well use the time it's been given to playout way more such simulations.

3) Yes, thousands of other moves are also considered, they just aren't shown in the diagram. Also, even if the 10 states shown were the only ones reached, you couldn't just average their scores out. The reason is that some game states are reached more often than others, and thus have a higher weight in the average calculation.

4) Yes, only an illustrative sample is shown since they only wanted to show the 10 most visited game states. I'm sure AlphaZero continued the MCTS algorithm far past 34.Rce1.

Not the answer you're looking for? Browse other questions tagged engines alphazero or ask your own question.

61
A purely self-trained chess AI
3
In a ChessBase opening tree how can we put a column that displays the percent of time each move is played or a column that displays "Perf" minus "Av"?
2
What would approximately be the ICCF rating of a GM with no external help and of a computer with no human judgment?
35
Understanding AlphaZero
3
How does Allie's search algorithm work?
5
Does Google's new quantum computer mean we will soon have a more powerful AlphaZero?
3
Moves per depth in search engines
3
Breadth-first search vs Depth first search in knowledge-based chess engines