Alpha Zero defeated Stockfish after only 9 hours of self-play. On the other hand, Lc0, has been training for several months and while attaining impressive strength (to say the least...) it's still not crushing Stockfish. What can be the reason for such a dramatic difference in learning efficiency?

In short, because DeepMind has TPUs. Lots and lots of TPUs.

From the DeepMind paper published December 2017 (emphasis mine):

We trained a separate instance of AlphaZero for each game. Training proceeded for 700,000 steps (mini-batches of size 4,096) starting from randomly initialised parameters, using 5,000 first-generation TPUs to generate self-play games and 64 second-generation TPUs to train the neural networks.

To achieve the level of performance that AlphaZero got against the (sub-optimally tuned) Stockfish version 8, the training run took about 9 hours and 44 million self-play games for chess:

Meanwhile, the Lc0 project got started sometime in January 2018, and by April 2018, they'd only generated 8.2 million out of the needed 44 million games. I believe they were generating about 200k games per day at the time.

They also came across a lot of bugs in the process and were figuring out a lot of things as they went, so when the first training run plateaued, the best net was not as good as AlphaZero. Since then, the Lc0 project has actually restarted the training run multiple times:

To get a sense of how well Lc0 is doing compared to AlphaZero, it's more useful to look at the Elo with respect to total number of games generated, not time elapsed. Here's what the graph looks like for the entire Lc0 project as of January 14, 2019 (note that this is self-play Elo, which is inflated compared to actual Elo): 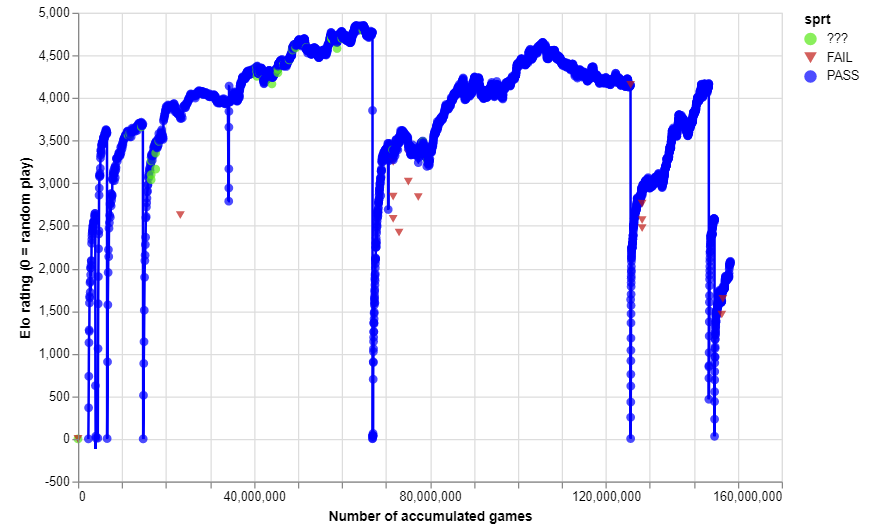 As you can see, they've reset the training run many times. There were also a number of bootstrap mini-resets during the original main run to fix some critical bugs, and there was also a temporary test35 to test the newly revealed configuration settings from the December 2018 AlphaGo paper. Yep, this isn't confusing at all! (/s)

There are lots of calculations and graphs in this spreadsheet here that compares lc0's performance with AlphaZero. For example, here's the graph from the first old main run (under the "Graphs" tab): 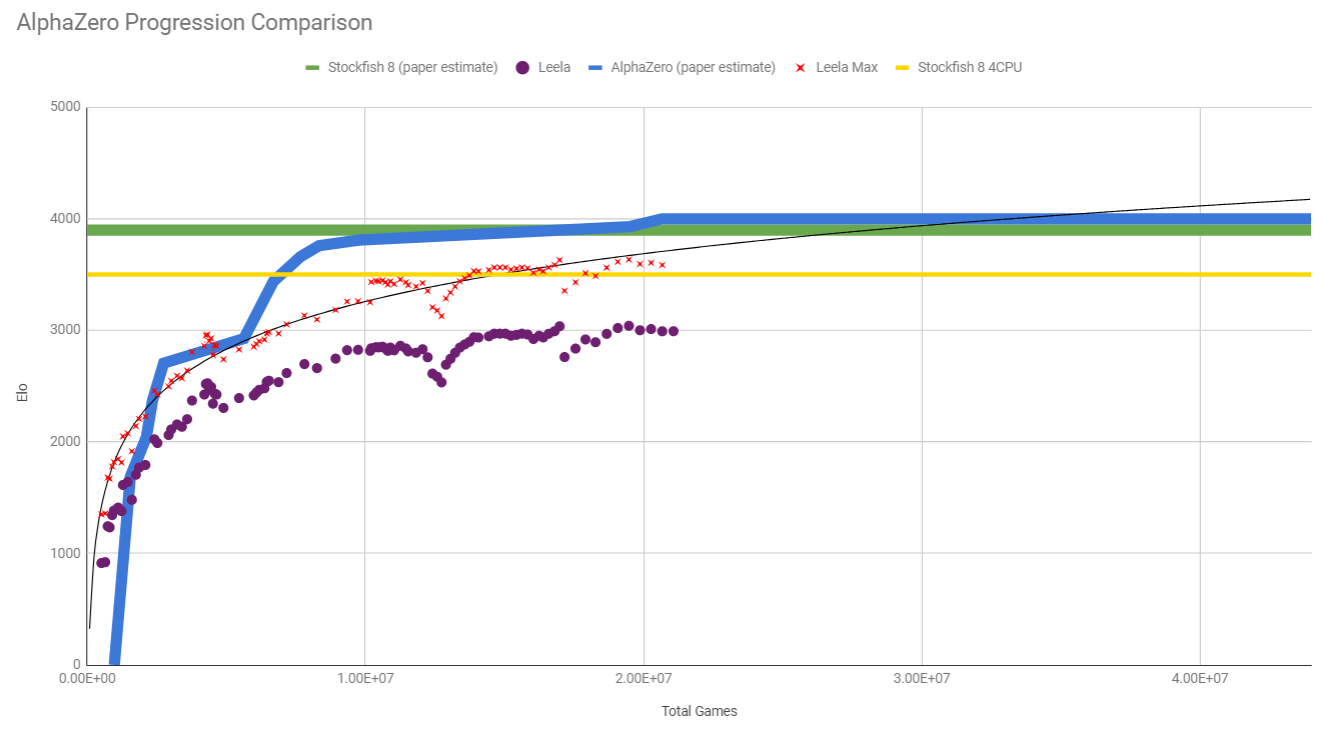 From that link, an explanation of what "Leela Max" is:

"Leela Max" is Leela's theoretical maximum performance when given hardware and/or time to the point of absolute diminished returns. It may be more comparable to AlphaZero, as AlphaZero operated on 4.8 million nodes per move, whereas a conventional setup only gets a small fraction of that.

These days, the self-play generation speed is much faster than it was at the beginning. As of January 14, 2019, it looks like the project is generating about 1.5 million games per day. But at this speed, it'll still take a month to achieve what DeepMind achieved in 9 hours. More like double the time, really, if the training games are being diverted towards two separate runs.

This is happening because AlphaZero and Leela aren't playing against the same Stockfish. If you read the paper, AlphaZero beat Stockfish 8 (it also played a series against Stockfish 9 - same logic applies however). Both these versions of Stockfish are old, and significantly inferior to the latest version of Stockfish.

On a side note: it's not clear that AlphaZero would crush Stockfish 10 either, or vice versa, because elo isn't transitive: if A beats B by 50 elo and B beats C by 50 elo, it doesn't mean that A beats C by 100 elo.

Edit: To illustrate, in the TCEC cup semifinals, Leela vs. Stockfish, the version of Stockfish that played was Stockfish 270918. The last six numbers is the date - Stockfish as of the 27th of the 9th month of 2018. You can see from the link above that this version of Stockfish is roughly 100 elo stronger than Stockfish 8, so the fact that Leela performs worse against it is not a surprise.

21
A new AI wins at go. Can a similar AI win at chess? Can it achieve pure self-training?
36
Understanding AlphaZero
43
How is Alpha Zero "more human"?
7
What was the source of randomness in the Alpha Zero vs Stockfish match?
2
What was one shortcoming of alpha zero that Kasparov noted?
16
Is it possible Alpha Zero will eventually solve chess?
1
Where does Leela Zero stand (in terms of ELO / strength) when compared with other AI like Mu Zero / Alpha Zero?
5
Do modern chess engines learn material values through self-play?