Is there a balanced chess system where players of unknown skill can have an equal chance of winning?

Is there a chess system where you can make players of differing skill levels compete against each other with an equal chance to win without using different chess variations?

This system should give good players and bad players a level playing field where both of them can win.

The way I've done this in the past is to play a series of games with clocks starting with 10 minutes each on the clocks and then the rule for subsequent games that the winner of the previous game gets one minute less and the loser one minute more. This quickly stabilizes at a level where both players have good chances of winning.

A common way to have a large number of weak players have a chance at beating a single strong player is simultaneous chess: 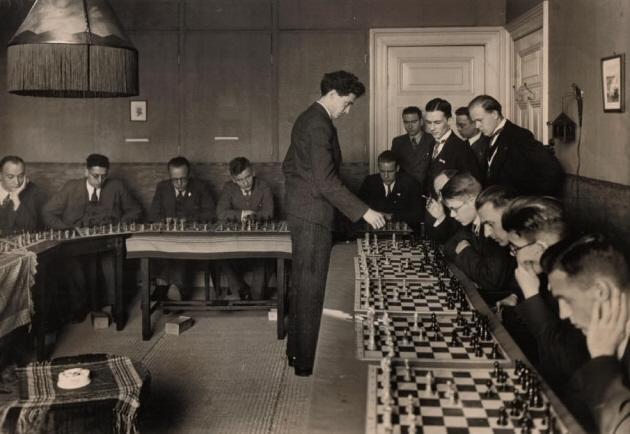 The handicap of the strong player can be adjusted by adding or removing opponents.

...players of unknown skill can have an equal chance of winning...

This sounds like you want to take the player's skill out of the game which goes against the spirit and rules of chess, I would say. You could introduce elements that equalize skill differences but you may end up with a completely different kind of game, which you wanted to avoid.

Indeed one could switch sides at random times as RemcoGerlich pointed out, and it would formally solve your problem, but in that case winning would be very much meaningless.

That's why I conclude that no, there is no such way. Either the stronger skilled players will win more often in chess, or the definition of winning becomes meaningless and some other kind of metric depending on the skill (like the handicap) emerges or it's simply not chess any more.

The ultimate handicap is teaching.

You might be able to develop a clever handicap system where players have to "play their best" to beat the opponent with a specified handicap. Go actually has this, though one quickly progresses to the point where a 2 stone handicap is too much. If you do this, you quickly create a game of "you vs. nature" The game becomes a zero-sum game and it really changes how it feels.

However, if your goal is to create situations to help teach the newer player, it doesn't matter how skilled you are. You are no longer playing on the board. You are playing in the mind. And, honestly, we can all use a little practice in our quest to become a grandmaster at that.

3
New chess variant (opinion required)
3
Chess variants where black is considered equal?
14
How to weakly solve Tiger Hunt, Atlantis Chess and Peasants' Revolt
5
On how to learn Xiangqi (Chinese Chess) or Shogi (Japanese Chess)
8
What is this battleship-style chess variant called?
3
When can king and pawn win against another king and pawn?
9
(Unbalanced) Double-Move chess - can white force a win?
14
In Hand and Brain chess, is the stronger player generally preferred to be the hand or the brain?