What is the simplest method to win Queen vs Knight endgame?

What method requires the least amount of memorisation (doesn't have to be shortest path to victory) for the queen vs knight ending?

I have looked at tablebases but the moves are somewhat bizarre and it would be nice to have some simple logic to follow (even if it takes a few more moves to checkmate).

This is assuming the opponent is expert and will not make simple mistakes.

Always keep your K and Q on opposite colour squares, or have your K diagonally 1 gap away from the N, so that you will never be forked.

Beyond that, just as Glorfindel said, fork the N if it's allowed or drive opponent's K to the edge and checkmate.

I have looked at tablebases but the moves are somewhat bizarre

That's the problem with tablebases; they're efficient but they can't 'play' human chess. This particular endgame is one-sided enough that it's almost never required to play the best move.

Just drive the opponent's king to the edge of the board, as you would do with king+queen vs. king; just be careful that you don't end up in a knight fork. If the knight gets too far away from its king, you can probably fork it yourself after a few checks. Once on the edge of the board, the reduced mobility of the knight and mating threats will eventually lead to defeat.

Here is an example (from Shredder Chess): 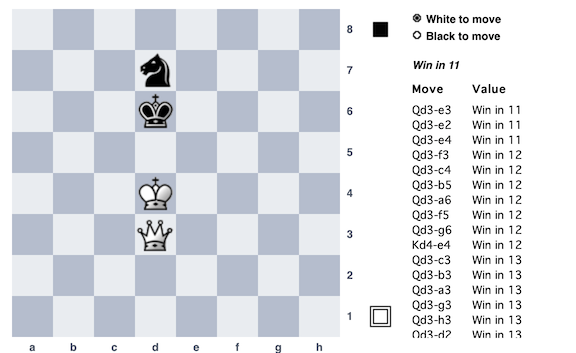 Not the answer you're looking for? Browse other questions tagged endgame queen-and-knight-endgame or ask your own question.

30
Can a rook win against a knight in the endgame?
13
Endgame - pawnless Queen + Rook vs Queen
5
Can White win this knight endgame?
6
Knight & Bishop vs. Queen
0
How to win against queen with queen+rook, avoiding the draw with multiple checks
9
How often does each side win in Rook, Bishop and Knight versus Queen?
3
Marshall vs. Queen Endgame
7
Can a King and Queen mate a King and Knight or is this a drawn game?
4
What is the farthest away a game can be from a guaranteed checkmate?
1
Interesting knight vs bishop endgame